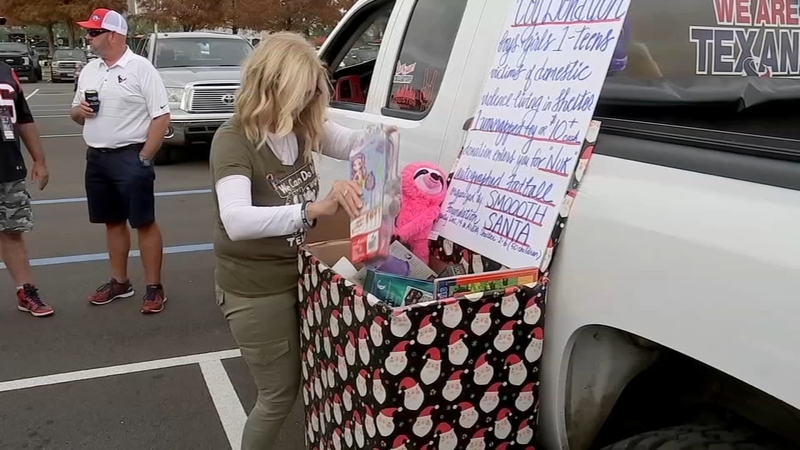 HOUSTON, Texas (KTRK) -- Texans fans are bringing more than food to the tailgating lots at NRG Stadium to help children who could use a boost this holiday.

Pati Cream is a part of the 'Nuff Said tailgating group that is hosting a "Fansgiving" feast ahead of Thursday's game.

"I can dress up and I can put a little flour on my face if it looks a little better if I pretend I cook, but no, I don't cook," Cream jokingly explained.

She may not be a master chef, but she's good at organizing her tailgating friends to give back.

"I've had people message me that they're walking over from the green lot (and) from the orange lot," Cream said.

Texans fans aren't asking what dish to bring to her blue lot location: They want toys.

Cream is collecting toys for children impacted by domestic violence. If you donate, not only will you help a child, you also have a chance to win an autographed football from Texans star DeAndre Hopkins, also known as "Nuk."

"I thought the incentive of bringing in a Nuk ball would bring more toys in, because everyone loves Nuk," Cream said. "Nuk is the bomb-dot-com."

Cream got the ball because Hopkins' family is behind the drive. His mom, Sabrina Greenlee, runs the group called SMOOOTH, Inc.

According to the group, SMOOOTH stands for "Speaking Mentally, Outwardly Opening Opportunities toward Healing," and focuses on raising awareness about the effects of domestic violence.

Next month, 50 children impacted by domestic abuse will get an array of toys.

"If we can make it happen and give them more, that would be a blessing, but at least two is the goal," said SMOOOTH, Inc. director of media, Kristina Dorsey.

Toys can be dropped off at three Houston-area locations. Thanks to Texans tailgaters, toys are also being collected at the next game, which will be Sunday, Dec. 1 against the New England Patriots.

"We get a lot of support just in general from the Texans community, and they're always willing to help," said Dorsey.

SMOOOTH, Inc. is working with Aid to Victims of Domestic Abuse, also known as AVDA. The organization provides legal support to victims.

The group said the toy drive will boost kids, but it will also impact their parents.

"The joy for the parents will probably be exponential. Just having the opportunity for their children to receive something when they're not able to give them something," said AVDA CEO Maisha Colter.

A willingness to help is why Cream said Texans fans are some of the best in the country.

"It just rips your heart out that these kids may not have nothing, and may not get nothing, and because of my friends, or my friends' big hearts, they're going to have a lot," Cream said.

To learn more about drop off locations, click here