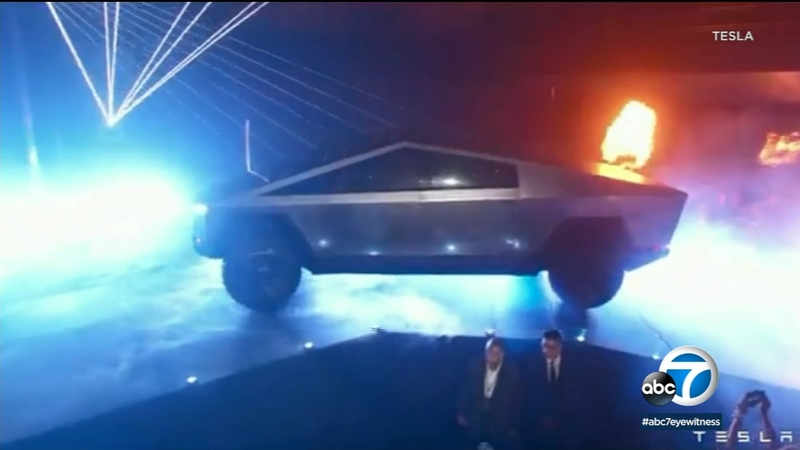 The CEO of Tesla unveiled a new electric pickup called the Cybertruck on Thursday at the company's design studio in Hawthorne.

The futuristic truck looks like no vehicle on the market.

Musk said inspirations for the angular design include a James Bond car and fighter jets.

Cybertruck design influenced partly by The Spy Who Loved Me https://t.co/HKBzxFNfzm

"Trucks have been the same for a very long time," Musk said. "Like 100 years, trucks have been basically the same. We want to try something different."

As part of the unveiling, Musk demonstrated the truck's durability. A sledgehammer was taken to the side door twice and it made no noticeable dent.

Metal balls were thrown at the windows. They made substantial golf-ball sized cracks, but did not penetrate through to the interior.

The window cracks seemed to take Musk by surprise, as he said in earlier testing they threw objects at the windows and the glass had not broken.

"Well, maybe that was a little too hard," he joked about the throw.

The unveiling drew heated reaction on social media, much of it ridicule. Some called it a combination of an El Camino and a DeLorean, others likened the design to a child's drawing of a car, or a low-resolution computer graphic.

With the launch, Tesla is edging into the most profitable corner of the U.S. auto market, where buyers tend to have fierce brand loyalty.

Automotive industry analysts say Tesla's pickup is more likely to appeal to weekend warriors who want an electric vehicle that can handle some outdoor adventure. But it could end up cutting into Tesla's electric vehicle sedan sales instead of winning over traditional pickup truck drivers.

"The needs-based truck buyer, the haulers, the towers at the worksites of the world, that's going to be a much tougher sell," said Akshay Anand, executive analyst at Kelley Blue Book.
Tesla has struggled to meet delivery targets for its sedans, and some fear the new vehicle will shift the company's attention away from the goal of more consistently meeting its targets.