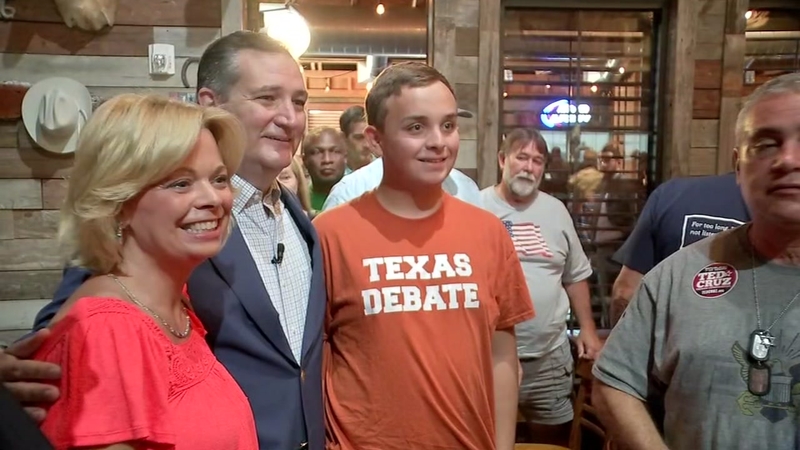 'THIS IS A FIGHT,' Sen. Ted Cruz says on reelection bid

HOUSTON, Texas (KTRK) -- Texas Sen. Ted Cruz admits his reelection campaign is a real fight and wants all "freedom-loving Texans" to make sure they vote in November.

Cruz is spending the week-long senate session break campaigning in his home state, from San Antonio and Seguin on Monday to Houston and Pearland on Tuesday.

"There is no doubt this is a real race," Cruz told Eyewitness News. "This is a fight because the hard left is energized, and you underestimate anger as a political motivator at your peril. The anger on the left is real. And so I think the urgency for conservatives, the urgency for Texans who don't want to see us turn into California needs to be real as well. "

O'Rourke doubled Cruz's fundraising in the last reporting period and has consistently outraised the former presidential candidate since reporting began for the 2018 cycle.

Cruz said much of that money comes from out of the state and he's not sure of the veracity of the polling. But he does know this campaign is tight. He told a packed house at Big Horn BBQ in Pearland that complacency is the biggest enemy of any campaign.

"If we turn out freedom-loving Texans, we're going to keep this state bright red," said Cruz, "but we've got to make sure people show up and vote. "

Cruz said he'll spend all of the remaining days on the trail trying to rally the troops and, he said, help them understand the contrasting ideologies between the candidates.

"There is no election in the country where there is a starker divide between the positions, between the record, between the vision of the two candidates," he said.

From Houston, Cruz heads to Brownwood, Temple, and Copperas Cove before returning to Cypress on Saturday. O'Rourke is in the middle of a 34-day, non-stop tour of the state and is next in the Houston area on Thursday and Friday.