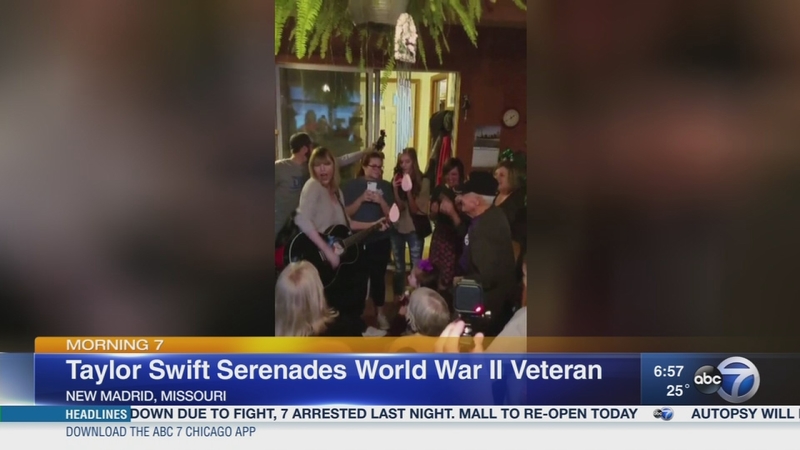 NEW MADRID, MO -- At age 96, Cyrus Porter is a devoted Taylor Swift fan. He's traveled from his rural Missouri home to St. Louis and Memphis, Tennessee, to see her in concert.

On Monday, in the midst of a thunderstorm, the concert came to the World War II combat veteran, a surprise visit from the singer and her parents.

He had hosted 72 people for a family Christmas a day earlier. Many of his relatives were still there when a van pulled into the driveway of his home in New Madrid, about 130 miles south of St. Louis.

"My daughter opened the door and said, 'It's Taylor Swift!'" Porter told The Associated Press on Tuesday. "I couldn't believe it. It's not a miracle but I'd say it's pretty close."

Swift spent about an hour talking with Porter and family. Then, on the enclosed back porch, she sang her 2014 No. 1 hit, "Shake It Off," with dozens of Porter's relatives joining in.

"The whole family was singing along on the back porch," Porter said. "I though the police might come by!"

Porter likes his classic country, but he has been a fan of the 27-year-old singer ever since she burst onto the music scene as a teenager.

It wasn't clear how Swift came to find out about Porter's fandom, but he said that he was "proud of her to take the time out to do something like that for an old country boy."

After fighting in Germany, Porter spent decades working and farming in Missouri. He's been married to his wife, 89-year-old Harriett, for 69 years and raised nine children.

They have a combined 49 grandchildren and great-grandchildren. "We had 49 stockings on the wall for Christmas and each of them got a $2 bill!" Porter said.

He was still basking in the glow of the large family holiday when Swift showed up.

"It's really special she takes time out to do something like that," said Porter's daughter, Carolyn Allred, 66, of Bowling Green, Kentucky.