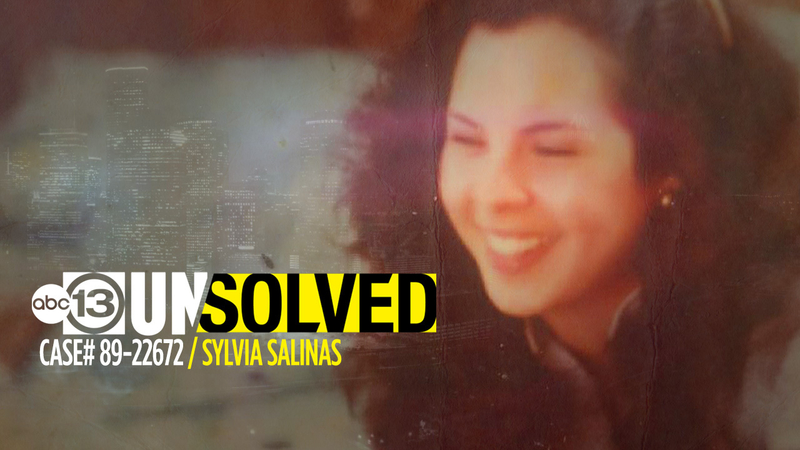 GALVESTON, Texas (KTRK) -- On Halloween day 1989, a Galveston woman was robbed and stabbed to death in her own grocery store. Decades later, detectives are re-evaluating old evidence after we brought this story back into the spotlight.

One of the most valuable items in the case file is the video tape of the crime scene. Hours after Sylvia Salinas was murdered, detectives arrived and recorded the scene.

The former grocery store was located at 31st Street and Avenue Q. In the video, a crowd can be seen outside the white building with police tape blocking the front door.

The camera moves inside. There are bloody footprints on the store floor. The video is eerily silent.

Behind the cash register, Sylvia Salinas was dead. The 30-year-old store owner was stabbed through the heart.

"This is the murder weapon," said Detective Michelle Sollenberger with the Galveston Police Department, pointing to the video screen. A bloody knife is seen sitting next to a cash register.

This video has never been seen by the public, until now.

"This video is the only evidence we have left in the case," Sollennerger said.

In 2008, Hurricane Ike destroyed evidence in the Salinas case and dozens of other cold cases.

"I was super surprised to see the VHS tape still existed," said Sollenberger.

The video tells the story of Salinas' final moments. Her blood is seen on the cash register drawer. Detectives say after the killer stabbed Salinas, he or she used the knife to pry open the register and stole all the money. That triggered a silent alarm, dispatching police fairly fast.

Salinas' machete and pistol stored under the register weren't touched. That makes investigators think the killer could have been a friend.

"There's no indication she tried to protect herself," Sollenberger said. "Everything kind of points back to somebody that she knew. Either a regular customer or personal acquaintance."

"She would not let anybody behind that counter, unless she knew that person and felt comfortable with that person" said Derlis.

Derlis has not been back to the store since Salinas was murdered. Returning to talk with Eyewitness News was an emotional visit.

"It just...it breaks the heart," Derlis said, tears welling up in his eyes. "She didn't deserve to die that way. Nobody does."

Dive into an interactive experience that tells the story of unsolved murder cases in the Houston area through videos, pictures and first-hand accounts of the families and detectives trying to solve them.


Before the case went cold, about 20 men were interviewed by detectives. All of them were eliminated. But Sollenberger says fingerprints found at the scene were preserved. Now, she plans to resubmit those prints to the crime lab.

"The family is actually always the driving force in these cases," Sollenberger said. "I'm hopeful."

That's why Christine Taylor contacted us. Salinas was her great-aunt. Taylor never met Salinas, but feels a deep connection to her.

"I hear lots of stories about her," Taylor said.

When she saw our series digging into unsolved murders, she said she knew she had to call.

"To be honest, I figured it was a sign from my aunt Sylvia," Taylor said. "We got the help we needed."

"I'd like to see a witness come forward," Derlis said. "I know there is one out there."

If you know anything about what happened that day, call Galveston Crime Stoppers at 409-763-8477. As always, you can remain anonymous.

29 years later, the unsolved murder of a Galveston woman continues to haunt her family and detectives still on the case.