'Summer of Soul' will be available for streaming on Hulu and for viewing in theaters on Friday, July 2
OTRC
By Sandy Kenyon 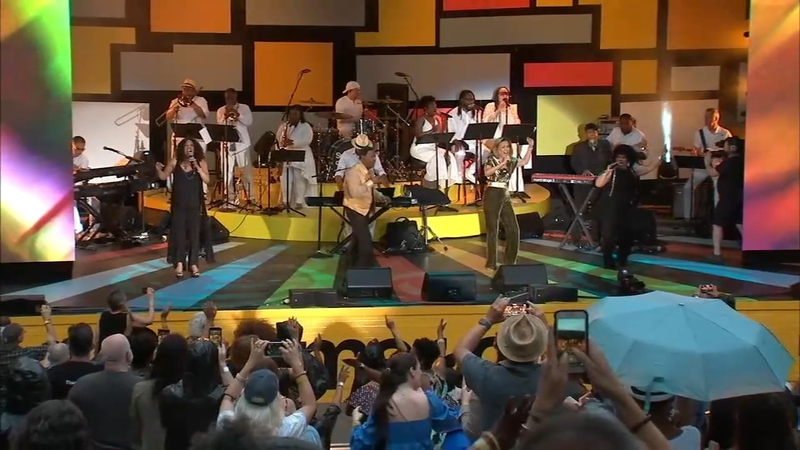 Juneteenth celebrated with special screening of 'Summer of Soul' in Harlem

HARLEM -- Many gathered in Marcus Garvey Park in Harlem on Saturday to remember a cultural turning point and to watch 'Summer of Soul' - a new documentary coming to Hulu and theaters that chronicles the Harlem Cultural Festival.

The festival happened in 1969 when concerts over half a dozen weekends came to be about much more than music. Then and now, a festive mood prevailed in the same place where the Summer of Soul happened - and like the original series of shows, it was free for the community.

HOW TO WATCH: 'Summer of Soul' will be available for streaming on Hulu and for viewing in theaters on Friday, July 2.

Musa Jackson attended the shows as a child, and never forgot the experience.

"It was just electric. It was a day where we just got to be with each other and then Nina Simone," said Jackson.

Half a century has not diminished the power of what happened when history hit a pivot point.

The music was the best that two generations of performers had to offer. But as its name suggests, 'The Harlem Cultural Festival' was about a whole lot more.

Riots had erupted the previous year, following the assassination of the Reverend Martin Luther King, Jr.

The performance by Gladys Knight and the Pips was filmed along with so many others, but the tapes sat unused in a basement for decades, until Ahmir 'Questlove' Thompson had them restored to create his first movie.

"I wanted people to take away how beautiful and magestic this moment was in time -- and this is joy, and we need it so much after the year we've had. This film couldn't have come at a better moment," said Thompson.

Its first official project under Disney's Onyx Collective brand shines a light on the importance of history to our spiritual well-being and stands as a testament to the healing power of music during times of unrest, both past, and present.

The documentary premiered at the Sundance Film Festival, where it won both the Grand Jury Prize and Audience Award.

'Summer of Soul' will be available for streaming on Hulu on Friday, July 2, the same day that the film opens in theaters.