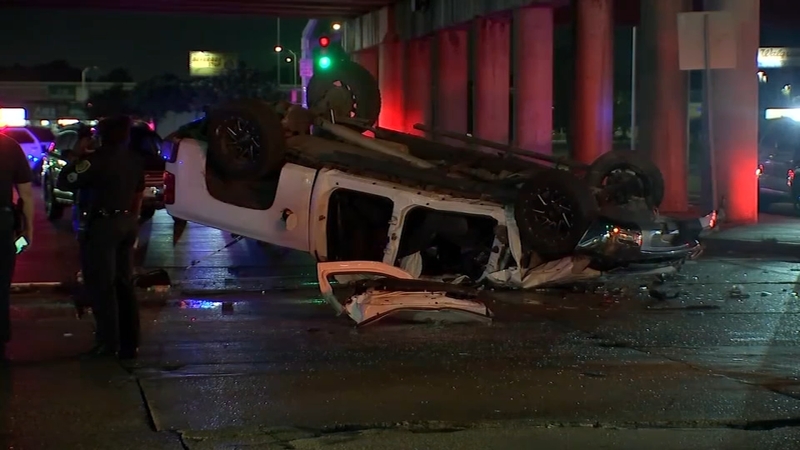 HOUSTON, Texas (KTRK) -- Street racers are being blamed for a crazy and fiery crash that sent a pickup truck with a baby inside flying off the North Freeway Thursday night, police say.

It happened around 10:20 p.m. in the outbound lanes of the freeway at Little York.

According to witnesses, vehicles were trying to get out of the way of two street racers weaving through traffic.

Another car burst into flames when it rear-ended the pickup truck, according to police. That car was also trying to avoid the racers.

The truck then fell 15 feet off the freeway and onto the feeder road.

A woman, man and a baby were inside the truck, which landed on its roof.

EXCLUSIVE: Video from the scene as a baby was rescued from an overturned truck
EMBED More News Videos

The child, who wasn't hurt, was inside a truck that fell at least 15 feet from the North Freeway after avoiding street racers.

The baby and man were not hurt. The woman is in the hospital.

Jeremy Robeson was on his motorcycle and witnessed the crash. He pulled over to help.

"It's fortunate, and I'm thankful no one is dead. It was horrific and hot," Robeson said.

"Street racers cause chaos, they are brainless and have no idea the destruction they're causing in our community. People could have been killed here today," said HPD Lt. L. Barrow.

VIDEO FROM THE SCENE: This is more of what our cameras captured that you didn't see after the crash police called 'horrific.'
EMBED More News Videos

"This is a horrible scene that could have been a lot, lot worse." This is what our cameras captured after the crash police say was caused by street racers.

"This is a major problem in the city right now. These street racers, anyone who saw anything, give HPD a call. If you have a license plate number or description, please give us a call, we want to hear from you," Barrow continued.
The racing drivers were not hurt and got away.