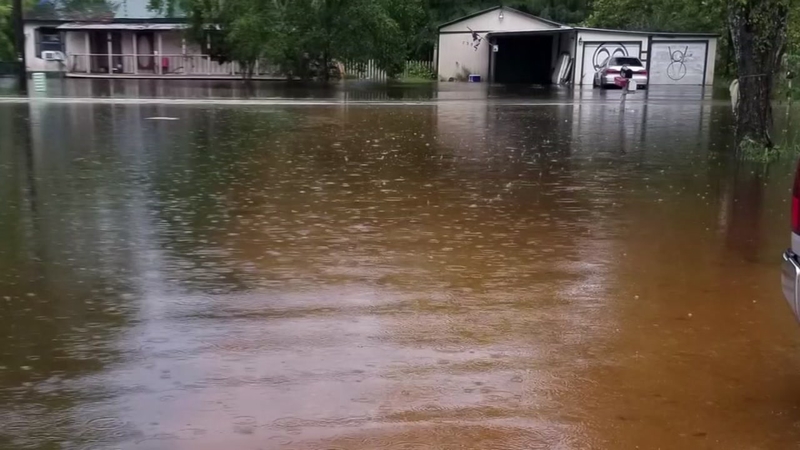 TEXAS CITY, Texas (KTRK) -- Heavy rainfall over Texas City has sent flash flooding into the streets and some homes.

The area received more than nine inches of rain, and more is expected.

Eyewitness News crews were in the area this morning, and reported that the main roads in the area were passable, but many low-lying, side streets were flooded.

Quiana Simmons Jackson says she lost everything during Hurricane Harvey, and now, her home is flooded again.

"We had to grab what we can grab. My husband is out of town," Jackson said. "My neighbors are evacuated, but they came back and they rescued my family."

Jackson is not alone. There are flooded homes all over Texas City, and many people are at a loss about what to do next.

Rainfall has temporarily ended over TX City after nearly 9 inches isolated this morning. More rain is possible moving in from the SW. Use caution as flooding of roadways continues in this area #txwx pic.twitter.com/HoeTw9EwL2

Texas City ISD cancelled school on Tuesday due to the high water. The College of the Mainland is also closed for the day.

Due to flooding in and surrounding TCISD, we are cancelling school for Sept. 11, 2018.

STREET FLOODING: This is in Texas City. Neighborhood streets are filling-up with water. No homes flooded from what we can tell right now. ⁦@abc13houston⁩ pic.twitter.com/rrgTw64YrI

STREET FLOODING: An Eyewitness News viewer sent us a photo of what it looks like on his street in Texas City. Be careful if you are headed out this morning. What does it look like where you live? If you can safely do so, tweet us your weather photos. https://t.co/mNm6i2RIDS pic.twitter.com/mjStUm7Ooq

Eyewitness News reporter Jeff Ehling is in Dickinson, where there's street flooding across from an elementary school.