'I just couldn't believe what I was seeing': Teachers relive scare after roof caves in at school gym

KTRK
SAMPSON COUNTY, N.C. -- A pair of Union Intermediate Elementary School teachers recalled their frightening experience when storms caused the roof to cave in at the school's gym during the school day Monday.

The teachers spoke with Good Morning America on Wednesday after video from inside the gym went viral.

Tanya Robinson-Freeman said her students had just finished their warm-up exercises for basketball when she noticed it was raining hard, but something seemed off.

"I noticed it was much different than anything I had seen before," she said. "It wasn't much longer when the roof started to come in on us. It took me a second to process what was going on. I looked and I was like 'oh, my goodness, this is not good.'"

Fortunately, the children ran and were able to get to safety. Robinson-Freeman said the kids got down and covered their heads like she asked.

Video footage obtained by ABC11 on Tuesday captured the scene as children dashed away from the oncoming burst of wind.
"I just couldn't believe what I was seeing."

About 90 seconds later, the stage was gone. The exterior wall crumbled. A ventilation shaft was tossed out onto the court. Yoga mats and jump ropes were strewn everywhere. Mother Nature had flexed her muscle.

Dondi Hobbs said it was baptism by fire for the children, who got a quick lesson in how to handle a dangerous situation. Her class was also in the gym at the time. All in all, the response was pretty immediate, which led to minimal injuries.

"The students recognizing what was taking place and just running...It was unnerving to have to watch them handle all of that," she said. "But then, knowing they were all safe was my ultimate concern. I'm just so grateful that they were all safe and everybody was cared for."

Three students were hurt and taken to the hospital. All three were released and hope to return to school soon.

Classes were canceled at the school Tuesday. Most of the PE equipment will need to be replaced. 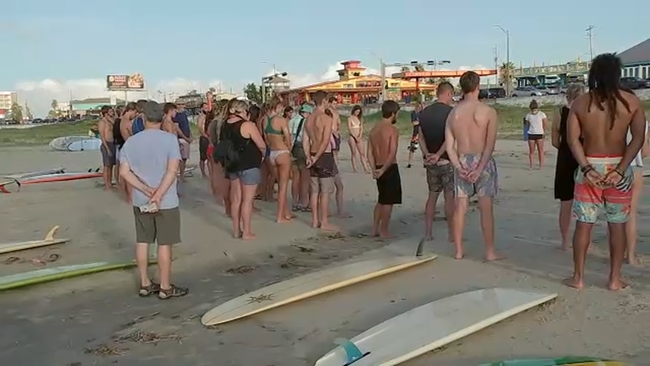 People unite in Galveston in honor of victims of racial injustice