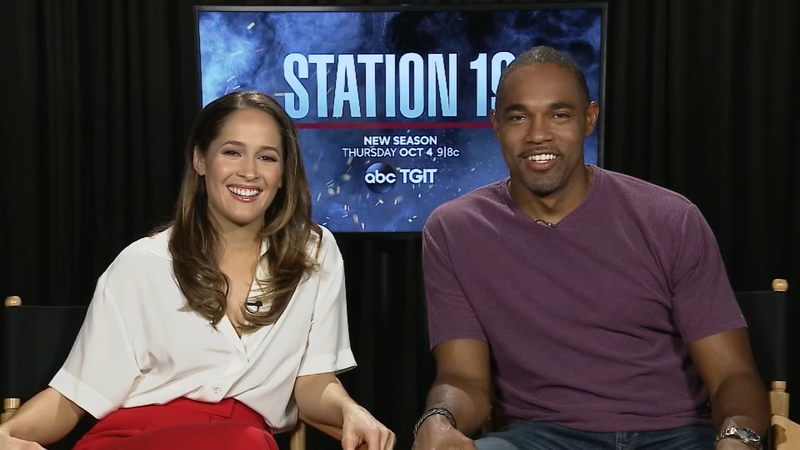 NEW YORK -- How many cliffhangers can one show leave you with? Plenty if you are watching Station 19! The Shondaland drama is back for its sophomore season. Jaina Lee Ortiz (Andy Herrera) and Jason George (Ben Warren) joined us to explain where the first episode of the season picks up.

"We start right back in the middle of the action," George said. "This first episode for season two is great because if you haven't seen the show yet, it introduces you to these characters by baptism by fire, you learn who they are. And if you have watched this show, you learn more about them than you did in any episodes previously."

If there are some deaths from the skyscraper fire from last season, we've got some new faces to fill the voids. Boris Kodjoe will join the team as a new firefighter and Dermot Mulroney will appear in a recurring role as Ryan's father.

Those aren't the only familiar faces, just as we saw last season there will be several cross over episodes and elements with Grey's Anatomy.

Well, this explains everything! #GreysxStation19 crossover episode coming at you 10/11! pic.twitter.com/ztuZ8iiu4w

"The beautiful thing about the show is we're the fire house three blocks down from Grey-Sloan Memorial," George said. "So when we run into a burning building and pull somebody out we bring them to that hospital."

This season will bring some changes for Andy. Ortiz says that her character's love life will settle down a bit and we'll get to dig in deeper to learn more about who Andy is.

"We may found out...just something, I think you will fall in love with her because you'll get to see who she truly is," Ortiz said.

Ben, meantime, is not a rookie anymore and he's celebrating a big milestone with his brothers.

#Station19 ignites your screen tonight at 9|8c on ABC after #GreysAnatomy! pic.twitter.com/GZwVCdUnb0