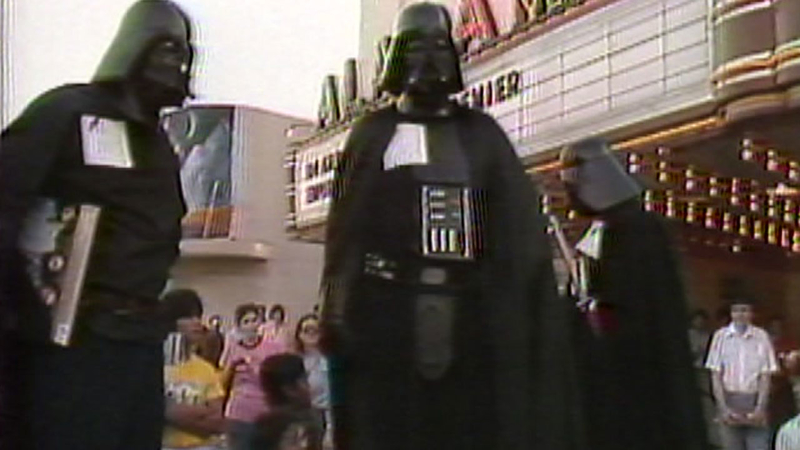 HOUSTON -- It's become almost a rite of passage: Standing in line for hours to be the first to see the newest Star Wars movie.

When the first movie was released in 1977, there was very little fanfare prior to the release of what would be a blockbuster hit. But when the sequel, "The Empire Strikes Back" came out in 1980, it was a much different story.

Fans around the country lined up to be the first to see the newest George Lucas film. Here in Houston, ABC13 was there as fans waited outside the Alabama Theater (now Trader Joe's), in May of 1980.

Three years later, "Return Of The Jedi" was released, and again it was the same story as fans line-up early to see the movie. This clip is from our Live At Five broadcast, in May of 1983.
EMBED More News Videos

Star Wars fans went through a 16-year drought with no sequel being made, so fans were overjoyed when "The Phantom Menace" hit the theaters in May of 1999. This video was shot at Richmond and Beltway 8.
EMBED More News Videos

After a 16 year wait, fans of Star Wars line-up to see the next installment of the popular series. 1999

Report a correction or typo
TOP STORIES
51-year-old on the run as suspect in corporal's ambush killing
Sergeant was to walk daughter down aisle until his hit-and-run death
Mom shares story of son's 'scary' battle with COVID complications
H-E-B's Scott McClelland retirement and what's next
Drying out but staying cool this week
LULAC set to sue Houston City Council for lack of Hispanic members
New security director aims to improve safety for Jewish organizations
Show More
IRS changes you should know before submitting taxes
Cause of death revealed for 23-year-old woman found dead after date
Texas among states suing Google over claim it's misleading consumers
Man accused of stabbing K-9 in The Heights now charged
'We knew something big exploded': ABC13 recalls moment of Watson blast
More TOP STORIES News