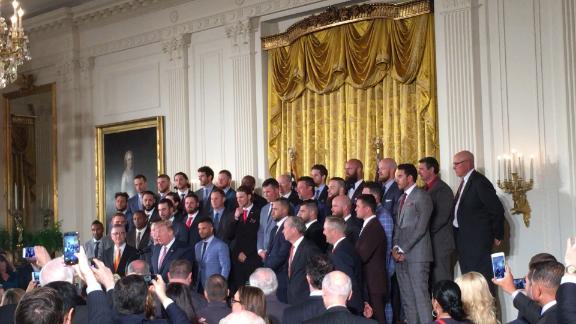 Trump hailed the Astros for their outstanding season, which culminated with the first title in franchise history, a seven-game victory over the Los Angeles Dodgers.

"To all of the players and the management of the Houston Astros, I want to say thank for being true champions on and off the field," Trump said during a half-hour ceremony in the East Room. "You really exemplify what greatness is all about. And it's a credit to the players here today."

He also praised the club for its efforts in helping the city of Houston overcome the damage caused last summer by Hurricane Harvey.

"After the devastating Hurricane Harvey, what you went through with Harvey, it was a befitting tribute, what was really a show of Houston Strong."

Besides the president, several others spoke during Monday's half-hour ceremony, including Astros owner Jim Crane, manager A.J. Hinch, GM Jeff Luhnow, and outfielder Josh Reddick, who presented Trump with a number 17 Astros jersey, in honor the 2017 championship. Although Trump is the country's 45th chief executive and has been to known to wear dress shirts with "45" stitched on his cuffs, that number currently belongs to pitcher Gerrit Cole, whom the Astros acquired in a blockbuster trade with the Pirates in January.

Shortstop Carlos Correa and closer Ken Giles were among those who were not in attendance on Monday in DC.

"Carlos Correa and Ken Giles had family obligations," said a team spokesperson. "That's why they're not here today."

Also absent on Monday was recently retired outfielder Carlos Beltran. A Puerto Rican native, Beltran has been openly critical of the the Trump administration's handling of the crisis in Puerto Rico in the wake of Hurricane Maria, which devastated the Caribbean island in September and exacerbated an already reeling economy.

"There's no doubt that I'm disappointed," Beltran told reporters in February at a Manhattan event where he was being honored. "I'm not the only one. There's a lot of people disappointed. We haven't (gotten) some benefits. Being part of the United States, you expect to at least get the same benefits when tragedies like this happen. The fact that we haven't (gotten) those, yeah, it's a disappointment."

During the ceremony, President Trump spent several minutes talking about relief efforts both in and out of the contiguous United States.

"Our administration will continue to stand by the people of Texas, Florida, Puerto Rico, Louisiana, even Alabama," said Trump. "And so many were affected, and we're standing by all of them."

Immediately following the ceremony, Texas senator Ted Cruz told ESPN: "We are ensuring that those who are impacted by the three horrific storms that happened in 2017 receive the relief they need. I worked very closely with the governor of Puerto Rico to ensure that the relief was there."

Cruz was among a couple hundred spectators that filled the East Room to watch the ceremony, which marked the first time since Trump took office that a World Series champion has made its official trip to the White House.