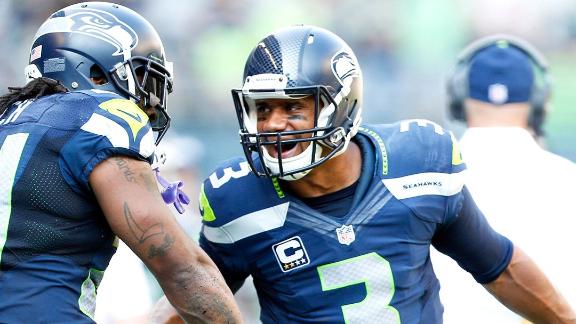 RENTON, Wash. -- Seattle Seahawks quarterback Russell Wilsonsays he was a bully as a kid and that it's time to do more about domestic violence.

"I used to beat people up," Wilson wrote for a new website called ThePlayersTribune.com. "Truthfully, I used to beat people up a lot. Many of you readers probably think I have been Mr. Goody Two-Shoes my whole life, but honestly, I was a bully growing up. In elementary and middle school, I threw kids against the wall. I rubbed their heads in the dirt at recess. I bit them. I even knocked teeth out."

Wilson is listed as a senior editor of the new website, founded by recently retired New York Yankees shortstop Derek Jeter. The introduction to The Players' Tribune says it will present the unfiltered voices of professional athletes, bringing fans closer than ever before to the games they love.

In Wilson's initial column for the site, he gives a revealing look at who he was as a boy, a much different person than he is today.

"I had a lot of anger that I didn't know what to do with,'' Wilson wrote. "Thankfully, I was saved by my faith when I was 14 years old and was able to start living for others instead of just myself. But if you've ever been at the bottom of a pile with me, you know that I still have a bit of that bully deep down inside. Just ask DeMarcus Ware."

Wilson battled the Denver Broncos defensive end for a fumble during the Seahawks' overtime victory on Sept. 21.

"As NFL players, we do not play a gentle game," Wilson wrote. "But our hits, our anger, our aggressive behaviors need to be regulated and confined to the field.

"Recent incidents of domestic violence have forced the league, its fans and the players to take a hard look into our collective conscience. To be honest, many NFL players are reluctant to address such a sensitive issue. How do you fix a problem so big and complex? How do you speak about something so damaging and painful to families? What can we do to help?"

Wilson lists what he's trying to do, personally, with a new foundation.

"I've recently launched the Why Not You Foundation,'' Wilson wrote. "I'll be raising funds and awareness for a number of worthy causes. It's a place where I plan to give back, and for my first initiative, I want us to Pass the Peace to support victims of domestic violence.

"The idea behind Pass the Peace is simple: It's a promise. I'm sharing my love for you. I want to take care of you. I am here for you."

Wilson went on to write that domestic violence is a problem that extends far beyond the NFL.

"It's not unique to my profession," he wrote. "It's not confined to America. All over the world, right at this moment, men, women and children are taking refuge in anonymous shelters. Many more are suffering silently, without protection. Every day, up to 10,000 Americans are turned away from shelters due to lack of resources.

"This issue is much bigger than NFL suspensions. Domestic violence isn't going to disappear tomorrow or the next day. But the more that we choose not to talk about it, the more we shy away from the issue, the more we lose."