Simone Biles on training, dating and her future 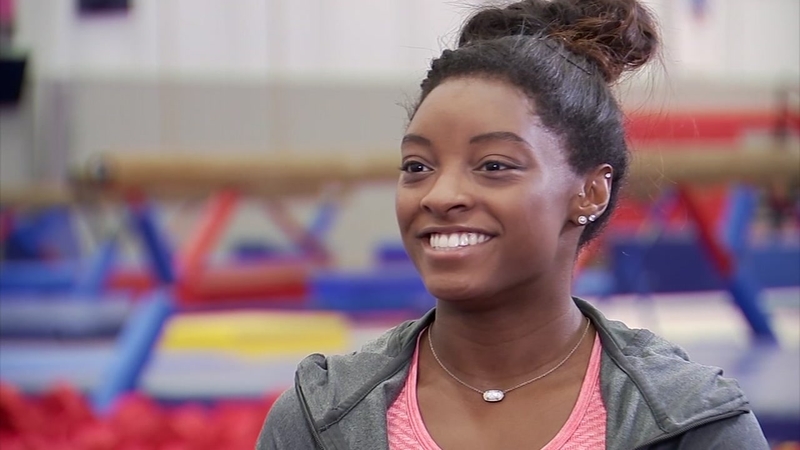 SPRING (KTRK) -- Simone Biles dazzled Houston, and the world, during her historic gymnastics performance in the Olympics in Brazil. She's admired around the world as one of the most decorated athletes in history, including 14 world championship medals. And now she's back in Houston training with a new coach, but pursuing a familiar goal.

Simone is back in the gym her parents opened in Spring Texas, the "World Champions Centre," where she is preparing to write a new chapter of gymnastics history. She's got her eye on Tokyo Olympics 2020.

When asked if she still loves the sport, Simone admitted, "It's a love /hate relationship once you get to certain level in your sport. You're so dedicated because you love it. And you hate it at the same time because you're always in here and you feel like that's the only thing everyone can talk about. So it drives you nuts."

That's why Simone, much to some of her fans' disappointment, took a true one year break from gymnastics after winning five medals in Rio. She even skipped the World Championships she has dominated.

Simone challenged herself in a new arena and made new friends on Dancing with the Stars - an endeavor that turned out to be harder than she thought.

"Especially dancing in heels," Simone said. "I barely know how to walk in and then them tell me to dance in it and I'm like, 'Do what?' But it was fun."

We watched a fashionista emerge, strutting the red carpet at A-list events, including being crowned the Female Athlete of the Year at the ESPYs.

"It was crazy. There were so many people packed in one room but the athletic ability in that room was very intimidating. It's like the best of the best. You can't judge each other's sports, but it's like you're holding your own sport, but it was cool," she said.

Now the 20-year-old is trying to integrate new layers into her life beyond gymnastics. If you follow her on social media you've seen these photos -- Simone's first boyfriend, a fellow gymnast, Stacey Ervin.

"Is it nice to be able to have that part of your life now?"

"I think so," she said. "We would have never been able to date because we are so busy in the gym. So like for my year off I went on my first date, and stuff and I was just like this is what it's like? I mean it's cool. I was really nervous but I feel like people learn that at a younger age so I'm a little older. So I'm like, oh what do I do? But it is good."

The family, two brothers, sister Adria, who looks like Simone's twin, and parents Nellie and Ron have dinner together every Sunday in Spring. They're close but now...

"I don't know, the other day, I was telling them that I went to go look at an apartment and it really freaked my mom out," Simone said. "She accidentally sliced her thumb open pretty badly and we had to take her to urgent care."

"That's how mad I was about the whole thing, because I wasn't paying attention to what I was doing," her mom explained. "I need to put some prayers on that one because I know I need, I will have to let her go at some point. I will have to get used to that idea so I have to pray on that one."

Simone also has a portfolio of endorsement deals -- Nike, Beats, Mattress Firm, and she is a spokesperson for adoptive families like hers. Nellie and Ron are her biological grandparents who adopted her and Adria.

Training for the Olympics this time will bring new challenges, since Simone has so many new roles at this point in her life. But her mind is as flexible as her body, and she is open to whatever comes next.

"I want to learn," she said. "I want to like mess up, make mistakes and learn from them."

Simone says she wants to take some college classes in the future and eventually pursue a career in sports. She didn't say she wants to work in gymnastics, but instead perhaps for the NFL, NBA, or MLB in sports management.