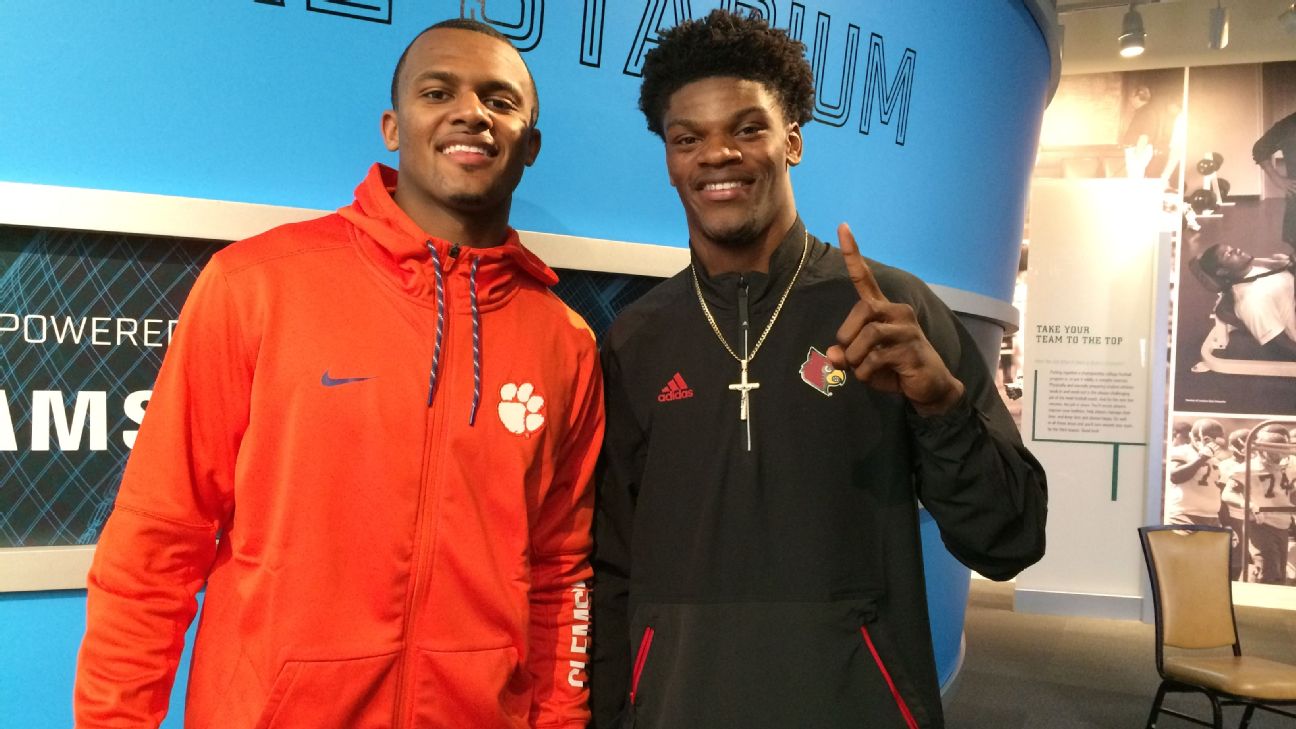 ESPN
By Jamison Hensley and Sarah Barshop
QuarterbacksLamar Jackson and Deshaun Watson headline Sunday's clash between the Baltimore Ravens and Houston Texans (1 p.m. ET, CBS), which will significantly impact the AFC playoff picture and the NFL Most Valuable Player race.

This, of course, isn't the first time we've been thrilled by a marquee duel between these two elite dual-threat quarterbacks.

On Oct. 1, 2016, Watson and the No. 5 Clemson Tigers rallied to beat Jackson and the No. 3 Louisville Cardinals, 42-36, in a game in which they combined for eight touchdowns and 854 yards of offense. In a season in which Clemson won the College Football Playoff National Championship and Jackson won the Heisman Trophy, the only meeting between Watson and Jackson not only showcased two of the top playmaking quarterbacks in college football but provided a glimpse of the NFL's future at that position.

"It was two titans going back and forth," said Hunter Renfrow, the Clemson wide receiver who now plays for the Oakland Raiders. "Lamar would have a huge run, and then here comes Deshaun charging back. It was literally two heavyweights exchanging blows."

ESPN recounts the memorable matchup through more than a dozen interviews with players and coaches who were there.

Clemson's Death Valley, which had hosted College GameDay that morning, was packed. The clamorous crowd set the tone by drawing Louisville into two false starts before its first clean snap. After the first penalty, Tigers defensive linemen Clelin Ferrell and Christian Wilkins got in Jackson's face.

"We started talking trash to him, telling him, 'Don't think we're scared of you,'" said Ferrell, who now plays for the Raiders. "We felt like every other team was scared just because of the talent he was."

After a scoreless first quarter, Watson threw touchdown passes of 33, 37 and 5 yards in the second quarter. Clemson took a commanding 28-10 halftime lead.

"It was a shootout. It was a very exciting game," Watson said. "We knew that we had to put up a lot of points when I was at Clemson."

Jackson then got his turn to show off. Louisville scored on five consecutive possessions, totaling 26 unanswered points. Jackson's 11-yard touchdown run, which included a stiff-arm along the way, put the Cardinals ahead, 36-28, with 7 minutes, 52 seconds left in the game.

"He just took it over for Louisville," Clemson coach Dabo Swinney said. "He wore us down with his legs and his arm and got them back in it. You never felt comfortable going against him."

Said Clemson defensive coordinator Brent Venables: "When [Jackson] gets in a groove, he's hard to stop. I wouldn't call him a streaky player because that's not the right word, but when he's in his comfort zone, he's really hard to stop. We tried to give him different looks, show him one thing and do another, and many times that wasn't a good idea either."

Watson made uncharacteristic errors, throwing a career-high three interceptions and fumbling once. He bounced back when it mattered most. With two touchdown passes in the fourth quarter, Watson put Clemson back ahead, 42-36, with 3:14 remaining. The deciding score was a 31-yard touchdown pass from Watson to tight end Jordan Leggett.

Said Swinney: "That's all you need to know about Deshaun -- he can throw three picks and he can come back and beat you. That's the mental toughness that he has. When we had to have it, he got it done."

Jackson nearly got it done for Louisville, leading the Cardinals to the Clemson 9-yard line. But receiver James Quick was knocked out of bounds, one yard short of the first down on Louisville's final play of the game.

Asked if he thinks about that yard, Jackson said, "Man, it is what it is. It happened. We have to move on from that. I can't dwell on it. It is what it is."

Jackson totaled 457 yards of offense (including 162 yards rushing) and three touchdowns. Watson threw for 306 yards and five touchdowns in addition to rushing for 91 yards.

"Lamar is amazing. Just seeing Deshaun and him go at each other, it was a game you had to stand up and watch [from the sideline]," said Giants running back Wayne Gallman, who played for Clemson.

Despite their college success, Watson and Jackson faced their share of doubters in the NFL. There was uncertainty about accuracy and the ability to develop into pocket passers.

In the 2017 draft, Watson was selected at No. 12 and was the third quarterback taken. The next year, Jackson was the last pick in the first round and the fifth quarterback chosen.

Now, Jackson and Watson are among the elite players in the NFL. Jackson is tied with Russell Wilson for the best odds to win NFL MVP, according to Caesars Sportsbook. Watson is in a three-way tie for third with Christian McCaffrey and Aaron Rodgers.

"These guys are winners. They were winners in college. They were winners in high school, and they're winners now," Texans coach Bill O'Brien said. "And I think that, relative to what their skill sets are, I feel like both coaching staffs do a good job of putting people in the right place around them and doing everything they can to emphasize, accentuate their skill sets. I don't know about the future and all those things. I think it's all about leadership. It's about instincts. It's about ability. It's about intelligence."

Watson has produced a combined 75 touchdowns (passing and rushing), which is the second most in NFL history through 32 career games. The only player with more is Dan Marino (78).

Jackson has run for 1,258 yards, more than what Emmitt Smith, LaDainian Tomlinson and Thurman Thomas had in their first 16 career starts. That's also 419 more yards than any other quarterback in NFL history through 16 career starts.

"Both coaches are putting them in positions to be successful and really embracing their talent and not trying to fit them in a box," Swinney said.

In his first nine games, Watson reached career highs in passer rating (107.1), completion percentage (70.2%) and passing yards per game (270.2). In Week 5, he became the first player ever to pass for at least 400 yards and five touchdowns with five or fewer incompletions in a single game.

"[There is] no greater challenge than Deshaun Watson," Ravens coach John Harbaugh said. "[He is] right at the top. He's throwing the ball extremely well. He has tremendous poise in the pocket. He's seeing the field, and he's really hard to get down. ..."

Jackson is the only player in NFL history to record at least 2,000 yards passing and 700 yards rushing through the first nine games of a season. He became the second player ever to post a perfect passer rating in multiple games, joining Ben Roethlisberger.

"He's killing it," Watson said of Jackson. "He's proving everyone wrong, and I know he's the type of guy that don't even listen to naysayers. He just does what he does, he has fun. He does it his way. He has a lot of talent, a lot of skill, a lot of playmakers run. He's definitely got a fan in me; he's known that since we've been playing against each other at Clemson and Louisville. He's definitely a guy that, if I'm not playing on Sundays, I'd definitely be watching him and support."

When Watson and Jackson meet again Sunday, they bring along two benchmarks for dual-threat quarterbacks. They are the first two players in NFL history with at least 15 passing touchdowns, five rushing touchdowns and a passer rating of 100 or higher through their team's first nine games of a season.

"That's going to be like old times, for real," said Packers cornerback Jaire Alexander, who played at Louisville. "Two really good, athletic, competitive quarterbacks going after it. I can't wait to see that one, actually." 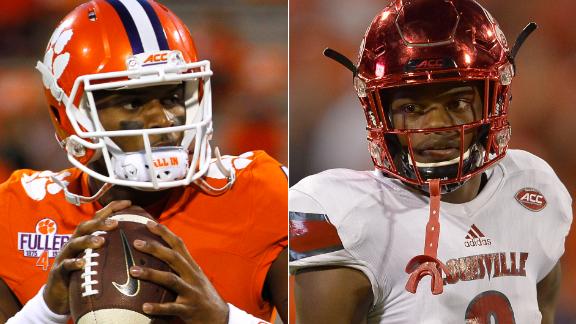 Flashback: Watson fuels Clemson vs. Lamar Jackson's Louisville
Take a look back at the 2016 top-5 showdown between Clemson and Louisville with future NFL stars Deshaun Watson and Lamar Jackson facing off at QB. 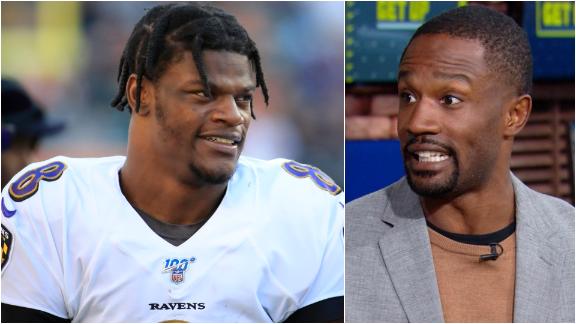