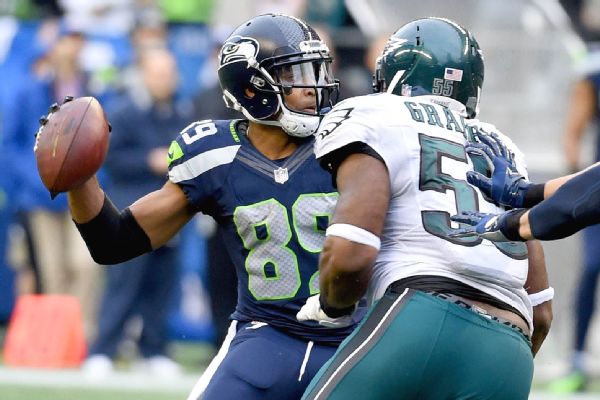 Burfict stuck both of his middle fingers up toward the stands late in the fourth quarter of the Bengals' 16-12 home loss to the Bills.

The fine is Burfict's second of the season. He was fined $75,000 for allegedly stomping on the leg of Patriots running back LeGarrette Blount.

Burfict also was suspended three games without pay to start the season for violating the NFL's safety policy.

Baldwin was fined after he was seen giving Seahawks offensive coordinator Darrell Bevell the middle finger during a win over the Philadelphia Eagles.

In the third quarter, Baldwin threw a 15-yard touchdown pass to Russell Wilson on a trick play. Before the play, coming out of the huddle, Baldwin flipped Bevell off because, he said, he likes to catch touchdowns in the red zone, not throw them.

"We joked about it," Baldwin said. "I'm sure you guys know now we've been begging for that play for a couple weeks now, trying to get that done. However, I didn't want it in the red zone. I wanted the target in the red zone.

"Typically when we get in the red zone, all the receivers, all the tight ends, we're kind of lobbying for the opportunity to get a pass in the end zone so we can score some touchdowns. It's very seldom that you hear a quarterback lobbying for a pass to himself, which Russell [Wilson] didn't. But it's just the fact that we don't want to literally be throwing away our targets in the red zone."

Bevell had a laugh about Baldwin's gesture on Wednesday.

"Doug and I have a great relationship, first and foremost," Bevell said. "I think Doug in his excitement, when he heard the play called in the huddle and knowing that he was going to get an opportunity to make Seahawk history, he was really excited, and he wanted to tell Bev that he was No. 1. And he just messed up a little bit there. If I could inspire him to make that perfect pass, then I'll go ahead and take it."
Related topics:
sportsespncincinnati bengalsdoug baldwinunsportsmanlike conductfinemiddle fingercrowdnflvontaze burfictseattle seahawksflipping offfans
Copyright © 2022 ESPN Internet Ventures. All rights reserved.
TOP STORIES
Houston gets extra 'rose' after paying $240k to bring Bachelor to town
Driver in Highway 249 road rage incident speaks out
Something strange is happening with our universe: NASA
Rain chances continue into the work week
Texas woman sought in fatal shooting of pro cyclist: US Marshals
Man's body found 6 miles from separate shooting call in NW Houston
Deputy hit while working accident during Jeep weekend, sheriff says
Show More
Alcohol and storms contributed to deadly crash in Asiatown, HPD says
At least 12 displaced after SW Houston apartment fire, HFD says
78,000 pounds of infant formula arrives in US
Man shot on apartment balcony; same apartment shot up earlier: HPD
Houston launches guaranteed income pilot program
More TOP STORIES News