USC AD Pat Haden: 'The decision I made didn't work out, and I own that' 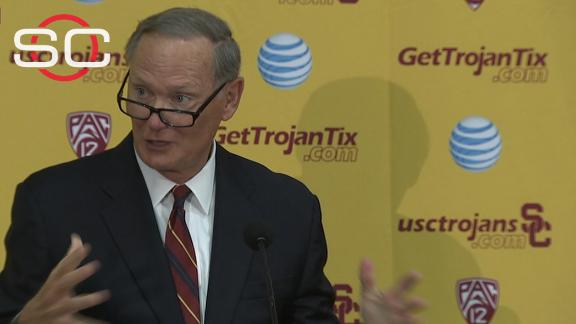 USCathletic director Pat Haden spoke Tuesday about the decision to fire head coach Steve Sarkisian and called it "very difficult" while also defending his handling of the situation.

Haden said he learned Sunday that Sarkisian was not at practice and, after looking into the matter, "determined that [Sarkisian] was not healthy." He announced Sarkisian would be placed on an indefinite leave of absence. He said he looked into the situation further over the next 24 hours and, after determining Sarkisian "did not meet USC's standards," decided to fire him.

Haden declined to go into specifics about Sarkisian's contract but said Sarkisian knew the expectations "and failed to meet them."

A school source told ESPN's Shelley Smith that Haden had instituted what was, in effect, a zero-tolerance policy concerning alcohol use with Sarkisian. When Sarkisian showed up to meetings Sunday seemingly intoxicated, that was a violation of the agreement, and it resulted in Sarkisian's dismissal.

An employee can't be fired for being sick or having an illness, the source said, but the guidelines Haden set up for Sarkisian made it clear a similar incident could not happen again, thus making Sarkisian's behavior a fireable offense.

A source close to the school later confirmed to ESPN that USC had fired Sarkisian for cause, meaning the school believes it does not have to pay him the remaining three-plus years of his contract.

Sarkisian also appeared to be under the influence at a team function in August. He apologized and attributed the incident to a bad mixture of medication and alcohol. He also added at the time that he would be getting unspecified treatment. Because of HIPAA rules, the school cannot talk about the nature of Sarkisian's illness.

Haden said Tuesday that he has not spoken to Sarkisian since Sunday. He said he spent a couple hours trying to reach Sarkisian to inform him of his termination but was unable to do so.

Sarkisian didn't answer Haden's calls because he was on a plane, headed to an out-of-state treatment facility, a source told ESPN's Joe Schad. Sarkisian learned he had been fired when he read an e-mail and text messages from friends expressing sympathy, the source said.

Sarkisian is expected to spend at least 30 days at the facility and is committed to addressing his problems, a source told Schad.

Haden, who once fired Lane Kiffin at an airport, has in recent days been the subject of criticism for his vetting of Sarkisian as a head-coaching candidate and also for his handling of Sarkisian's behavior at the August event. On Tuesday, Haden defended the decision to hire Sarkisian, citing background checks conducted by the university and NCAA and interviews with "dozens" of people including head coaches, staff members and longtime friends of Sarkisian.

"Have we gotten everything right?" Haden said. "Clearly not. ... This happens. And I said I own it."

Haden said he made the decision in August to not suspend or fire Sarkisian, based on input from medical professionals that Sarkisian could continue coaching and what was "in the best interests" of the players.

"I felt a great deal of compassion for Steve Sarkisian," Haden said. "He deserved another chance. And that's what I gave him."

USC president C. L. Max Nikias released a statement shortly before Haden's news conference expressing his support for Haden and calling him "a man of true character and integrity."

"Pat Haden has been doing an outstanding job in leading Trojan Athletics in the past five years, and I want to take this opportunity to reiterate my unwavering support for him," Nikias said in the statement. "I look forward to working with Pat Haden as our USC AD for many years to come."

Offensive coordinator Clay Helton will serve as the interim head coach. His only previous head-coaching experience was in the Trojans' win against Fresno State in the 2013 Las Vegas Bowl.

Helton will continue to call plays on offense, a role he took over from Sarkisian prior to this season. However, he will give up his role as the team's quarterbacks coach in favor of Marques Tuiasosopo, who previously served as the Trojans' tight ends coach and was Washington's interim head coach for its bowl game in 2013, following Sarkisian's departure for USC.

Haden would not detail a timeline or plan for hiring the next head coach, but Helton, who was hired by Kiffin prior to the 2010 season, after 10 seasons on staff at Memphis, made it clear he wants the job.

"I want to be the head coach," he said. "Know that up front and honest, but I also know the reality of the situation. In college football, at this level, you have to prove yourself. That's reality. You go out and win games, and then you talk about it."

Helton later took to Twitter to address the the Trojan Family:

USC (3-2) will play at No. 14 Notre Dame (5-1) on Saturday. Helton will be the team's fourth different head coach in its past four games against Notre Dame.

Information from ESPN's Kyle Bonagura was used in this report. 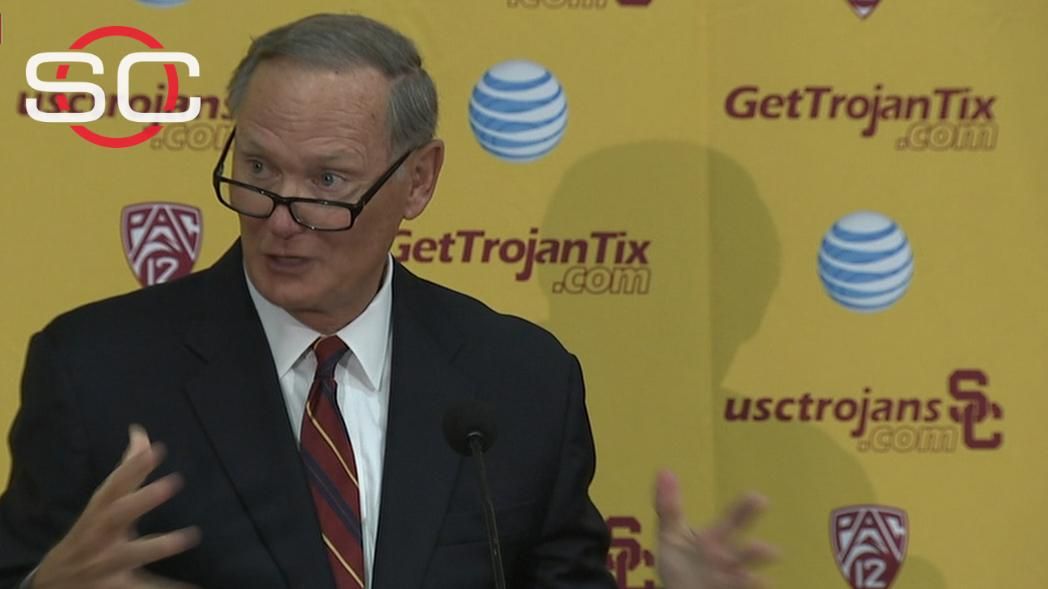