Tomlin: Offense could lead NFL in '15 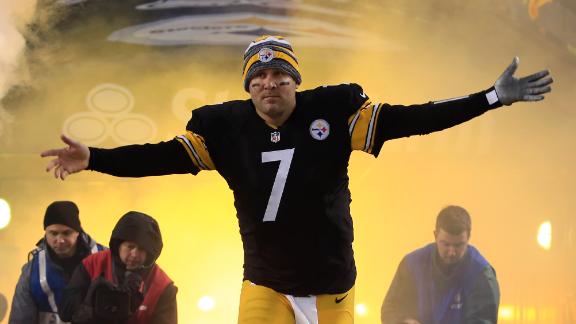 PHOENIX -- The Pittsburgh Steelers finished second in the NFL in total offense last season and seventh in scoring and coach Mike Tomlin said he expects the unit to do even better in 2015.

Indeed it is after the Steelers averaged 411.1 yards and 27.3 points per game last season on the way to their first AFC North title since 2010. The Steelers return every starter on offense and have arguably the NFL's best quarterback-running back-wide receiver trio in Ben Roethlisberger, Le'Veon Bell and Antonio Brown.

Bell, who finished second in the NFL with 1,361 rushing yards last season, is expected to miss the first two games of 2015 for violating the NFL's personal conduct policy.

But running back DeAngelo Williams is the one outside free agent that the Steelers have signed. And Tomlin said Williams, the Carolina Panthers' all-time leading rusher, still has plenty of burst even though his 32nd birthday is approaching.

"Obviously the acquisition of DeAngelo Williams helps us in that regard," Tomlin said of the expected loss of Bell for the start of the 2015 season, "but it goes beyond that. We needed fortified depth at the running back position and he definitely fits the bill."

One trap the Steelers have to avoid falling into is assuming the offense will get better just because they are loaded at the skill positions and have an experienced but relatively young offensive line.

"You think we had a good season it's going to happen every year. That's not the case," left guard Ramon Foster said after the 2014 season. "It's going to be the leaders that have to let (younger players) understand that they can't get complacent. We have to work to get better."

"I've just got a great deal of respect for the process and building it," Tomlin said Tuesday at the media breakfast for AFC coaches, "so I look forward to each day and each and every opportunity to enhance what we are."