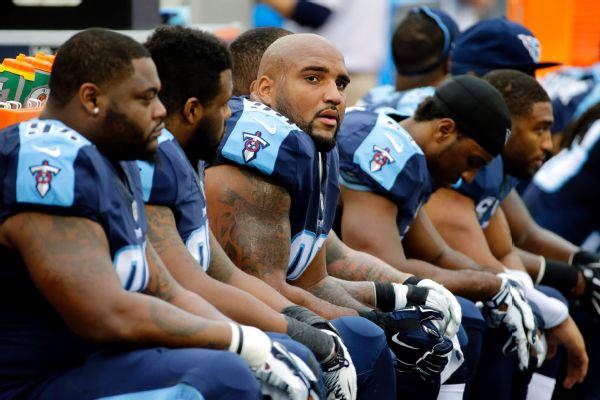 NASHVILLE, Tenn. -- The Tennessee Titans were unusually healthy all season, but the injuries hit them hard Sunday against the Houston Texans. The most notable loss was defensive end DaQuan Jones, a three-year starter, who suffered a torn biceps and was placed on injured reserve Monday.

It's a big loss for the Titans. Jones, who will have surgery soon, was hidden because of the dirty work he did taking double teams and stopping the run. He made a big splash notching 3 sacks over the last two games.

The Titans have the NFL's third best rushing defense, in part due to Jones' play up front. They'll lean on 2016 second-round pick Austin Johnson and veteran David King to step up for Jones.

It's a particularly tough turn for Jones, who was hoping to finish the season strong and impress during his contract year. He's scheduled to be an unrestricted free agent after the season. The Titans signed blocking tight end Luke Stocker to a two-year deal to fill his roster spot.

The 8-4 Titans are tied for first place in the AFC South, and are in strong position to make the playoffs for the first time since 2008. As always, staying healthy will play a huge role in how they finish the season.

Cornerback Logan Ryan is in the concussion protocol. Tight end Delanie Walker aggravated a right ankle sprain he's dealt with over the last month. It may cause him to miss some practice, but he's not in serious danger of missing Sunday's game yet. Derrick Morgan (knee sprain) and Sylvester Williams (sprained ankle) make it five Titans starters coming out of Sunday's game with injuries and both are day to day.