There's no stopping the Rockets' superstar duo in clutch time 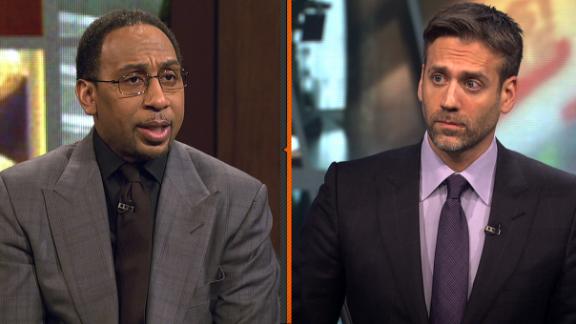 Early skeptics of the Houston Rockets' superstar guard pairing frequently pointed to crunch time, predicting that James Harden and Chris Paul would have problems figuring out how to share the ball with the game on the line.

The basketball world had to wait almost two months to get its first glimpse of the clutch dynamic with the Rockets' ball-dominant duo due to a knee injury that sidelined Paul and Houston's dominance upon his return. It finally happened on Dec. 9, when the Rockets trailed the Portland Trail Blazers by three points with five minutes remaining.

Well, let's just say the skeptics were proved wrong that night in Portland, and ever since.

"It was layup, layup, layup, 3-ball," Harden said after the Rockets finished off the 124-117 win by ripping off 21 points in the final five minutes, all scored or assisted by Paul or Harden. Houston was 7-of-7 from the floor in that closing stretch, a turnover by Paul and a missed free throw by Harden the only imperfections on a clutch offensive clinic.

It was a sign of things to come. The Rockets, owners of the NBA's best record at 49-13, rarely face such tests but have established themselves as the league's premier closers. Houston entered the week with the NBA's best clutch point differential (plus-48) despite playing the fewest clutch minutes (82), as defined by the score being within five points in the final five minutes of the game.

Dominant teams rarely rack up clutch minutes during the regular season -- for example, the 2016-17 champion Golden State Warriors played just 100 clutch minutes -- but success with the game at stake bodes well for the Rockets, who have yet to test their new guard combo under playoff pressure.

But Harden and Paul haven't just hushed any doubt about whether they can coexist in crunch time; they've been great as a clutch duo.

Rockets 108, opponents 59 is the cumulative score in just 31 clutch minutes that Harden and Paul have played together, according to ESPN Stats & Information. The Rockets' offensive efficiency in that time: 161.7 points per 100 possessions.

Those remarkable numbers make Harden and Paul the most prolific closing 1-2 punch of the more than 5,700 duos who have played at least 30 clutch minutes together since the start of the 2007-08 season, as far back as ESPN Stats & Information's access to on-court/off-court data reaches.

The secret of the Rockets' clutch success isn't complicated. Houston is by far the NBA's best isolation team, a style that tends to be emphasized more as the pace slows in crunch time (the Rockets actually haveranked last in overall pace since beginning the winning streak on Jan. 28).

They have the luxury of spacing the floor and deciding (or setting a pick and getting a switch to dictate) which of their Hall of Fame playmakers has the more favorable individual matchup to exploit.

"We somewhat simplify it," Paul told ESPN after the Rockets finished with a 16-7 run in Saturday night's 120-118 win over the Boston Celtics. "We know where different guys like the ball, and most of the time it's me or James doing the same thing we've been doing the rest of the game. We make the right play. If a guy helps, we kick it to the corner or wherever it may be.

"But we play the way that we play."

Harden and Paul have had a hand in 28 of the Rockets' 32 field goals during those 31 clutch minutes together. The co-stars have scored 20 buckets in that span, 16 of which were unassisted, the other four coming on feeds from each other.

Harden, the NBA's scoring leader and MVP front-runner, remains the Rockets' clear first option in crunch time. His clutch stats when paired with Paul: 42 points on 13-of-23 shooting with five assists and zero turnovers.

Paul has thrived as a ruthlessly efficient clutch sidekick with the Rockets after bearing the responsibility of having to create on almost every crunch-time possession with the New Orleans Hornets and LA Clippers. His clutch stats when paired with Harden: 30 points on 7-of-8 shooting with seven assists and two turnovers.

So much for the theory that it would take time for two ball-dominant stars to work out kinks in crunch time.

"A lot of times it takes two, three years of learning how to close teams out best and all that," Rockets coach Mike D'Antoni said. "But these players, they want to get it done now.

The Rockets are 34-3 when Harden and Paul have both played this season, and only 10 of those games have qualified for the clutch designation. Of those 10 games, the Rockets have been outscored only once in clutch time with Harden and Paul on the floor together, and that exception could come with an asterisk.

The exception occurred on Dec. 31, when the Los Angeles Lakers outscored the Rockets by one point in moments that fit the clutch definition before Harden left in the final minute of regulation due to a strained hamstring. Paul fed Gerald Green for a game-tying 3-pointer the next possession, then scored 15 points and collected three assists in the extra periods as the Rockets pulled out a double-overtime win.

Harden's relative struggles in the clutch for the 55-win Rockets last season may have cost him the MVP. Houston was minus-27 in Harden's 134 clutch minutes, as he scored 150 points but shot only 35.5 percent from the floor and had as many turnovers (20) as assists. (By comparison, Oklahoma City's Russell Westbrook, the MVP winner who will face the Rockets on Tuesday night, led the league with 247 clutch points and was plus-85 in 148 minutes.)

Harden has had similar clutch struggles this season when Paul hasn't played. He's minus-14 in those 37 minutes, scoring 26 points on 30.3 percent shooting from the floor with seven assists and five turnovers. The Rockets got revenge on Saturday night for Harden's most memorable clutch shortcoming, which occurred when Boston's Marcus Smart baited him into two offensive fouls in the final seven seconds as the Celtics finished off a 26-point comeback in a Dec. 28 game Paul missed due to injury.

The Rockets certainly remembered that game when they saw the Celtics again Saturday night. As a veteran team with championship aspirations, the Rockets treasure their rare opportunities to perform under late-game pressure, well aware that they must succeed in those situations to make a deep playoff run.

"We always talk about that when we get those challenges," forward PJ Tucker said. "Like, 'Yo, we've never been in this situation. Let's try to get better in it right now and get better for the postseason.' Because we don't have a whole lot of games that are like that.

"Our focus level in those situations is insane. We learn from our mistakes. Last time in Boston, you remember that crazy play that happened, those couple of plays? We were not going to let that happen again."

It helps to have role players such as Tucker, Trevor Ariza and Luc Mbah a Moute, a trio of veterans whose defensive versatility enables the Rockets to play their preferred switch-everything style down the stretch of close games. D'Antoni always has Tucker or Ariza, and often both, on the floor in crunch time, and Mbah a Moute is a valuable weapon for situational defensive substitutions.

As historically explosive as Houston has been offensively, Ariza points to defensive communication as the key to the Rockets' clutch dominance. With Paul on the floor, the Rockets have a downright stingy clutch defensive rating of 97.8 points per 100 possessions.

"Obviously, Chris is a talker," Ariza said. "He likes to talk and likes to communicate. It starts there, and it trickles down to everybody. You hear [center Clint Capela] in the back screaming which way to send a guy. That's huge for us. We need that."

It was Tucker and Ariza who made the most important plays late in Saturday's win over the Celtics. Tucker stripped Boston's Terry Rozier after a rebound, allowing Paul to hit Ariza for a game-tying 3 with 1:33 remaining. On the next possession, Ariza stripped Kyrie Irving and gave the Rockets the lead for good by converting the turnover into a breakaway layup, a rare example of a Houston clutch bucket in which one of their co-stars didn't have a hand.

A Rockets team that routinely wins in blowout fashion was almost giddy to have to grind out a victory, the kind of game they expect to come in May and hopefully June.

"We've got guys that know how to play in all those situations," said Paul, who is plus-62 in 45 clutch minutes this season. "We're scrappy, man. We just compete. It's a fun way to play." 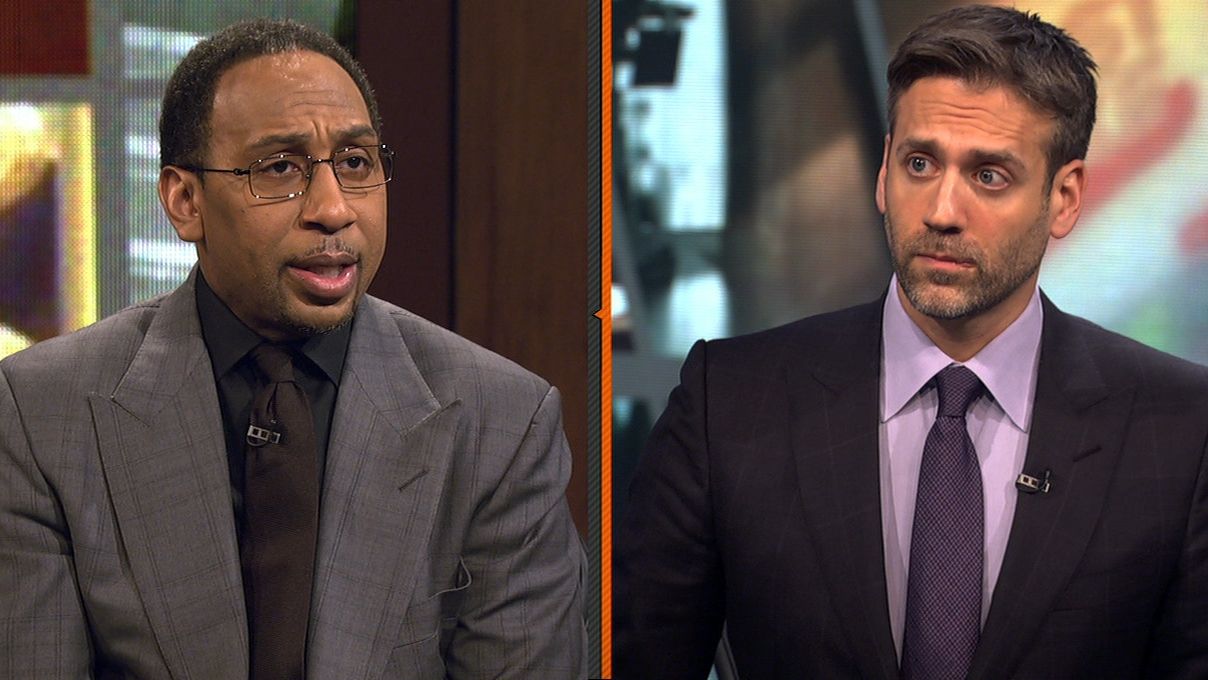 NBA fans desperate for Rockets to knock off Warriors?
Stephen A. Smith tempers Max Kellerman's confidence in Houston's ability to take down the defending champions in the Western Conference finals.