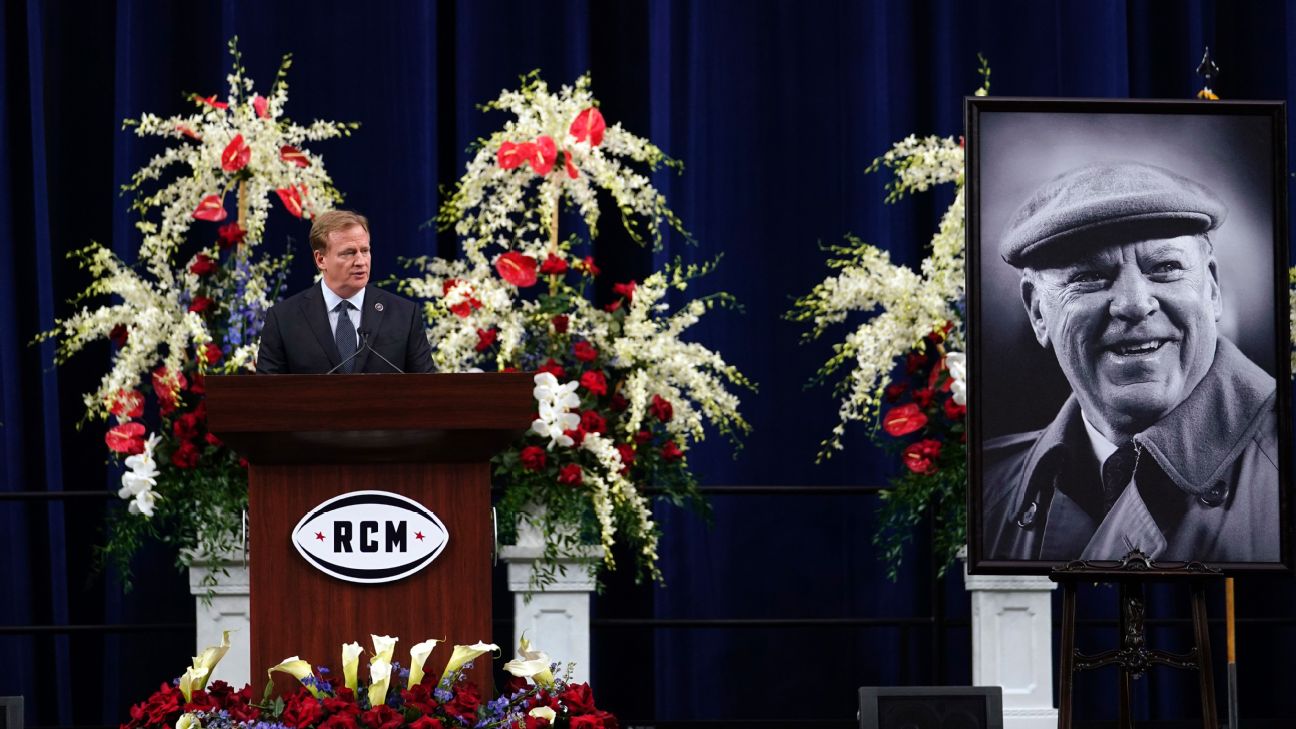 "It's ironic that I'm getting emotional because the only other time I ever teared up was right on this field when the Texans and Bob kicked our butt in the first game that was ever played in this stadium," Jones said, recalling Houston's 19-10 victory over the Cowboys in the franchise's inaugural game in 2002. "The Texans put it on the Cowboys and it was a glorious night to begin the Texans. Bob was so special."

More than 1,000 of McNair's friends, members of the Houston and NFL communities and players and coaches past and present gathered to pay respects and say goodbye to McNair, who brought the NFL back to Houston for the 2002 season after the Oilers moved to Tennessee.

Former Secretary of State James A. Baker, a close friend of McNair's, opened up tributes by saying the gathering was in the "House that Bob Built." Baker said he and McNair enjoyed a love of politics, football and quail hunting, and said it was former President George H.W. Bush who converted both of them from Democrats to Republicans.

Baker talked about McNair's determination and told a story of how he saw McNair give up on a quest only once in his life, when the two were quail hunting in sweltering South Texas heat. After a long and miserable day, McNair finally said in his Southern drawl, "calf rope," an expression similar to "uncle" or "I give up."

The Rev. Eric Manning provided a welcome and an opening invocation. Manning is the senior pastor at Mother Emanuel A.M.E. Church in Charleston, South Carolina, the site of a June 2015 race-inspired mass shooting.

NFL commissioner Roger Goodell also spoke, calling McNair one of America's finest sportsmen and business leaders. Goodell talked about that expansion process and how Houston was a long shot early on, but McNair never wavered.

"Bob was not in it for himself. He wanted to return the NFL to Houston because of his tremendous loyalty to the community," Goodell said. "He knew that bringing the NFL back would help show the world what an extraordinary place Houston is."

"Not to put any more pressure on you and the team, but you know how much Bob wanted to win a Super Bowl," Goodell said, looking to Texans coach Bill O'Brien.

Texans defensive end J.J. Watt praised McNair for his philanthropy and generosity in the community. Watt recalled a charity event at NRG Stadium when, at the end of the event after "tons of money" had been raised, it was announced that McNair committed to matching everyone's combined donations.

"That's what Mr. McNair did. He would do the kindest things at random moments, and he would do it many times when people had no idea that he was doing it," Watt said. "I consider myself lucky to have known him, lucky to have learned from him, and I can only hope that I'm making him proud in the way that we represent his organization."

Dr. Harris Pastides, president of the University of South Carolina, mentioned a commencement speech McNair gave at his alma mater in 1999 and how McNair talked about meeting his wife, Janice, and telling her parents they were moving to Texas for a few years to build some capital before returning home.

"He then reminded the graduates to never make promises they could not keep," Pastides said.

Dr. Dave Peterson, pastor emeritus at Memorial Drive Presbyterian Church, talked about McNair's drive, which he said he believed was instilled in McNair from an early age. Peterson told a story of a young McNair in his small hometown of Forest City, North Carolina, who wanted his country dirt road to be paved so badly that he would repeatedly stomp on a strip provided by the state's transportation department to determine how busy the road was and whether or not it needed to be paved.

Peterson said he visited McNair at the hospital on Thanksgiving and said he was saddened to see him suffering. Peterson noted that the final few months of McNair's life were painful, adding that in seeing the pictures and videos paying tribute to McNair, "It's good to see him smiling again."

McNair died Nov. 23 at age 81. He had battled both leukemia and squamous cell carcinoma in recent years. He died peacefully with wife Janice and his family by his side, the Texans said.

Following the tributes, a short video montage highlighted McNair's life, with a focus on his time as Texans owner.

"I'd like to think that I'll be remembered as an honorable man, as a good Christian man, and that I always did things in a first-class manner and treated people honestly," McNair said on the video. "I think that would be a good legacy."
Report a correction or typo
Related topics:
sportsespnroger goodelljj wattbob mcnairhouston texansnfljerry jonesnrg stadiummemorial service
Copyright © 2021 ESPN Internet Ventures. All rights reserved.
TOP STORIES
Money in Lakewood Church wall may be tied to 2014 theft, HPD says
US Marshals put up $10K to find parents charged in MI school shooting
Fatal West Loop crash prompts traffic backup at 18th Street exit
Pasadena PD searching for suspect who stole Boy Scout trailer
Family of Navy vet shot to death on N. Fwy searching for answers
Watch 'ShopLocalish: Holiday Deals and Steals' with Tory Johnson
First, it was catalytic converters, but thieves moving to this part
Show More
Record highs possible Saturday, and Sunday will be steamy too
UH could turn national title picture upside-down if it beats Cincy
Mark Cuban buys entire Texas town, but what will he do with it?
How new TX law could impact topics educators can discuss in classroom
Omicron variant discovered in at least 7 US states
More TOP STORIES News