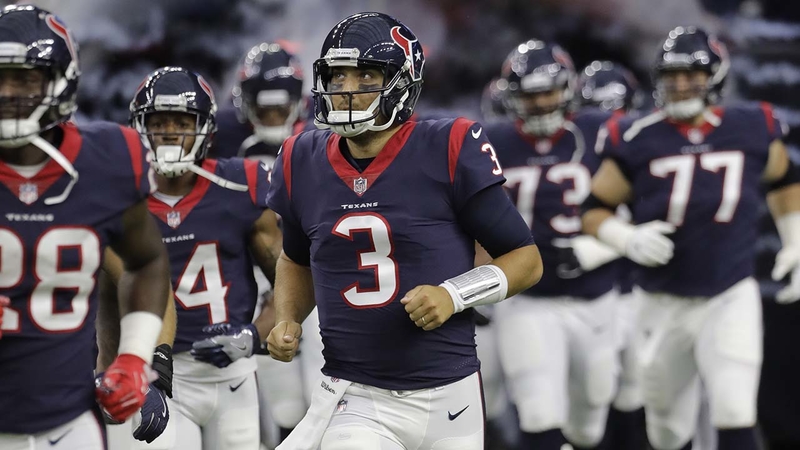 The Houston Texans and Houston Astros are among the teams pondering their options as Hurricane Harvey reached Texas' Gulf Coast. The dangerous Category 4 storm made landfall late Friday.

Cowboys executive vice president Stephen Jones said there have been conversations about moving that game from Houston's NRG Stadium to AT&T Stadium in Arlington, if necessary.

"Let's see what happens," Texans coach Bill O'Brien told reporters Thursday about the Texans' plans to return home after Saturday's game. "Certainly if something does happen to that effect, we'll have to address it with our players. Family comes first. It's never football over family. It's football over a lot of things, but not family."

"Right now, we're in a holding pattern," Rangers traveling secretary Josh Shelton told the Fort Worth Star-Telegram of the team's plans to travel from Oakland to Houston on Sunday. "We'll know more once it makes landfall."

Harvey is expected to stall and let loose with lots of rain -- upward of 35 inches in some areas -- and then will likely go back into the Gulf of Mexico as a tropical storm, gain strength and hit Houston next week.

Hurricane Harvey has already forced the cancellation of some sporting events.

The Houston Dynamo called off Saturday's MLS game against Sporting Kansas City and rescheduled it for Oct. 11. Likewise, the National Women's Soccer League's Houston Dash will not play Sunday's game against the North Carolina Courage.

The Double-A Corpus Christi Hooks canceled both games of Friday's doubleheader against the Midland RockHounds.

Sam Houston State, which is scheduled to open its college football season against Richmond on Sunday, said in a statement Thursday that it is continuing to monitor developments before making a decision about the game.

The LSU Tigers, who open their season against BYU in Houston at NRG Stadium on Sept. 2, said they will continue to actively monitor the situation as the storm unfolds.

"First and foremost, our thoughts and best wishes are with our neighbors in South Texas, and of course with our friends and family here in South Louisiana as Hurricane Harvey draws near," the university said in a statement. "We know all too well the challenges of facing a storm of this magnitude and stand ready to assist in any way we can."

In addition, the Houston Cougars have moved their football practices to Austin and will use the Texas Longhorns' indoor facility over the weekend. The Cougars are preparing to stay out of town until Tuesday, if necessary.