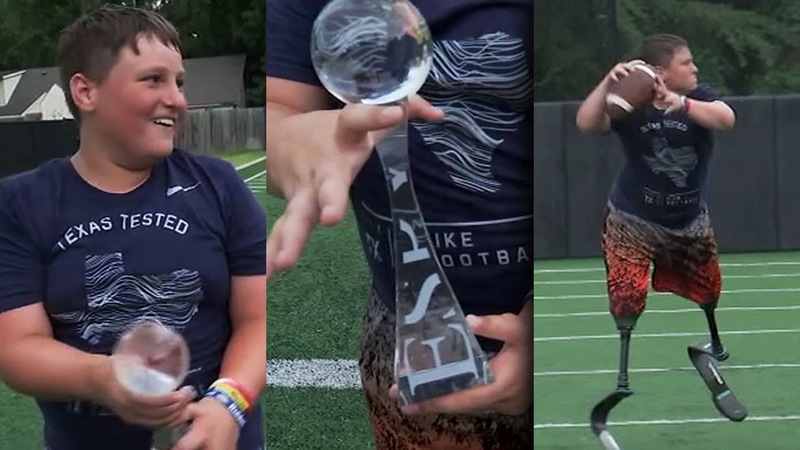 MAGNOLIA, Texas (KTRK) -- The ESPY Awards will air Wednesday at 7 p.m. on ABC13. Ahead of the ceremony, a double amputee quarterback from Magnolia received a huge honor.

Calder Hodge was named as a 2019 honorary ESPY Award winner. The 14-year-old was born without tibia bones and had his legs amputated as a toddler. He uses prosthetics to play football.

"Most people know his idea is to make it to the NFL and play quarterback," said J.P. Tillman, his quarterback coach at Blitz Football Camp in northwest Houston. "He would be the first person with prosthetics to do it. He's really good at what he does."

"This is awesome," said Hodge, while holding the award. "I didn't do anything to deserve an ESPY, but this is a God-given blessing."

The teen said he's never doubted his ability to play football and encourages others with disabilities to go for their dreams.

"If you put your mind to it and you really work hard, you can do it," said Calder. "And don't be scared to try. You can do anything you set your mind to."

"We won a national championship last year and he was the youngest one on the team," said Tillman. "It's interesting to see a kid that's so strong willed push himself daily."