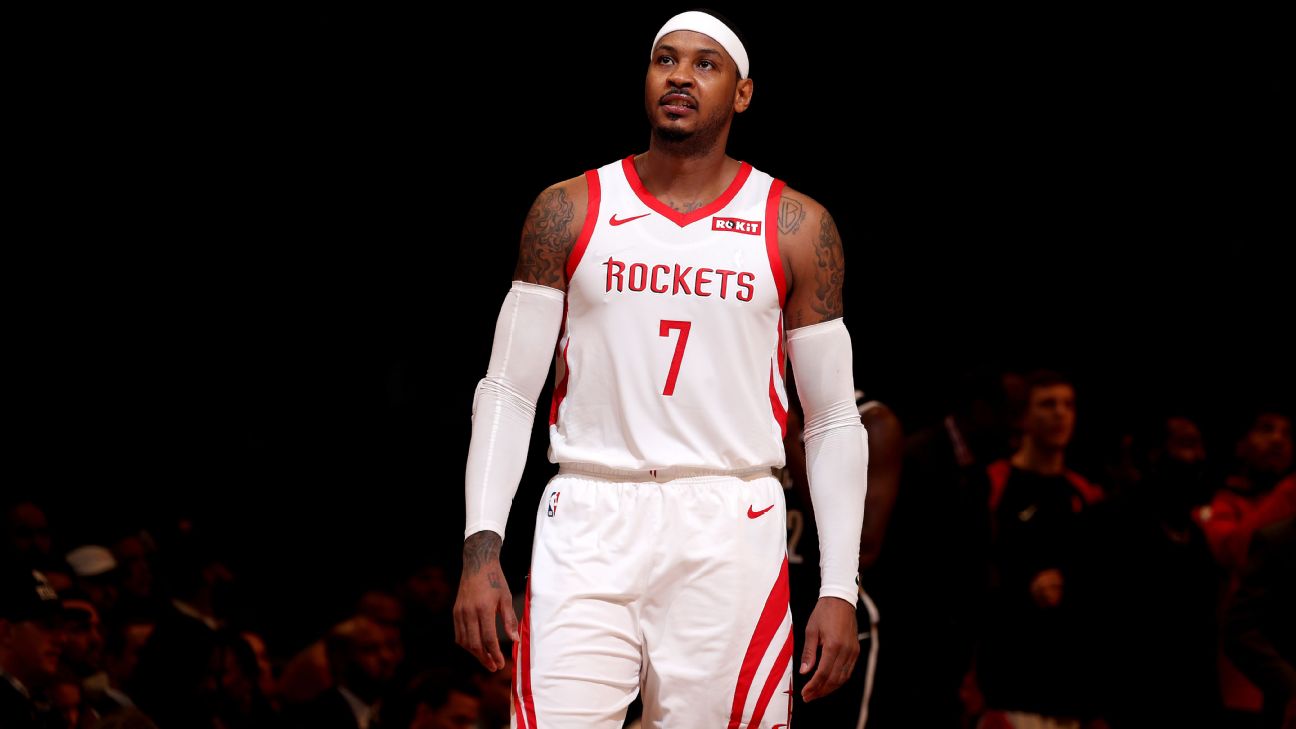 Barring a change of direction, the Rockets are moving toward waiving Anthony in the near future, league sources said.

Both Anthony and front-office officials around the league are privately expressing surprise at the speed with which Houston is short-circuiting this partnership, especially after the Rockets' courtship of Anthony this summer.

Anthony will remain away from the Rockets for his third straight game -- Tuesday night in Denver -- with what the organization is calling an illness.

Houston moved off Anthony only 10 games into a regular season in which both Anthony and the Rockets were still working to find footing. Houston coach Mike D'Antoni plans to move rookie Gary Clark into a more prominent role in the rotation, which would usurp Anthony's minutes.

Anthony, 34, has remained eager to play and try to contribute to the Rockets, sources said.

Anthony chose to be a supporting part of Houston's championship aspirations over opportunities to play a more prominent role elsewhere.

Houston's rapid pivot on a summer free-agent commitment to Anthony has left teams around the NBA searching for information and answers on how to proceed with his impending availability. The Rockets have struggled to start the season with a reshaped roster and are pushing hard for changes that they hope will get them back into Western Conference championship contention.

Anthony's performance in the opening 10 games mirrored that of the Rockets themselves: uneven. Anthony did deliver a dramatic 28 points in a crucial road victory at Brooklynon Nov. 2 and back-to-back 24- and 22-point performances in late October losses to the Clippers and Utah Jazz. As has been the case for years, Anthony struggled on defense, but essentially remained the player that Houston believed it was signing over the summer.

Assuming he's released, Anthony could have his veteran's minimum $2.4 million contract claimed on waivers, or he could clear waivers and become a free agent. Anthony could sign immediately with a new team, or wait and see what fit could develop in the marketplace.

Several general managers and their coaches tell ESPN that they have been discussing whether adding Anthony could be helpful to them, or if there is a way to make that work with current roster structures. Nevertheless, this is a difficult time of year to get teams to make roster moves. Anthony's best short-term course of action could be to exercise patience.

In both public and private, the Rockets found Anthony to be accepting of his role and responsibilities with the team.

After Oklahoma Citytraded Anthony to Atlantathis summer, the sides reached an agreement on a contract buyout. Anthony signed a one-year deal with the Rockets.