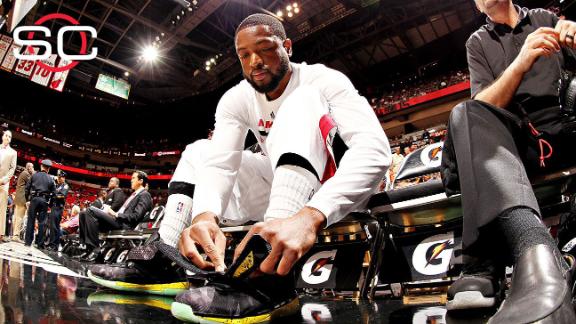 MIAMI -- For the first time, the relationship between Dwyane Wade and the Miami Heat seems murky at best.

And his future with the team is now in doubt.

Contract talks between Wade and the Heat are at an impasse and the three-time NBA champion is preparing himself for possibly leaving the team this summer, a source confirmed to ESPN.com.

Wade is under contract for the 2015-16 season, and would earn about $16.1 million. He also could opt out and become a free agent. Wade has said many times, including in an end-of-season interview with The Associated Press, that he wants to remain with the Heat for the remainder of his career.

But Wade has not decided anything, including whether he will opt out, the person said on Thursday.

"He's trying to figure out how things should transpire and if he can reach another agreement with the Heat," the person said.

Wade led the Heat in scoring this season at 21.5 points per game, but missed 20 contests because of injuries and illness. Last summer, he opted out of a deal that had two years and about $41 million remaining -- a move that had to be made in an effort to give the team enough financial flexibility to keep LeBron James in Miami.

James decided to leave anyway, and Wade wound up taking a massive pay cut. He signed a two-year deal, the second year -- next season -- being his option, at a total value of about $31 million. Meanwhile, the Heat gave Chris Bosh -- who also opted out last summer -- a five-year, $118 million deal based in large part because he had a massive contract offer from the Houston Rockets.

Wade wound up taking essentially what was left after other players, including Luol Deng, had struck deals.

The Heat will have some free-agent decisions and dealings to get through this summer, most notably trying to keep point guard Goran Dragic -- who Wade likes playing with -- in Miami. But Dragic will likely command somewhere close to a maximum deal, and that could mean that Wade would once again find his earnings limited if he were to opt-out and stay with Miami.

"We're in a very good position to offer him more than anybody else," Heat President Pat Riley said in April.

The question now becomes what can the Heat offer the 33-year-old Wade. It's also unclear what the open-market offers would be for Wade, who has spent the early part of this offseason slimming down -- he said he lost 12 pounds in the last month -- and working on off-the-court business dealings.

"We have a backcourt that we're thinking about that I'll feel very good about," Riley said in his end-of-season remarks of the potential of a full season of a Dragic-Wade backcourt.

Wade is Miami's all-time leader in games, points (by a huge margin), assists and steals. He's second in blocked shots and fourth on the team's all-time list in rebounds.

More talks between Wade and the Heat are scheduled. He doesn't have to make a decision on opting out until the end of June, although it's clear the Heat want to go into the free-agent process without knowing what will happen with their longtime cornerstone.

Information from The Associated Press and ESPN.com's Brian Windhorst was used in this report.