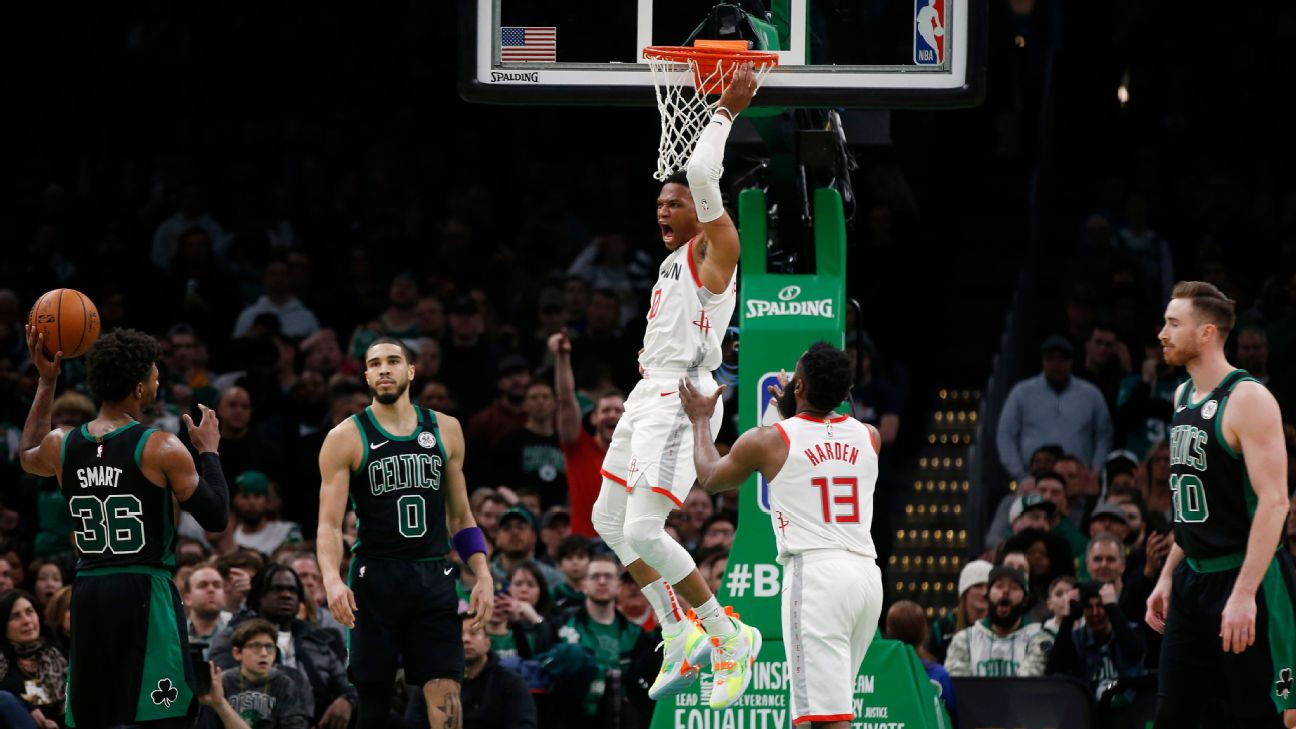 BOSTON -- Off nights for James Harden haven't often ended well for the Houston Rockets over the years.

That's why the Rockets pounced on the opportunity to pair Harden with another recent MVP, acquiring Russell Westbrook for Chris Paul and a package of draft picks last summer. That deal paid dividends for Houston on Saturday night, when Harden struggled but Westbrook starred in a 111-110 overtime victory over the Boston Celtics.

"We had a lot of attention on James Harden, and forgot about the other MVP over there," Celtics forward Jaylen Brown said. "[Westbrook] came out and asserted himself early and took over and dominated this game."

Westbrook scored a game-high 41 points on 16-of-27 shooting in the victory, putting an exclamation point on one of the most productive months of his 12-year NBA career. He averaged 33.4 points per game in February, the second most of any month in which he's played at least five games, behind only March 2017, when Westbrook was putting the finishing touches on his MVP campaign.

Westbrook has never scored with such consistent efficiency. He shot 54.9% from the floor in February, the best of any month in his career.

"Right now, I think I'm moving in the right direction," said Westbrook, who also had 8 rebounds, 5 assists and 3 steals in the win. "I've just got to stay locked in with what I'm doing, with my craft and what I've been doing since I've been in the league."

It's not as if this monster month for Westbrook came out of nowhere. He was almost as dominant in January, averaging 32.5 points on 52.2% shooting.

"He's been doing it," said Harden, who was held to 21 points on 7-of-24 shooting Saturday at TD Garden. "He's more confident than he's been, so he's able to go out there and make plays for himself and us. This is his first year as a Rocket, so it was going to take some time. But he's finally there."

The Rockets' reliance on playing small ball, removing a traditional center from their rotation, has brought out the best in Westbrook. Surrounded by perimeter shooting threats, Westbrook has relentlessly attacked defenses off the dribble.

Against the Celtics, only two of Westbrook's 27 field goal attempts were from 3-point range, a shot distribution that has become routine for him recently. He scored 11 times in the restricted area, with his other four buckets coming on pull-up midrange jumpers that are open because of the pressure he puts on defenses with his penetration.

"One thing he can do and one thing he's great at is driving to the rim," said Rockets reserve forward Jeff Green, who also played with Westbrook in Oklahoma City. "When you're spacing the floor and you're taking [defenders] out the middle, you're allowing him to access the lane whenever you want. You're playing right into his hands. Credit [coach Mike] D'Antoni and the front office for the way he's orchestrated it. It's maximizing what he's able to do."

A fully maximized Westbrook has provided Harden by far the most potent partner he's had during his eight-year Rockets tenure. Harden was the lone Rocket with any 40-plus-point games over the previous seven seasons. Westbrook has four such performances this season, all in wins. Two of those occurred in road victories over contenders in February, with Saturday's outing against the Celtics matching his 41-point night on 17-of-28 shooting in a Feb. 6 win over the Los Angeles Lakers.

"You know he was the MVP one year, right?" D'Antoni said, a joking reminder of Westbrook's résumé. "That's what he's been giving us." 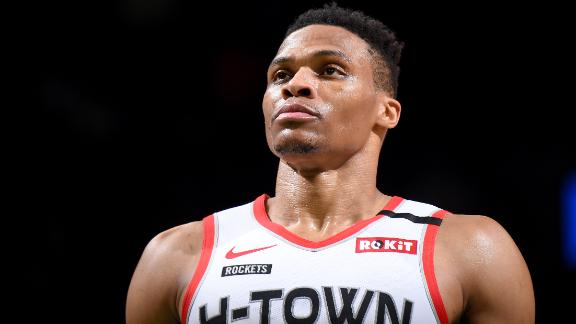