Role players give Astros pop through the lineup, championship edge 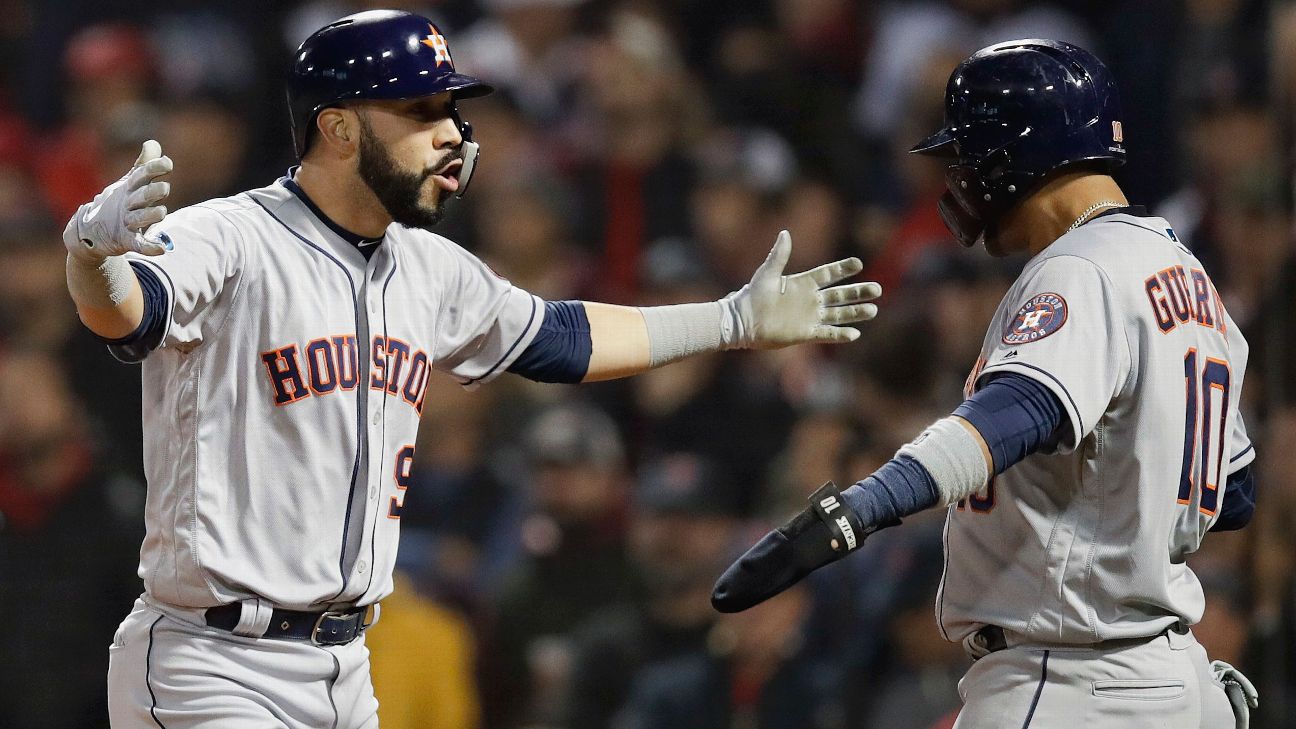 The dramatic turnaround of the Houston Astros franchise from historically bad -- they were the second team in MLB history to have three consecutive seasons of at least 106 losses -- to world champions in just five years has been fueled by the development of an All-Star lineup with marquee names such as George Springer, José Altuve, Alex Bregman and Carlos Correa.

However, while those players are game-changers, having star players alone doesn't guarantee winning it all -- just ask Bryce Harper and the Washington Nationals. The Astros' supporting cast has been critically important to their success. The likes of Marwin González, Yuli Gurriel, Jake Marisnick, Tyler White, Josh Reddick and Tony Kemp might not be household names, but they have been an integral part of the Astros' club-record 103-win season.

"In 2015, we had a good team, but once you got past our fifth spot in the lineup, it eased up quite a bit. That's why we ended up trading for Brian McCann and getting Yuli signed -- having dangerous batters in the six, seven, eight spots," said Jeff Luhnow, the Astros' president of baseball operations and general manager since 2011.

"And then having guys like Reddick, Kemp, [Evan] Gattis, González and even [Martín] Maldonado has been dangerous [to opponents]," Luhnow added. "There's a lot of guys down there that can do damage, and it does change the other manager's strategy of when to bring in certain relievers, because our lineup has no easy pockets."

The bottom part of the Astros lineup (sixth through ninth) was responsible for 81 of the team's 205 home runs, the second-best production in baseball, trailing only the record-setting New York Yankees (95). Those spots in the lineup also accounted for 292 RBIs, third best in the majors, making up 38 percent of their total runs driven in during the regular season (763).

Batters in those same lineup slots also scored 305 runs during the regular season, fourth best in MLB. Those 305 runs made up 38.3 percent of the 797 runs the Astros scored this season. The numbers are indicators of a lineup with strong top-to-bottom performance. And they haven't let up in the playoffs. González, Kemp, Maldonado, Reddick and White have combined for 20 hits this postseason.

"I think the opposing staff kind of gets locked in against those big-name guys, from Springer, Altuve and Bregman. I don't want to say they let off, but it seems like they breathe a big sigh of relief," said Reddick, the veteran outfielder who was a valuable platoon player all year. "That's when we really take advantage of these guys, from [Kemp] to myself to Marwin."

"That is the special thing about this team. We have a great offense where anyone can hurt you. We don't have an easy out. Anyone can hit a home run," said González, who has been the second-best hitter for the Astros this postseason (after Springer), going 8-for-19 (.421) with seven RBIs in five games. "There are power hitters from one through nine and that's what makes this team special, along with the starting pitching we have.

"Everybody can do damage. Every day it's a different hero."

González's two-run home run in the third inning of Game 2 of the AL Championship Series gave the Astros a 4-2 lead and panicked Red Sox fans inside Fenway Park and out.

Kemp, in particular, did most of his damage at key times. The versatile 26-year-old had a .822 OPS against AL West divisional rivals, as opposed to a .674 OPS against all other teams. White had a .341 batting average in high-leverage situations, the best on the Astros this season.

González and Marisnick saved their best hitting for the pennant race. After posting a .660 OPS through July, González registered an .875 OPS from August on, the third-best mark on the team. And even though Marisnick played much more sparingly in the second half, he still posted an .876 OPS after posting a .595 OPS in the first half.

Reddick homered in Game 1 of the ALCS, his first postseason home run since 2013.

But of all the Astros' complementary players, it has been González, the 29-year-old Venezuelan super-utilityman, who has stepped to the front of the class this October. He led the team with seven hits and five RBIs in the division series against Cleveland, batting .538.

"Marwin has been one of our biggest contributors in the playoffs. If you got an MVP award in the ALDS, you've got to hand it to him," Reddick said. "It's pretty special in this lineup when we can get guys out of the 6, 7, 8, 9-hole to really get some rallies going."

Kemp credits González for his own breakthrough this season as a multipositional player.

"Being able to pick his brain the past two years has been beneficial for me because we've always had that role player," Kemp said. "You're in there, you get hot, and then you have to sit for three games. Being able to talk with Marwin, he's one of my favorite guys in the clubhouse just because he brings that passion to the game every day. I can't say enough good things about him."

Bregman recognized the role players on the Astros roster as essential to their World Series championship in 2017, and they continue to be key for the team's success.

"If you look back at last year's postseason, I think that every single person on our roster contributed in a big way in a big situation," Bregman said. "If they didn't come through, we don't win the World Series. So many different people came up clutch and so many have taken that with them into this year."

If the Astros win a pennant or the World Series this year, that's likely to be the case again.

"I was talking to Jake on the bench about it," Kemp said. "You have to think about this: Correa went down, Altuve went down, Springer went down. When you think about those three guys, and the guys who came in, the Jake Marisnicks, the Tyler Whites, the Josh Reddicks, the Marwins, the people who stepped up, you really understand how important it is to have depth in organizations. It's a testament to Luhnow and all the guys that have been putting this team together."