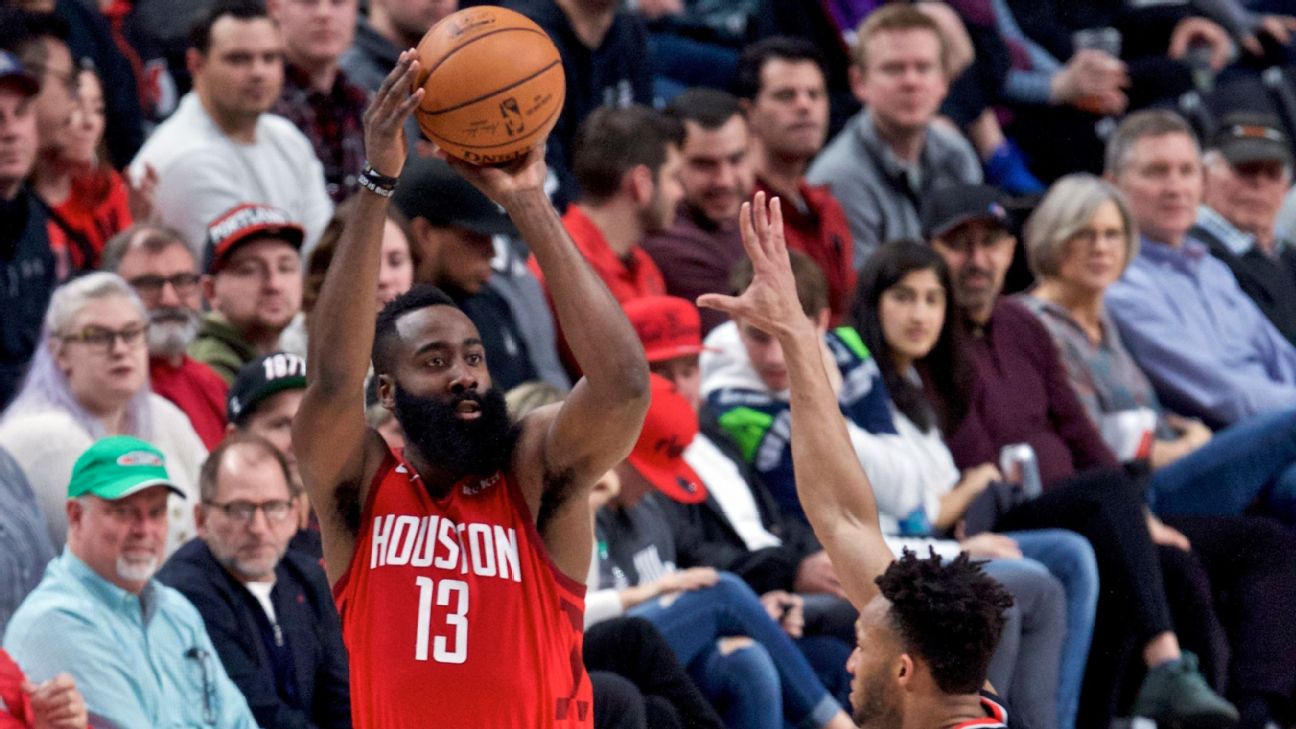 PORTLAND, Ore. -- With a missed layup with five seconds remaining, James Harden's historic scoring five-game run of at least 40 points came to an end in the Houston Rockets' 110-101 loss to the Portland Trail Blazers on Saturday night.

"Well, we held [Harden] under 40, so I guess that's a win," Blazers coach Terry Stotts said.

"Honestly that streak is pretty cool for stats and whatnot, but honestly the win is more important," Harden said. "So, came up short and now we've got another opportunity to go home and play Denver, who's playing exceptionally well. So we've got to regroup."

Harden said he was unaware he was two points short of 40 when he drove to the rim down nine with a few seconds left. He had an obvious off night, with coach Mike D'Antoni suggesting there was possibly some lingering emotion hanging on Harden and the team after their stunning overtime win against the Golden State Warriors on Thursday. Harden started slowly, scoring only nine points on 3-of-15 shooting in the first half.

"My shots were flat in the beginning of the game," he said. "So I just had to adjust a little bit, get them up. That was another thing, for myself I've got to get off to a better start. I picked it up in the third quarter and the second half, but that first half I had the same opportunities I normally get but my shot was just a little flat."

Harden got it going in the third, scoring 20 in the quarter on 8-of-13 shooting. He had the full arsenal at his disposal -- step-back 3s, drives to the rim and, of course, free throws. But after playing the entire third, he sat out the opening of the fourth quarter and didn't score in the final frame until hitting a 3 with 2:13 left. He got three free throws after an unusual call whenEvan Turner fouledPJ Tuckerwhile Harden was taking a 3, and hit a deep 3 with 34 seconds left.

"Nah, nah. Nah," Harden said of any fatigue catching up to him after this stretch of games. "Like any other player that has confidence, every shot you shoot isn't going to go in. You know what I'm saying? But you've got to keep shooting, stay aggressive and keep that mentality, but as long as we continue to fight for each other, continue to play untilChris [Paul] and Eric [Gordon]get back, that's what we have to do. We've got to figure out ways to win games and tonight wasn't the way we wanted to go, but we've got plenty of more opportunities."

Harden attempted 35 of the Rockets' 84 shots on Saturday, with Austin Rivers taking the second most with 15. Over the past seven games, Harden is averaging 29.4 shot attempts, including an astonishing 17.4 from 3.

"If they're good shots," D'Antoni said of the shot distribution. "He's our best shooter, so yeah, as long as they're good shots. The beauty of the team is that whoever is open is going to shoot, it doesn't matter ... James, that's where his greatness is kinda overlooked because he does not care. He will get his 40 points. He'll find a way. But in the meantime if you're hot, you score, if not you're not."

With Maurice Harkless an unexpected scratch after being listed as probable, Turner had the primary assignment on Harden.

"He's an amazing offensive player," Turner said. "He's been on a hell of a run and obviously he's the head of the snake, so I was just trying to pick him up, wear him down, tire him out and not try and get any cheap fouls. Just contest his shot, make sure I don't foul when I contest and that's pretty much it."

Harden's five-game streak put him in a group with Kobe Bryant, Michael Jordan and Allen Iverson as the only players to have such a run in the past 50 years. He did extend a different streak, though, making it 10 consecutive games with at least 35 points and 5 assists. Oscar Robertson previously held the NBA record for most consecutive 35-point, 5-assist outings at seven games.

"It's unbelievable now, you grade him on a sharp curve where if he gets 38, now if he doesn't get 40 it's like, 'well, what's wrong with you?'" D'Antoni said with a chuckle. "He's gone up another level. and he'll stay up there. And that's why when people say, 'he can't continue on this tear,' yeah he can, because he's doing it with ease, as long as he stays healthy."