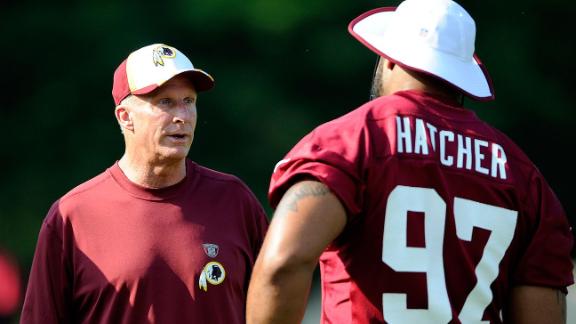 ASHBURN, Va. -- Washington Redskins coach Jay Gruden vowed there would be changes after a 4-12 season, and the first occurred Wednesday, when the team announced a mutual decision to part ways with embattled defensive coordinator Jim Haslett.

Haslett, who had one year left on his contract, finished his fifth season in Washington and first under Gruden. But he had become a lightning rod of the fans' frustration.

On Monday, Gruden said he would recommend retaining Haslett.

"Jay and Jim had been talking the last few days. This morning when they were talking they decided it was the best way for both sides," Redskins general manager Bruce Allen said. "I appreciate Coach Haslett's work and what he has done for the Redskins, but I think it was the right decision."

Under Haslett, the Redskins' defense has finished a collective 29th in the NFL in total yards and 30th in points per game. This season, the banged-up unit ranked 20th in total yards and 29th in points allowed. Washington suffered injuries to key starters: cornerback DeAngelo Hall, linebacker Brian Orakpo and nose tackle Barry Cofield. A number of other backups also were hurt, including nickel cornerback Tracy Porter. And defensive lineman Jason Hatcher, signed in free agency, did not provide the boost needed and eventually wore down from knee injuries.

One source of frustration in recent years for Haslett was an inequity in where money was spent on the roster. This past season, for example, the Redskins spent a total of $59,798,367 on 28 offensive players compared to $53,228,545 on 36 defensive players.

"[Haslett] would take the '85 Bears defense and turn them into a mediocre defense," Fletcher said. "He has no idea what he's doing. He's proven year in and year out that he's not a good defensive coordinator."

"Jay Gruden better get him out the door, because he's probably backstabbing Jay Gruden like he did everybody else," Fletcher said.