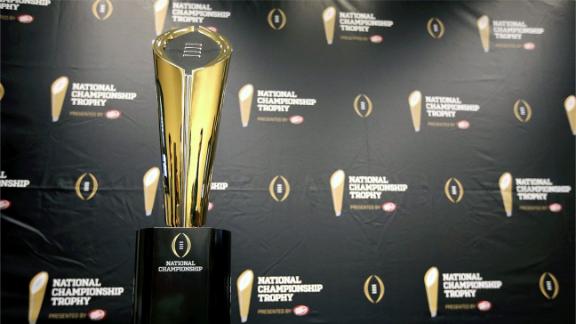 The College Football Playoff selection committee announced its official policy Thursday as nine of 13 committee members have been recused from voting for certain schools.

Five of those committee members are sitting athletic directors, including Long (the committee chair), Radakovich, Haden, Luck and Alvarez. Rice is a professor at Stanford, and Gould is the former superintendent of the Air Force Academy.

Tyrone Willingham, a committee member who coached at Washington, Notre Dame and Stanford, was not on the recusal list.

Bill Hancock, executive director of the CFB Playoff, said Willingham was not recused because the playoff's recusal policy doesn't require him to be.

"If you look at the recusal policy, he's not compensated by any school," Hancock said. "He doesn't have any relatives who are compensated by a school, nor does he provide professional services to a school."

Recused committee members are allowed to answer only factual questions about their respective school affiliations, but aren't allowed in the room during any deliberations regarding that team's selection or seeding. The committee has the option to add other recusals.

The selection committee will rank 25 teams throughout the season, including the final four teams that will advance to the first College Football Playoff. The group will first choose the teams to be placed in the playoff, and will then select teams for the contract bowls (Rose, Orange and Sugar) before finishing with the Cotton, Fiesta and Peach bowls.

Long said the committee did a mock top 25 ranking, along with a mock seeding of the "New Year's Six" bowls, which will include the two semifinal bowls (this year, the Rose and Sugar), and the Orange, Cotton, Peach and Fiesta.

In order to determine the top 25 teams, the committee will go through seven rounds of ballots, not including a possible re-vote if three committee members feel another group of teams needs to be considered. The committee members will start with a small pool of teams to be evaluated and will rank those teams, with the top-ranked teams being placed in the rankings in groups of three or four. Individual ballots -- which will not be made public this season -- will be compiled into a composite ranking.

"We looked at previous years, and there was spirited debate," Hancock said. "We really dived into some teams' résumés and compared them in a very extensive way."

Among the factors that will be used to determine the four best teams are conference championships, strength of schedule, head-to-head competition, comparative outcomes of common opponents and other relevant factors such as key injuries.

The committee, which concluded its final meetings of the preseason, met Tuesday through Thursday in Colorado Springs. They will have teleconferences for the first half of the season, but will not meet in person again until Oct. 27-28. They will continue to meet every Monday and Tuesday following for the rest of the season.

The first rankings for the playoff will be revealed Oct. 28 on ESPN.