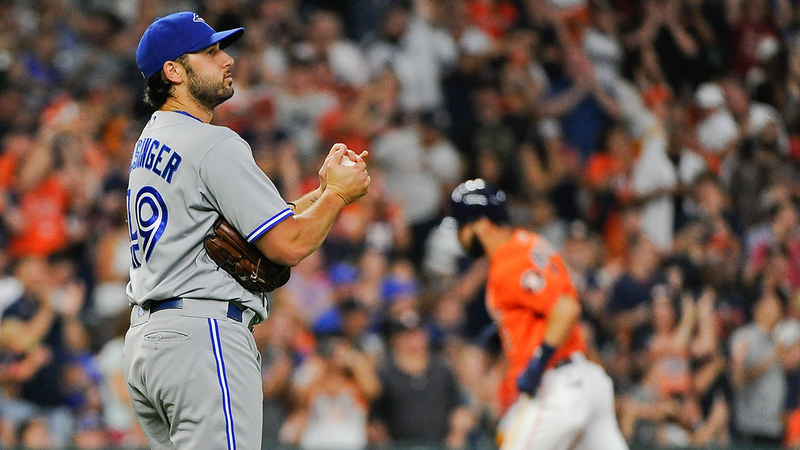 Former major league pitcher Mike Bolsinger amended his lawsuit against the Houston Astros to include Astros owner Jim Crane and baseball-operations staffer Derek Vigoa, according to a document filed in a Los Angeles court Thursday.

Bolsinger, 32, filed a civil suit Feb. 10 alleging the Astros had engaged in unfair business practices and negligence via a "duplicitous and tortious scheme of sign-stealing." In Bolsinger's last major league outing, on Aug. 4, 2017, the Astros scored four runs in a third of an inning against him while allegedly using their trash-can-banging system on 12 of the 29 pitches he threw.

The initial complaint named the Astros organization but included so-called Doe defendants, allowing it to be amended to add individuals allegedly involved. Others who allegedly participated in the scheme, which has enraged players and fans and caused consternation across the sport since spring training began, could join Crane and Vigoa as defendants.

Crane has been under scrutiny since a news conference on Feb. 13 during which he said the Astros' cheating during the 2017 season "didn't impact the game" and that "I don't think I should be held accountable." After an investigation into Houston's sign stealing, MLB fined the Astros $5 million, docked their first- and second-round draft picks in 2020 and 2021, and suspended manager AJ Hinch and general manager Jeff Luhnow for one season. Crane fired both on Jan. 13, the day commissioner Rob Manfred released his report on the matter.

Vigoa, who is listed on the Astros' website as senior manager of team operations, was an intern in 2016 when he introduced Luhnow to a system developed by the baseball-operations department called "Codebreaker," according to a Wall Street Journal story. An Excel-based algorithm designed to decode signs, it was used "in an inappropriate way," Manfred said Tuesday.

Bolsinger's complaint seeks monetary damages for the scheme "harming his career." The Toronto Blue Jaysdesignated Bolsinger for assignment after his outing against the Astros, and he has not returned to the major leagues, spending the past two seasons with the Chiba Lotte Mariners in Japan. "What took place in Houston on August 4th could and did prove to be the death knell" of Bolsinger's big league career, according to the complaint. Of the 60 Astros home games in 2017 tracked by fan Tony Adams, Aug. 4 had the highest total of trash-can bangs: 54.

Additionally, Bolsinger asked for the Astros to redirect the nearly $31 million players received via postseason shares to "charitable causes focused on bettering the lives of children with an emphasis on charities in Los Angeles as well as a fund for elderly retired professional baseball players in need of assistance."

Though the lawsuit was filed in Los Angeles County, the jurisdiction of a potential case has yet to be determined. The complaint said the Astros have "member-investors involved in the fraudulent scheme who reside in Los Angeles, California"-- and Crane reportedly owns property in the Los Angeles area. A January story in Variety said he bought the home of actress Michelle Pfeiffer and her producer husband, David E. Kelley, for $9.1 million. The property, according to Variety, is next door to another in the Pacific Palisades neighborhood that Crane has owned since 2010.
Report a correction or typo
Related topics:
sportscheatingmlbhouston astrosbaseballtoronto blue jayslawsuitsports
Copyright © 2021 ESPN Internet Ventures. All rights reserved.
TOP STORIES
Shooting at 100-person Airbnb party leaves 2 teens shot
Grandmother's family to ask for help in finding her killers
'Lost another great person': Community holds vigil for tattoo artist
How a song helped a woman save her husband from a heart attack
Amazon Prime Day sees Walmart, Target offering their own deals
Rain chances rise Monday night with rare June front
Man shot by police broke into deputy's home, HPD says
Show More
Mother and daughter killed at W. Houston apartment
Off-duty deputy's wife, 4-year-old injured in home invasion
Tokyo Olympics to allow limit of 10,000 local fans in venues
Woman accused of shooting boyfriend to death after argument
LA meteorologist keeps viewers informed remotely during cancer fight
More TOP STORIES News