ESPN
1 / 10
Houston Astros' Carlos Correa in action against the Seattle Mariners in a baseball game Monday, April 10, 2017, in Seattle. The Mariners won 6-0.
AP Photo/Elaine Thompson
SEATTLE, Washington -- James Paxton gave Seattle manager Scott Servais and the Mariners exactly the reset they needed after a horrid first week on the road.

"It's opening day, the first day of the season," Servais joked. "With what happened this last week, especially yesterday, we needed to bounce back. I felt strongly we would."

Paxton provided the fresh start, pitching seven innings of four-hit ball and leading the Mariners past the Houston Astros 6-0 on Monday in Seattle's home opener.

Paxton shut down Houston for the second time in a week, helping the Mariners rebound from Sunday's ugly ninth-inning collapse against the Angels when they gave up seven runs and lost 10-9. Paxton (1-0) kept Houston's offense silent long enough for Seattle's bats to wake up and finally convert with runners in scoring position. He struck out eight and walked two while pitching in Seattle's home opener for the second time in his career.

"I feel really confident in what I'm doing and focusing on the process of what I need to do out there ... and so far getting the good results we need," Paxton said.


In 13 innings against the Astros this season, Paxton has not allowed a run and scattered six hits. Carlos Correa had Houston's first three hits on Monday -- two of which didn't leave the infield -- and Carlos Beltran added a single in the seventh inning to put two runners on with no outs. Paxton got Evan Gattis to foul out, struck out Marwin Gonzalez and got defensive help from Leonys Martin running down Josh Reddick's drive to cap the outing.

"I think he's gonna give the whole league a hard time if he has that kind of power and that kind of ability to land his breaking ball -- development things over the last year or so we've seen him do," Houston manager A.J. Hinch said of Paxton.

Nelson Cruz finally broke through with a two-run single in the fifth inning to give Seattle the lead and Mitch Haniger followed an inning later with a two-out RBI single. Seattle was 8 for 57 through the first seven games and 1 of 8 on Monday with runners in scoring position before Cruz lined Charlie Morton's pitch into center field.

Morton (0-1) allowed three runs and seven hits and struck out six. He escaped jams in the third and fourth innings before Cruz came through for Seattle in the fifth.

Not all went well on opening day for Seattle. Shortstop Jean Segura left the game after the bottom of the third inning after straining his right hamstring. It first bothered Segura early in the game and appeared to be aggravated by diving back to first base trying to avoid the tag after Houston first baseman Yuli Gurriel caught a line drive. Segura was replaced by Taylor Motter.

Servais said the team hoped to have a better idea the severity of the injury on Tuesday.

"It's very mild. Fingers crossed he'll be OK tomorrow or the next day," Servais said.

A couple of Seattle's stars that struggled through the first week on the road enjoyed being home. Cruz had three hits, raising his average from .080 to .172. Kyle Seager had two hits and a sacrifice fly to score Seattle's third run. Seager's second hit was a line drive double off the wall in the seventh.

For a moment the Astros were without Jose Altuve. During the lengthy pregame ceremony as part of the Mariners' home opener, both rosters were introduced. When the Astros lineup was announced, Altuve was nowhere to be found. His absence was brief. While the Mariners were being announced, Altuve quietly walked out to his spot on the third base line.

Mariners: RHP Tony Zych (biceps) will continue his rehab assignment at Triple-A Tacoma with no set date on when he'll rejoin the Mariners. They would like to add his power arm to the bullpen, but he's struggled in two outings in the minors giving up three runs on five hits in brief appearances.

Mariners: LHP Ariel Miranda (0-0) makes his second start of the season. Miranda gave up two runs over five innings in his first start vs. Houston.

Do the Bearkats have what it takes to get crowned champions?
Houston's Altuve puts 10-game hit streak on the line against Rangers 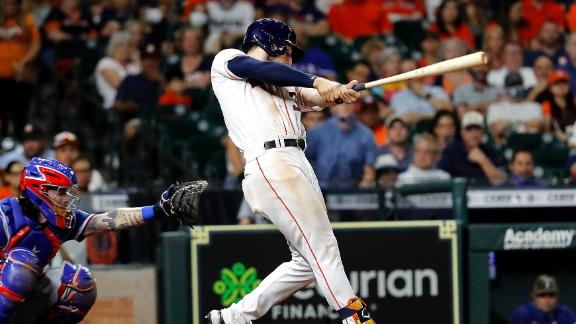