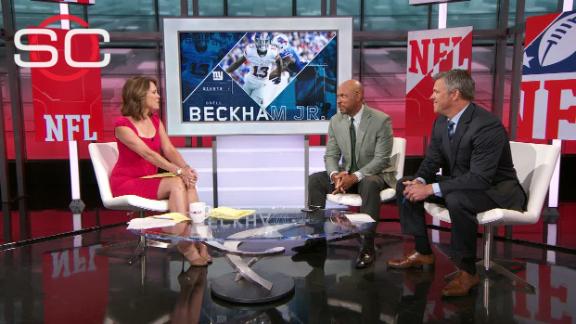 A few words by Beckham will add more spice to a budding rivalry.

"The reason he's become so relevant is because of me," Beckham told GQ for its August issue, which has yet to go online.

When Beckham and Norman faced each other last December, with the latter then playing for Carolina, it produced a highlight reel of good and bad: More attention focused on their extracurricular activity than anything else. Beckham earned a one-game suspension.

Then Norman signed with Washington this offseason, immediately leading to thoughts of a twice-yearly matchup with Beckham.

The Giants receiver told GQ that "for sure" Norman is in Washington because of him and called it a "smart business move for him." The fact that Washington gave him $15 million a season didn't hurt, either.

Norman heard about the matchup quite often this spring at Redskins Park -- one time, a young boy visiting practice asked him why he hated Beckham. Norman just laughed. "It goes back to what I was saying," Beckham said. "If I wasn't playing him twice a year, maybe people wouldn't bring it up as much. But now it'll be a lot more media attention for him, attention that I don't really look for, attention that I don't need."