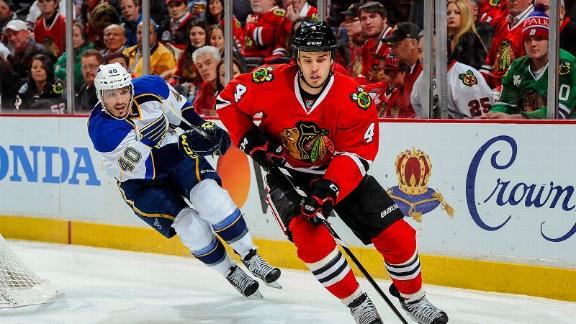 ST. PAUL, Minn. -- Chicago Blackhawks defenseman Niklas Hjalmarsson will play against the Minnesota Wild in Game 3 of their Western Conference second-round series Tuesday night despite not being medically cleared to speak after being struck in the throat area by the puck during Game 2 at the United Center.

Hjalmarsson was hit by a shot during the first period of Game 2 on Sunday. He fell to the ice and remained there for a few minutes. He skated to the bench on his own, was examined by the Blackhawks' medical staff and returned to the ice for his next shift.

"He's a tough character," said Johnny Oduya, Hjalmarsson's defense partner. "He's a Swedish Viking. He's one of a kind, obviously. It's good for morale. We know he's always out there doing his job.

"I was more worried he got hit in the eye or something like that. I didn't see what happened. But obviously he boosts morale for the team. We have a couple guys that step up and block a lot of shots, especially on the [penalty kill]. It's something we need."

Hjalmarsson wore a protective neck guard during the morning skate.

Quenneville said Hjalmarsson would face some challenges in being unable to speak during the game.

"Obviously you like to talk to the goalie playing it, your partner, whether he's got an out or you're the out; sometimes that can be beneficial," Quenneville said. "We always want to communicate on the bench, make sure we're talking as well. But I think we're familiar with a lot, and he's familiar with the players around him and changes as well.

"He's pretty aware of how to play the game and those types of situations. Maybe he's got to adapt a little bit, but for the most part, we expect him not to change too much."

Hjalmarsson leads all players with 30 blocked shots in the postseason. He had four blocks against the Wild in Game 2.

The Blackhawks lead the best-of-seven series 2-0.