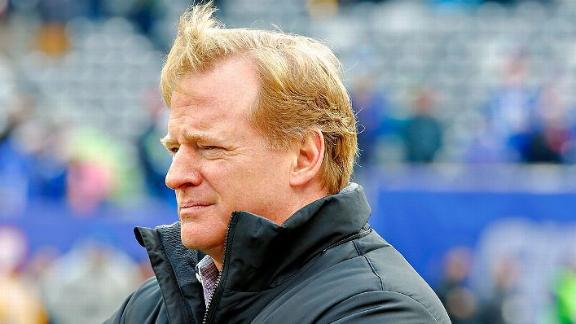 NEW YORK -- New NFLPA president Eric Winston said the NFL's plan for HGH testing is on hold because players don't agree with the league's stipulation that commissioner Roger Goodell be the final arbiter in particular disputes around the testing process or the results.

"It's there when [Goodell] wants to sign it," Winston said. "I kind of laugh because it keeps coming up. If he wants HGH testing as bad as he wants to retain his power, then we would have had HGH testing last year. At the end of the day, that's what this is all about: He wants to hold all the cards and he wants to be the judge, jury and executioner, and we're not going to go for an un-American system like that."

Winston made the comments during a meeting at a midtown hotel Wednesday, the day before the first round of the NFL draft.

"It is kind of funny because since 2011 the union has come up with one excuse after another to avoid implementing an agreement to test for HGH," Aiello wrote. "First, it was the testing method; then it was the population study; now it's commissioner authority. Our commitment to testing is clear. The same cannot be said of the union."

The issue has been a lingering point of contention for both sides since a new collective bargaining agreement was passed in 2011, and it arose again this week when Goodell renewed his call for the union to sign an HGH agreement.

"The world has accepted the science," Goodell said in an interview with NFL Network. "There's global understanding of that. And the union needs to sign off on that. It's time to sign off on what we agreed to. They have raised issues. We have addressed all those issues. They're now raising, from time to time, issues that are completely unrelated to HGH testing."

It seems that the NFL and the union don't even agree on the reason they are disagreeing.

NFLPA executive director DeMaurice Smith said every term other than arbitration method has been agreed upon.

Smith cited the suspension of the New York Yankees' Alex Rodriguez as an example, noting that baseball used a neutral arbiter in its review process.

"We've agreed to everything, except the commissioner wants to be the hearing officer in those final two cases," Smith said. "That's the only thing that's held this up."

Winston said it's been the issue he has been asked about most since he assumed the role of NFLPA president in March, and he said that players won't accept another disciplinary procedure in which Goodell wields all the power.

"[Testing is] not something the players don't want, and when you get into taking blood, there needs to be a neutral arbitrator to deal with all those issues."

NFLPA: NFL's HGH Testing Stance Is 'Un-American'
Mark Dominik discusses whether he agrees with comments made by NFLPA president Eric Winston that NFL commissioner Roger Goodell wants to be judge, jury and executioner when it comes to HGH testing, and whether that would make the process "un-American."
Related topics:
sportsespneric winstonnflnflparoger goodellarbitratorarizona cardinalshgh testing
Copyright © 2021 ESPN Internet Ventures. All rights reserved.
TOP STORIES
Money in Lakewood Church wall may be tied to 2014 theft, HPD says
Fugitive task force searches for parents charged in MI school shooting
Fatal West Loop crash prompts traffic backup at 18th Street exit
Pasadena PD searching for suspect who stole Boy Scout trailer
Family of Navy vet shot to death on N. Fwy searching for answers
Watch 'ShopLocalish: Holiday Deals and Steals' with Tory Johnson
First, it was catalytic converters, but thieves moving to this part
Show More
Record highs possible Saturday, and Sunday will be steamy too
UH could turn national title picture upside-down if it beats Cincy
Mark Cuban buys entire Texas town, but what will he do with it?
How new TX law could impact topics educators can discuss in classroom
Omicron variant discovered in at least 7 US states
More TOP STORIES News