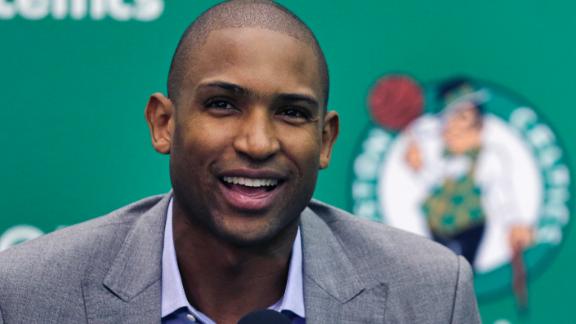 Everyone had their own theories for why Al Horford left the Atlanta Hawks for the Boston Celtics. Two of them -- that Hawks fans weren't good enough and he didn't want to play with Dwight Howard -- can be taken off the list.

After Horford agreed to a four-year, $113 million contract with Boston on July 2, his father spoke about Atlanta.

"There wasn't as much motivation for him when he saw all the empty seats when they were winning," he told the Boston Globe. "He said to me, 'Dad, when we were playing Boston, they were down 15 points and they were cheering their team like they were winning the game. They're so into the game.' This is special for us, especially for him."

In an interview with the Atlanta Journal-Constitution that was posted Monday, Al Horford said he didn't have any problems with Atlanta's fans and that he was disappointed in his father's comments.

"That made me really upset," he said. "I was angry when I heard about that because I never felt that way. I've been here a long time. I've actually gotten to know a lot of our fans, a lot of our season-ticket holders with the Hawks. They've always been great to me. I've always been very content and happy with the way they've treated me and my family.

"Parents are sometimes a little more passionate about their sons and daughters. I can relate because I have a son now. So my dad, with him, sometimes he would come to the games and get frustration. His frustrations don't reflect on me with the fan base."

The other big idea circulating was that Horford jumped ship after the Hawks agreed to a deal with Howard, whose reputation has taken a hit after failed stints with the Houston Rockets and Los Angeles Lakers. CBS Sports cited a person familiar with the situation as saying that Horford "didn't want to play with Dwight."

"No, no, no. Not at all. I don't have a problem with Dwight at all," Horford told the Journal-Constitution. "I think that he is a great player and he has a lot of ability and a lot of potential. It has nothing to do with not wanting to play with Dwight. I don't know if you remember but there was a time when I wanted to play power forward. With a guy like him, that would have been easier. It had nothing to do with Dwight. He's a good guy."

Horford said that as free agency loomed, his first option was always to stay in Atlanta, the only NBA team the 29-year-old has played for.

"I started to see that when the team stepped up and did what they had to do, I didn't think we were on the same page," he told the newspaper. "That's when I was forced to start looking at other options."

And it wasn't fans or Howard that forced that, it was "from a financial standpoint," Horford said.

When that door opened, Boston stepped in.

"When I took the meetings with the other teams, I met with Boston and other teams as well, when I sat with them I just saw the roster and their vision," Horford said. "There was a lot of impact on me with [general manager] Danny Ainge and coach [Brad] Stevens. It was a very positive meeting. Two of their owners were in the meeting and three or four of their players were there too. They seemed like a very close group and were focused on what their goal was and they got my attention.

"I wasn't sure in what direction I was going to go. But I knew in order to leave Atlanta it was going to take a very special situation."