NBA will consider rule changes to speed up end of games 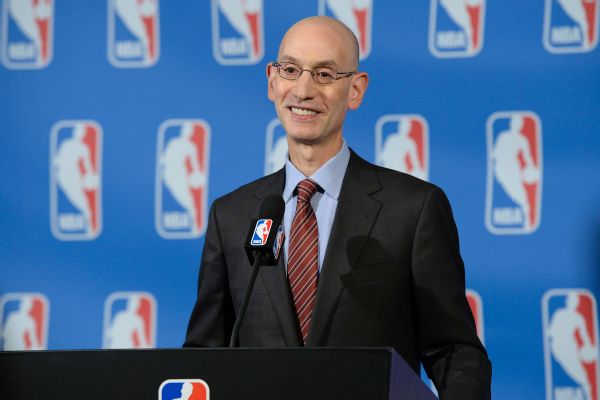 LONDON -- NBA commissioner Adam Silver says the league has its eye on speeding up the end of games, with a focus on retaining younger fans who "have increasingly short attention spans."

Silver, speaking Thursday before the Denver Nuggets' 140-112 rout of the Indiana Pacersat London's O2 Arena, said the NBA started studying the issue last year -- specifically, the number of timeouts that are allowed in the final two minutes -- and will review it again at the end of this season.

"It's something that I know all of sports are looking at right now, and that is the format of the game and the length of time it takes to play the game," Silver said. "Obviously people, particularly millennials, have increasingly short attention spans, so it's something as a business we need to pay attention to."

Silver said the protracted nature of some games can be a mixed blessing.

"When the last few minutes of the game take an extraordinary amount of time, sometimes it's incredibly interesting for fans, other times it's not," Silver said. "The short answer to your question is we are going to take a fresh look at the format, specifically in the last two minutes."

Silver said the NBA's competition committee reviews such matters and takes them to the league's full board of owners.

"It's something that we track very closely," Silver said. "In the league office we time out every game, we know exactly how much time each possession takes and, again, we can also look at minute-by-minute ratings, so we know at what point fans are potentially tuning out as well."

The NBA will also likely increase the number of regular-season games played overseas.

"We hope to increase the number of international games that we play," Silver said. "We don't have any specific plans in place yet. It's a function of the quality of the arenas and the amount of interest in those markets.

"One thing that will help us going forward is we have just finished our collective-bargaining agreement, and that will be final in the next week or so. What we've done in the CBA is to add an extra week into the season and have the same number of games but an additional week.

"This will be helpful in allowing international play [at] midseason, as we can build in those extra days for rest for those traveling long distances. This will allow us to take a fresh look in the markets throughout Europe which is where, from a practical standpoint, it is more likely that we can add additional season games. That is something we are focused on."

Silver said NBA needs to do more to grow the game in the Middle East and the UK and said he can see the league taking a preseason game to Australia.

Silver also paid tribute to Herb Simon, the Pacers' owner, saying he has been a mentor to him. And because of Simon's contributions to the NBA over the years, Silver says "Indiana should be top of the list" to host an All-Star Game in 2020 or 2021.
Related topics:
sportsespncommissionersattention spanslondonformattimeoutsend of gamesdenver nuggetsnbao2 arenaoverseasmillennialsinternational playindiana pacersadam silver
Copyright © 2022 ESPN Internet Ventures. All rights reserved.
TOP STORIES
LIVE NOW: HPD gives update in Pct. 5 corporal's ambush murder
Sergeant was to walk daughter down aisle until his hit-and-run death
Grab the umbrella! Widespread showers move in Monday
'We knew something big exploded': ABC13 recalls moment of Watson blast
2 adults killed and 12-year-old hurt in crash with speeding tow truck
Dad charged and fired from job after racist tirade posted on TikTok
Bad Bunny announces stadium tour stop at Minute Maid Park
Show More
5 tax changes that can boost your refund this year
Getting paid on Venmo or Cash App? New tax rule might apply to you
Tax filing season starts Monday. What to expect for 2022
Texas agriculture commissioner suing to stop aid for Black farmers
Kohl's, target of activist investors, gets a buyout offer
More TOP STORIES News