When the NBA's 2021-22 schedule was released, fans of the incoming rookie class could circle Wednesday night as their first chance to see the top six picks from the 2021 NBA draft in action in the regular season. At least that was the plan, until Cade Cunningham suffered an ankle injury in training camp that kept the No. 1 pick sidelined for the entire preseason and for the Detroit Pistons' regular-season opener against the Chicago Bulls.

Still, while Cunningham wasn't in uniform, No. 2 pick Jalen Green -- the Rookie of the Year favorite -- was, as were No. 3 pick Evan Mobley, No. 4 pick Scottie Barnes, No. 5 pick Jalen Suggs and No. 6 pick Josh Giddey. They all added their names to the list of nearly 4,600 players who've stepped onto an NBA court in the league's 75-year history.


Did Green look like the Houston Rockets' franchise star? Did Mobley play like the next great two-way player? Our experts break down the rookies' debuts and what their respective teams can take away from the performances.

MORE: Power Rankings, projections and intel for all 30 NBA teams

Cunningham's NBA debut has been put on hold thanks to a sprained right ankle he injured near the start of training camp. However, the Pistons seem optimistic the No. 1 overall pick from the 2021 draft will be playing in games soon. Pistons general manager Troy Weaver told a Detroit radio station Wednesday he "would anticipate hopefully seeing [Cunningham] when we get back off the road." After opening at home with a loss to the Bulls, Detroit has three consecutive road games before hosting the Orlando Magic on Oct. 30.

The Pistons have been cautious with Cunningham, who missed the entire preseason, not wanting to rush him back until he feels 100 percent. He returned to practice recently, and there was some hope of him playing in the season opener, but the team wanted him to build up his conditioning. When he does return, Cunningham will immediately enter Detroit's starting lineup as the centerpiece of its young core and most promising piece of the team's future. Even if there are some growing pains, the Pistons are going to give him a chance to play through it. Cunningham's size -- 6-foot-8 as a guard -- shooting ability and passing vision made him the top draft pick out of Oklahoma State this summer and could make him one of the top contenders for Rookie of the Year.

Anthony Edwards, the No. 1 pick in the 2020 draft, shot 34.7% from the floor and had more turnovers than assists during the first month of his career. Let that serve as a polite reminder for Rockets fans that patience is required with teenage shooting guards, no matter how talented.

Edwards, building off a strong finish to his rookie year, had a sensational start to his sophomore campaign at Houston's expense, scoring 29 points in 31 minutes during the Timberwolves' season-opening 124-106 rout of the Rockets.

Green, the No. 2 overall pick whom Houston hopes can emerge as a franchise centerpiece, certainly didn't overwhelm anyone in his NBA debut. He finished with nine points on 4-of-14 shooting and was a game-worst minus-37 in 32 minutes.

Green arrived in the NBA with professional experience, having flourished with the G League Ignite fresh out of high school last season, but it's no surprise that growing pains come with making the leap to the NBA as a primary offensive option for a rebuilding team.

There were glimpses of the talent that convinced the Rockets that Green had perennial All-Star potential. The first bucket of his career was a driving reverse layup over Karl-Anthony Towns that displayed Green's rare physical ability. On the next possession, he had a crossover that caused Taurean Prince to stumble when the Minnesota wing got caught cheating toward the screen, leading to a lefty layup for Green. The rookie had four assists and no turnovers.

These were the first awkward steps of a long journey for Green.

It didn't take long for Mobley to show exactly why general managers selected him as the rookie from this class most likely to be the best player when we look back five years from now.

The skilled, graceful 7-footer looked like a potential Rookie of the Year favorite in a narrow road loss to the Grizzlies, flashing the two-way versatility that earned him pre-draft comparisons ranging from Chris Bosh to Anthony Davis (who finished with 21 points, 7 rebounds, 0 assists and 1 block in his NBA debut).

Cleveland shifted Mobley all over the floor, playing him a team-high 38 minutes split between power forward and center. The Cavaliers used him as a creator from the elbows, played him out of short rolls, let him work as a ball handler and facilitator, and spaced him out to the corner, where he knocked down a smooth catch-and-shoot 3-pointer.

Defensively, Mobley guardedJaren Jackson Jr. (3-for-12 from the field), Steven Adams, Kyle Anderson and Brandon Clarke, while regularly switching out onto Grizzlies guards with respectable success. Despite being credited with just one block, he changed several shots at the rim, highlighted by an impressive vertical challenge against Ja Morant.

Mobley did lose sight of Jackson on a few different occasions and got burned for open 3s. His lack of physicality came to light for stretches, with Adams and Jackson taking him out of plays with aggressive seals in the lane. Mobley's light frame cost him on the offensive end inside the paint at times, as well.

But even with a few very common rookie miscues, Mobley proved he's capable of playing next to a big like Jarrett Allen for spurts or a stretch-4 like Lauri Markkanen, which bodes well for the Cavs moving forward. With rare length, agility, touch and feel at his disposal, it might not take Mobley five years to prove that he's indeed the best player to come out of a loaded 2021 draft class.

Despite starting in a unique lineup featuring three combo forwards and two lead guards, Barnes regularly initiated the offense. He used several on-ball picks as the decision-maker off the dribble, but also set his share of screens for other ball handlers as well, similar to a role Pascal Siakam played for Toronto last season.

Barnes broke down the defense off the dribble all night but had difficulties finishing at the rim in traffic. However, he was able to draw enough defensive attention that at least one of his missed layups led to an uncontested putback dunk. Barnes' strong passing won't be reflected by paltry assist totals because the Raptors were ice cold for most of the game, but he did have a gorgeous assist midway through the fourth quarter, a one-handed bounce pass off the dribble to spoon feed Chris Boucher for the dunk.

Defensively, Barnes was the primary defender on Bradley Beal for a long stretch in the fourth quarter, during the time the Raptors went on a run to get back into the game. He did well moving his feet and staying in front of him, but Beal ran him off picks and the Raptors switched instead of letting Barnes fight through them.

On the downside, Barnes was overly aggressive on both ends of the floor, leading to six turnovers on offense and five personal fouls on defense, where he was too often caught falling for fakes or reaching to try to get his hand on the ball.

Still, Barnes' debut held the promise of good things to come. He showed outstanding versatility at both ends of the court, flirted with a points-rebounds double-double and gave a glimpse of the positionless multitool player that the Raptors want him to grow into.

Jalen Suggs' NBA debut probably won't be one he tells his grandchildren about. He struggled offensively (10 points, 3-of-14 FG, 1 assist, 3 turnovers, 30 minutes) in a disjointed, at times ugly, opening blowout loss for the Magic.

Suggs struggled to generate quality offense, settling for several difficult pull-ups from midrange and beyond the arc, while not finding much success around the paint either, running into brick walls or tossing up awkward floaters from difficult vantage points. Playing on and off the ball, he unselfishly looked to create for teammates but didn't find a great balance between creating and distributing, leading to some tentative moments that forced Orlando into late-clock situations.

Suggs' defense, considered a major selling point in college, was as good as advertised. He had multiple excellent one-on-one possessions that demonstrated his physical and aggressive approach getting over screens and containing opposing ball handlers thanks to his quick feet and strong frame. While he had some issues losing his man off the ball, he made up for that by generating turnovers, sliding in for charges and showing terrific activity flying out on closeouts.

Suggs is clearly still adapting to the longer NBA 3-point line while attempting to figure out a role on the fly for one of the youngest teams in the NBA, one that features a dearth of perimeter shooting and playmaking. From what we saw Wednesday, it looks like the Magic coaching staff will give Suggs a fairly long leash to play through mistakes, which should help him find more of a comfort level as he gains experience and develops better chemistry with his teammates.

Going against the Utah Jazz (last year's winningest team during the regular season) and center Rudy Gobert (the reigning Defensive Player of the Year), Giddey's NBA baptism was a challenging one. Still, Giddey showed the potential that led Oklahoma City to take him sixth overall.

That was evident on Giddey's first NBA score, less than five minutes in, as he drove the lane right at Gobert and scored a runner off the glass going left as Gobert retreated to his man. In the second quarter, Thunder coach Mark Daigneault called an after-timeout play for Giddey, who took a handoff from Kenrich Williams and used the advantage to beat Jordan Clarkson off the dribble before pulling up for a score in the paint that was in between a floater and a jumper.

The second half was more of a reality check for Giddey, given the tall task of running the point for Oklahoma City just days after turning 19. He was scoreless in 15 minutes after halftime, missing all four of his shot attempts.

With Lu Dort handling the task of defending Utah star Donovan Mitchell, Giddey spent most of his time defensively in the corners. That freed him up to make an impact crashing the glass for grab-and-go opportunities. Giddey pulled down a team-high 10 boards, becoming the first player in Thunder history to reach double-figure rebounds in his debut. 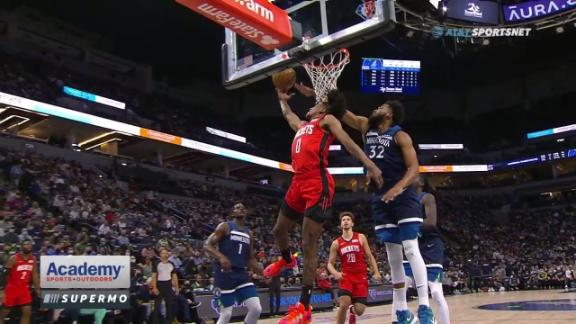 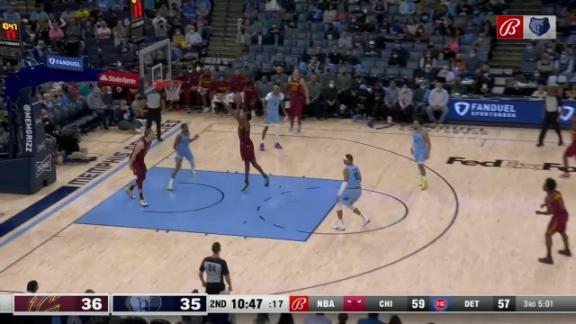 Mobley soars to the rim for dunk
Evan Mobley gets the ball at the top of the key and goes in for the flush. 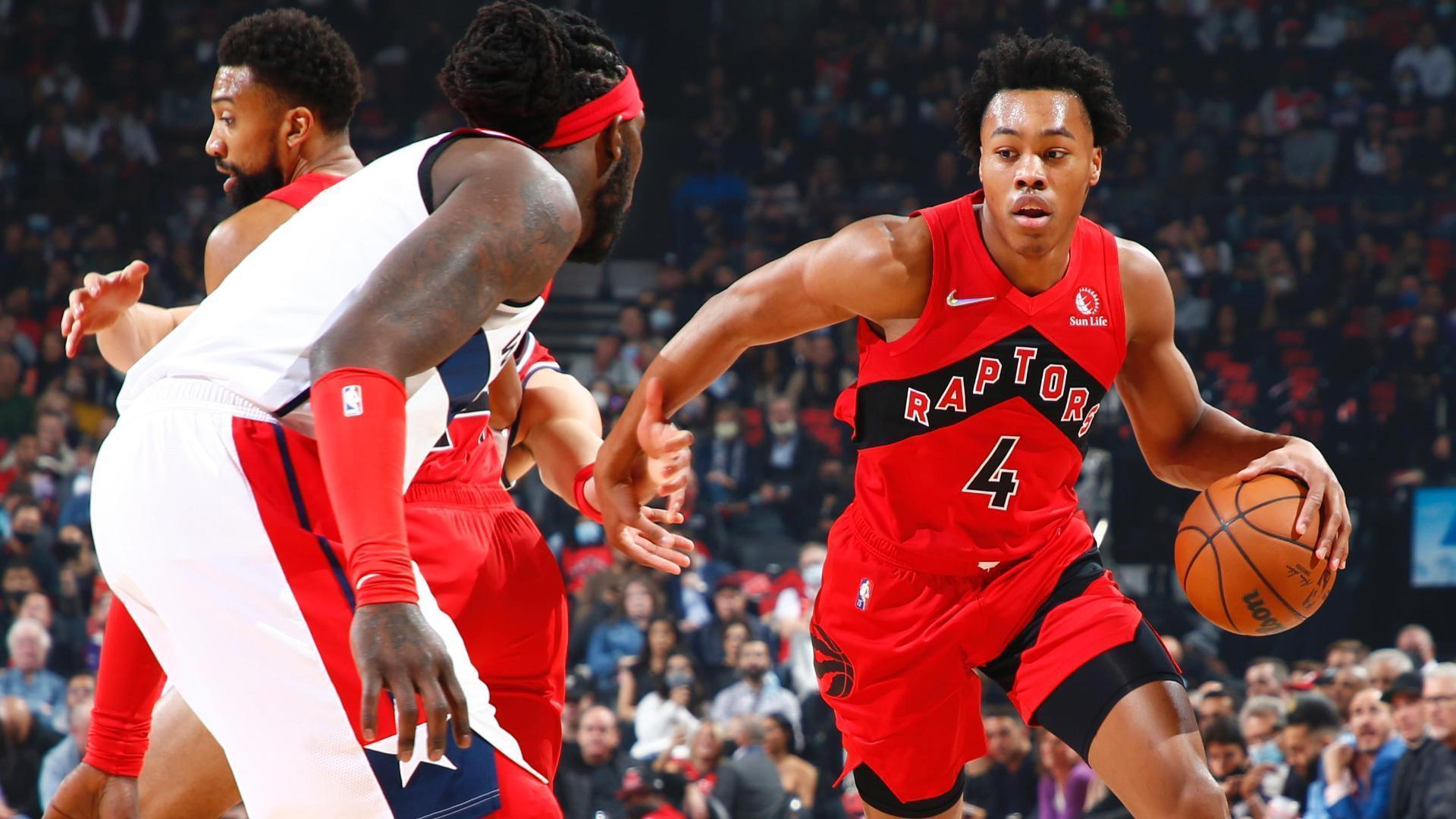 Scottie Barnes' first NBA bucket is a left-handed hook
Scottie Barnes gets on the scoreboard as he floats in a lefty floater in the lane. 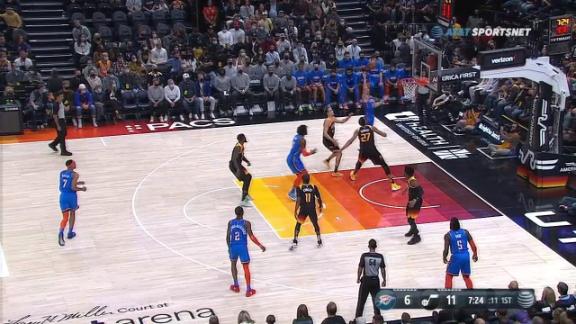 Josh Giddey drives for first NBA bucket
Josh Giddey finishes off the glass for his first points in his debut for the Thunder. 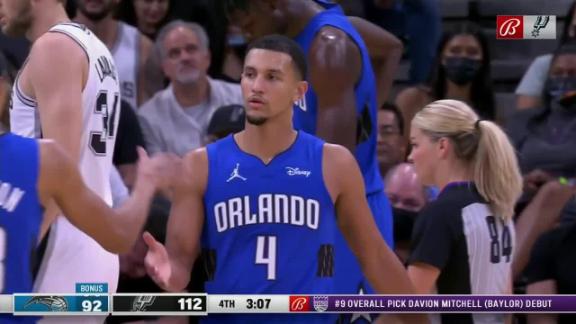 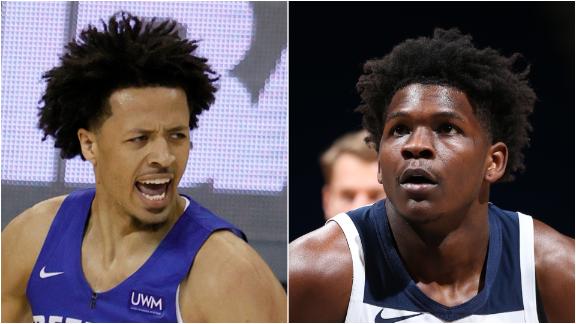