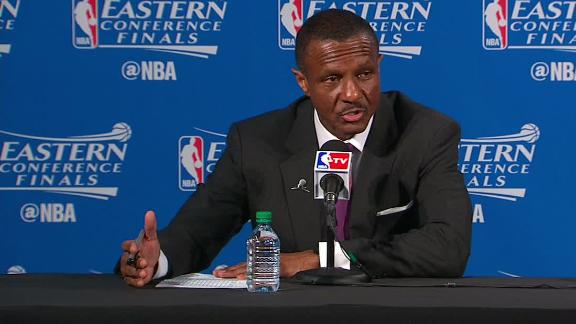 TORONTO -- Raptorscoach Dwane Casey was fined $25,000 for his criticism of the officiating, andCleveland Cavaliersguard Dahntay Jones was suspended for Game 4 for his low blow on Bismack Biyombo.

The NBA announced the fine and suspension on Sunday.

Casey repeatedly referenced a disparity in foul calls during the Eastern Conference finals following the Raptors' 99-84 Game 3 win. The Raptors have been called for 73 personal fouls compared to the Cavaliers' 46 fouls in three games.

Jones struck Biyombo in the groin on the final possession of the game, with 17.6 seconds left. Biyombo was doubled over in pain on the floor in front of the Cavs bench even after the game ended.

"I got hit in an area that I wasn't supposed to get hit on, or a private area, so to speak," Biyombo said after Game 3. "Whenever the league has a chance, they probably want to take a look at that. That's all I can say on that one."

"It is what it is, man," Jones told ESPN.com before the Cavs shootaround Monday morning. "Can't get too upset about it. It's unfortunate, but it is what it is."

Jones said he was interviewed by the league as part of their investigation into the incident.

Jones said the team was prepared to move past it.

"My teammates have all regarded it as just nonsense, but we won't let it distract us from what our overall goal is," Jones said to ESPN.com. "We'll sweep this under the rug and just proceed as if it's a normal business day."

LeBron James was asked about in incident involving Draymond Green and Steven Adams and alluded to Jones' suspension in his answer.