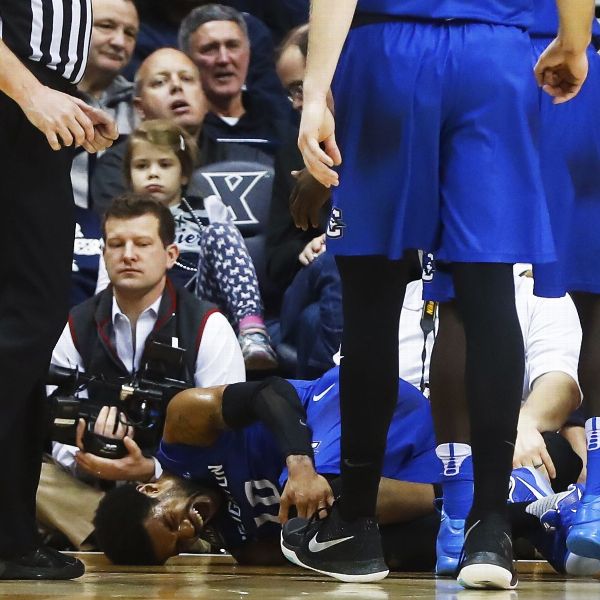 Creightonguard Maurice Watson Jr. suffered a torn ACL in his left knee during Monday's win against Xavier and will miss the remainder of the season.

An MRI on Tuesday revealed the extent of the injury.

Watson, a 5-foot-10 senior who leads the NCAA in assists per game (8.5), was hurt in the first half against Xavier, needing help off the floor on two separate occasions. He said after the game that he felt a pop after landing awkwardly on a layup attempt.

"We are sorry to learn of the severity of Maurice's injury, but are thankful for his contributions since joining the Bluejay program three years ago," Creighton coach Greg McDermott said in a statement.

"Our team will regroup, and we have a lot of young men who are capable of stepping up to fill the void in Maurice's absence. Maurice's leadership role on our team will continue to be huge part of our success."

Watson told ESPN's Dana O'Neil thatwhen he woke up Tuesday the knee was swollen all over, and as a result he knew the injury was significant.

"My biggest thing is, I was finally going to play in the NCAA tournament and have that chance to enjoy that," Watson told ESPN. "Plus, I felt like with the draft upcoming, that would be my money maker. Even though I've had a great season I was looking forward to showing people what I could do on that stage."

Watson, who is from Philadelphia, had assisted on 44 percent of Creighton's made field goals when on the floor, the fifth-highest assist percentage in Division I, according to kenpom.com.He had games this season with at least 10 assists, the most in Division I.

The Boston University transfer also was averaging 12.9 points per game and shooting 46.9 percent from 3-point range.

Watson was in his second year as the Bluejays' starting point guard, and this season he fueled one of the nation's most efficient offenses. He posed problems for opposing defenses by quickly bringing the ball up the court, finding an open teammate or driving to the basket himself.

The Bluejays' tempo will slow down with Watson out. Senior Isaiah Zierden, who has been mostly a shooting guard, took over at the point after Watson left Monday's game. Freshman Davion Mintz also is in line for more minutes.

"I'm going to fight to get back," Watson said in the statement. "And my teammates need to keep fighting through the year. The fact that these guys battled through yesterday's game gives me confidence and security that they'll be able to go on and do great things. I intend to finish my college career and have a great impact, even if it's not on the court."

No. 7 Creighton (18-1, 5-1 Big East) is off to its best start in program history. It will host Marquette on Saturday.