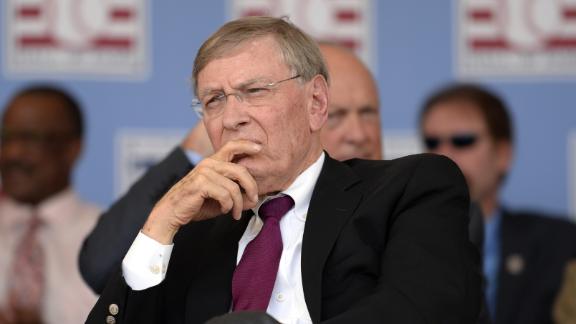 Major League Baseball and the players' union were scheduled to meet Friday to begin negotiations to establish new policies and punishments for domestic violence.

The recent spate of high-profile cases involving NFL players prompted baseball and the MLBPA to open talks about the way the sport should deal with such episodes -- even though the current collective bargaining agreement lasts through 2016.

Like baseball, other top professional sports organizations surveyed by The Associated Press -- including the NBA, NHL, NASCAR, PGA Tour and ATP -- have rules covering inappropriate or criminal behavior away from arenas but do not address domestic violence on its own.

"Creating policies that are clear and consistent, and also provide support services, is what these leagues need to do. I was encouraged by Major League Baseball's [step]," said Esta Soler, president of Futures Without Violence, a national group that works to prevent domestic and sexual violence and child abuse.

Soler said MLB reached out to her organization's San Francisco office this week.

"It's always better to be proactive than reactive, and some of the issues are coming out while we're having this public conversation because of what's happened in the NFL," Soler said. "It's much better to have clear guidelines, both in terms of whether somebody gets arrested and also, more importantly, how do you prevent domestic violence from happening to begin with?"

Baseball's CBA includes a voluntary treatment program for certain alcohol-related and off-field violent conduct. It also allows the commissioner or a team to impose discipline, but doesn't say of what sort, if a player is charged with a crime "involving the use of physical force or violence, including but not limited to, sexual assault, domestic violence, resisting arrest, battery, and assault."

"We view today's meeting as an important first step in working with the commissioner's office to address all of the issues connected to domestic violence," MLBPA spokesman Greg Bouris wrote in an email Friday.

In a statement issued by his office this week, outgoing commissioner Bud Selig said: "Domestic violence is one of the one worst forms of societal conduct. We understand the responsibility of baseball to quickly and firmly address off-field conduct by our players, even potentially in situations in which the criminal justice system does not do so."

Information from The Associated Press is included in this report.