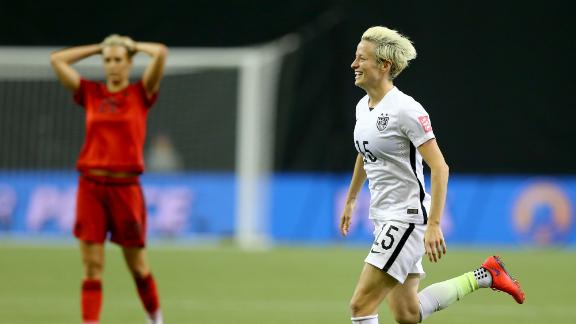 The United States, attempting to become the first women's soccer team to win FIFA Women's World Cup and Olympic titles in back-to-back years, announced its roster of 18 players for the Rio Games on Tuesday.

The U.S. women's national team will chase that history with a familiar cast, made all the more familiar by Megan Rapinoe's rapid return from a major knee injury. But it will also do so in Brazil with four players who were not part of the World Cup effort and a noticeably younger roster than that which enjoyed success a year ago.

The Olympic roster includes 10 of 11 players who started last year's World Cup final against Japan. One is midfielder and co-captain Carli Lloyd, who in 2015 won both the Golden Ball as the World Cup's outstanding player and FIFA Player of the Year. She also scored the goals that clinched gold medals in both the 2008 and 2012 Olympics.

Lloyd played 45 minutes as a substitute for the United States in a win this past weekend against South Africa, her first time on the field since spraining her right knee in a National Women's Soccer League game in April.

The roster includes midfielder Tobin Heath, forward Alex Morgan, defender and co-captain Becky Sauerbrunn and goalkeeper Hope Solo. Along with Lloyd and Rapinoe, each of those six players have appeared more than 100 matches for the United States.

It also notably includes Rapinoe, whose status was one of the biggest question marks leading up to the announcement. The 31-year-old midfielder has yet to play in a game for the United States in 2016 after tearing her right ACL in training before a December game in Hawaii that was subsequently canceled because of concerns about the playing surface.

That veteran core notwithstanding, this is the first U.S. roster for a major tournament since the 1999 World Cup that does not include a member of that iconic team. The United States was the oldest team in the 2015 World Cup, with an average age of 29.5. The average age of this Olympic roster is 27.8. Eleven players are making their Olympic debuts, and four will make their major tournament debut: Crystal Dunn, Lindsey Horan, Allie Long and Mallory Pugh.

Expected to begin her freshman year at UCLA after the Olympics, Pugh is the youngest player on the roster at 18 years old. Although she debuted for the national team in January, the youngest to do so in more than a decade, she leads the team with seven assists this year.

Among those not available were Abby Wambach and Lauren Holiday, both of whom retired after the World Cup, and forwards Sydney Leroux and Amy Rodriguez, out with pregnancies.

Rosters in Olympic competition are limited to 18 players, five fewer players than teams were allowed to include in last year's World Cup.

The United States is in Group G in the 12-team Olympic tournament, along with Colombia, world No. 3 France and New Zealand. The top two teams in each of the tournament's three groups advance to the quarterfinals, along with the two best third-place finishers.

The Olympic tournament will use seven stadiums across Brazil, with the women's gold-medal match scheduled for the Maracana in Rio de Janeiro on Aug. 19.