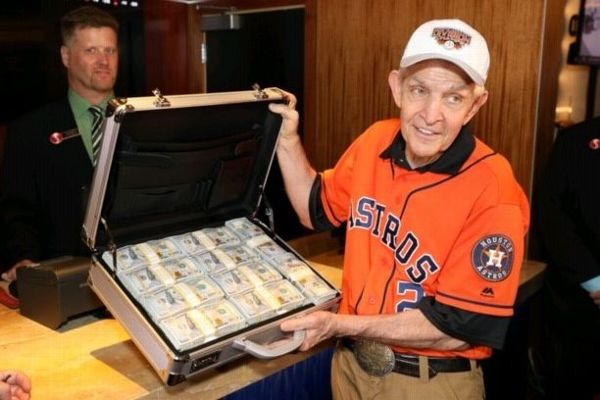 A Houston furniture salesman, attempting to mitigate millions of dollars in potential refunds from a promotion, placed one of the largest bets ever taken by a U.S. bookmaker on Tuesday at a Mississippi sportsbook.

Jim "Mattress Mack" McIngvale, owner of Gallery Furniture in Houston, bet $3.5 million on theHouston Astrosto win the World Series at the DraftKings sportsbook at Scarlet Pearl casino in Biloxi, Mississippi. At +220 odds, the wager would pay a net $7.7 million if the Astros win the World Series.

McIngvale wired the $3.5 million to the Scarlet Pearl on Monday and flew from Houston to Biloxi. He said Tuesday that the betting slip was in his pocket and joked that he'd probably keep it in his wallet, "which is secured by a bunch of rubber bands."

On Thursday, McIngvale was in New Jersey to place another large wager on the Astros to win it all. He bet $1.5 million at the same +220 odds at the FanDuel Sportsbook at The Meadowlands. The wager would win $3.3 million and is believed to be the largest legal online wager in the state's brief sports betting history.

McIngvale also recently placed a $200,000 World Series bet on the Astros +250 at the South Point in Las Vegas and has additional wagers for undisclosed amounts with Nevada bookmakers Caesars, MGM, Treasure Island and Circa Sports. He's shopping around for more, too.

McIngvale's $3.5 million wager at the Scarlet Pearl is nearly equal to how much was bet on baseball at Mississippi sportsbooks in June, July and August combined.

"I think it's the biggest [bet] that's ever happened in Mississippi," DraftKings chief revenue officer and co-founder Matt Kalish said.

Not only is it believed to be the biggest bet ever in Mississippi, it's also easily one of the largest wagers ever reported in the United States -- and McIngvale might not be finished.

McIngvale has been in communication with multiple sportsbooks in New Jersey, inquiring about making large wagers. In early September, bookmaker FanDuel, after discussions with McIngvale, requested approval from the New Jersey Division of Gaming Enforcement to accept a bet of greater than $5 million on the Astros.

"I'm just amazed how much DraftKings and Scarlet Pearl took, and they didn't blink an eye," McIngvale said. "That's pretty rare in the sports betting business in the United States for someone to take three and [a] half million dollars."

For much of the baseball season, McIngvale has been offering to refund mattress-related purchases of $3,000 or more if the Astros win the World Series. He ran a similar promotion in 2017 and refunded more than $10 million in purchases when Houston beat the Los Angeles Dodgers to win the franchise's first World Series. That year, McIngvale placed more than $1 million in bets on the Astros with Las Vegas bookmakers, helping him limit his exposure from the promotion. This year, with more states offering sports betting, he has expanded options, including Mississippi and New Jersey.

"It's a whole different game in 2019," McIngvale told ESPN last week, as he was shopping around for the best price and highest limits.

While a few $1 million bets regularly show up on the Super Bowl, multimillion-dollar wagers -- especially on the World Series -- are extremely rare:

In 2018, an unnamed bettor at an MGM sportsbook in Las Vegas placed a $3 million money-line bet on the Philadelphia Eagles to beat the Patriotsin Super Bowl LII. The Eagles pulled off the upset, and the bettor won a net $4.5 million.

In 1995, veteran Las Vegas bookmaker Jimmy Vaccaro says he took a $2.4 million money-line wager from prominent investor Carl Icahn on the heavily favored San Francisco 49ers (1-8) to beat the Chargers in Super Bowl XXIX. Icahn won a net $300,000 when the 49ers blew out the Chargers.

The Astros were down to +210 in DraftKings' odds to win the World Series after taking McIngvale's bet. The Dodgers are the second favorite at +260.

Before McIngvale's wager, more money had been bet on the New York Yankees to win the World Series at DraftKings than had been bet on any other team. The Yankees are +425.

"This does change the picture for us a little bit," Kalish said Tuesday. "This will make the Astros the biggest liability."

McIngvale, 68, is a beloved figure in Houston. He opened his furniture store to those in need during flooding caused by Hurricane Harvey and says he always roots for the Astros regardless of his position.

He declined to characterize how big of a liability he has on this year's promotion.

Gallery Furniture's liability from the promotion surpassed $15 million this week and was still growing, McIngvale said.

"I know these wacky promotions like this one, when people get their money back, it's the greatest publicity I could ever hope for," McIngvale said.

The Astros will host the winner of the Tampa Bay Rays-Oakland Athletics wild-card game in an American League Divisional Series.

In the weeks leading up to baseball's postseason, McIngvale hired two Las Vegas gamblers to help him locate the best price. Anthony Curtis, one of the gamblers, said McIngvale was looking to get down upward of $10 million on the Astros.

After Tuesday's bet, Mattress Mack is almost halfway there. 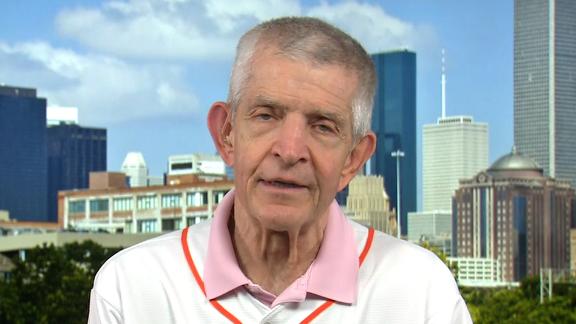