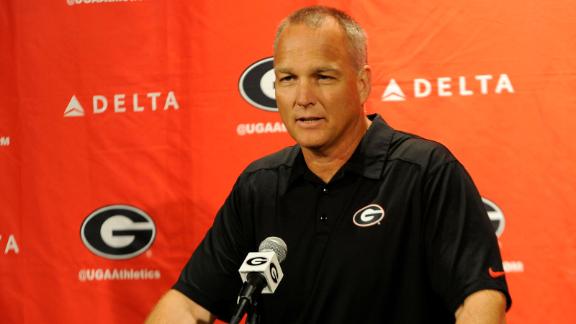 "It was a long, quiet ride for me, and it was a time to dig down deep and decide if that's what I wanted to do," McGarity said during a news conference Monday.

On Sunday morning, McGarity met with Richt for more than an hour and told him he wouldn't be returning as Georgia's coach next season. While the school said the sides mutually agreed to part ways, sources close to Richt indicated he wanted to continue to coach the team.

Richt, 55, was fired after compiling a 145-51 record in 15 seasons. He guided the Bulldogs to SEC championships in 2002 and 2005 and played for league titles three other times. He didn't win an SEC title in his last 10 seasons, which might have ultimately been his undoing.

The Bulldogs are 9-3 this season but beat only one FBS team with a winning record. Richt will coach Georgia in its bowl game.

"I just think that 15 years is a long time," Richt said. "I think the expectations have been built to the point that if you don't win a championship it's kind of miserable around here. If we don't make it to [the SEC championship game in] Atlanta, I'm miserable, too."

McGarity said UGA would begin its search for Richt's replacement immediately. McGarity said he would use a search firm in some capacity and that the search was "wide open."

Alabama defensive coordinator Kirby Smart, a former Georgia defensive back, is considered the leading candidate for the job. One high-ranking UGA official told ESPN.com that Smart, 39, had to be the "only choice." Smart has been the Crimson Tide's defensive coordinator for the past eight seasons and directed defenses that helped them win three national championships since 2009.

Ole Miss coach Hugh Freeze, Mississippi State coach Dan Mullen also could be candidates. Houston coach Tom Herman, believed to be a candidate, said Monday that he has agreed in principle on a new contract with the Cougars.

Richt said he would take the next couple of weeks to decide what he wants to do in the future. Georgia has offered him an opportunity to work in the athletic department, but he indicated that he would like to continue coaching. He is considered a potential candidate at Miami, his alma mater, and Virginia if he decides to coach next season.

"I love our fans and respect our fans," Richt said. "Our sport is a very passionate sport and it's a very public sport. The jobs that we do, everybody seems to have an opinion on it. You can't have all the excitement and cheering without the other.

"If things don't go the way people ... want them to go, I can understand people being disappointed and thinking there's a better way. I respect that. I think it got to the point where there wasn't enough confidence in my leadership to get it done. That's the prerogative of the people in charge, and I understand that."

McGarity said he anticipated there would be some backlash for firing a coach as popular as Richt.

"I expected it," McGarity said. "I think decisions of this nature are difficult. Mark has tremendous support. The way Mark connects with people, sure. It goes with the territory."