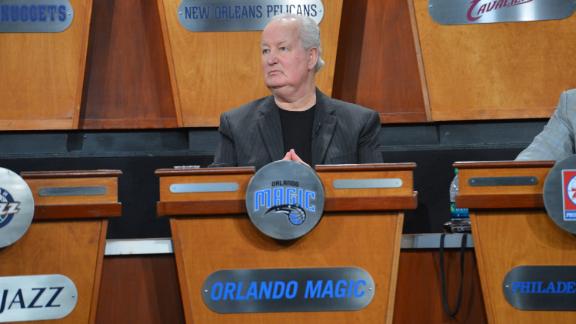 Think you can select the top 14 NBA draft picks in order?

If you live near Orlando, Florida, guessing perfectly can win you a lot of money.

The Magic announced a contest Wednesday in which they will give a local fan $100,000 for correctly picking the selections made in the lottery part of the 2014 NBA draft, which will take place June 26.

Each fan can make one submission through the team's website or by mail. Candidates must be 18 or older and live within a 75-mile radius of Orlando. Submissions are being accepted through June 22.

If multiple fans accurately guess the first 14 players taken, regardless of what teams take them, the $100,000 will be split among those winners. If no one wins, the Magic will randomly award two 2014-15 season tickets to a contest entrant. The team says the tickets have a retail value of $6,200.

Fans might want to look online before submitting their picks. Correct spelling is a condition of winning, so tripping up on Joel Embiid will cost you.

The Magic (Nos. 4 and 12 picks) are one of two teams, along with the Philadelphia 76ers, that have two picks in this year's lottery.

A fan is more likely to win the Magic promotion than the recent St. Louis Rams' schedule contest. The NFL team offered $100,000 to any fan who could guess which teams the Rams would play in 2014, by date and by venue. No fan came close, but the team awarded 2014 season tickets to two fans who had the best guesses.