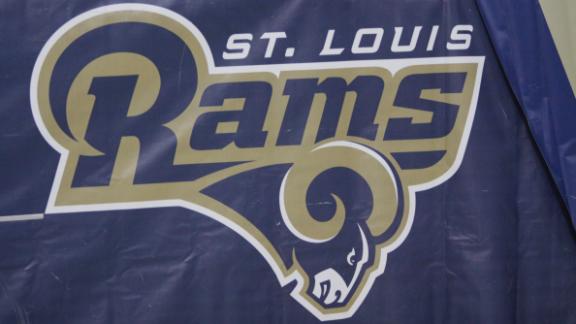 LOS ANGELES -- The St. Louis Rams could be headed back to Los Angeles as early as 2016.

Stockbridge Capital Group, which owns the 298-acre Hollywood Park site, already had plans for a mixed-use community on the land that formerly housed the famed thoroughbred racing track, which closed in late 2013.

Signature gathering will begin soon for an initiative that would place the "City of Champions Revitalization Project" on the Inglewood municipal ballot in 2015. if it passes, construction on the project would begin by the end of the year.

"This project is going forward," Inglewood mayor James T. Butts Jr. said at a news conference in front of Inglewood City Hall on Monday. "We're thrilled in the City of Inglewood. Here we are in in the position to build that field of dreams and hope that they'll come."

Butts said he spoke to Kroenke about the project over the weekend but would not comment on any conversations with the NFL.

As described in the ballot measure, the project will include a stadium of up to 80,000 seats and a performance venue of up to 6,000 seats while reconfiguring the previously approved Hollywood Park plan for up to 890,000 square feet of retail, 780,000 square feet of office space, 2,500 new residential units, a 300-room hotel and 25 acres of public parks, playgrounds, open space and pedestrian and bicycle access.

At a separate news conference at the Hollywood Park site, Chris Meany, senior vice president of Hollywood Park Land Company, said they were committed to beginning construction on the stadium with or without a commitment from an NFL team. The declaration, not to mention the involvement of a current NFL owner, sets it apart from other "shovel-ready" stadium proposals that have always first required a team committing to playing there before construction could begin.

"I've heard that there's a lot of talk about a lot of sites that have been out there for a very long time, for years and years and years," Meany said. "I don't see shovels in the ground on those projects. We're putting our shovels in the ground and going forward. This is the location in Los Angeles that for decades was the best location for sports and entertainment."

The stadium authorized by the ballot measure will be designed by HKS Inc., one of the world's leading firms for the design of sports and entertainment complexes. A successful ballot measure would shorten the time frame for Inglewood's approval of a stadium and would mean that professional sports could return to Inglewood by 2018.

Many proposed stadium plans have come and gone in the hopes of bringing the NFL back to Los Angeles after the city lost both the Raiders and Rams after the 1994 season, but none of those plans were ever backed by a current NFL owner capable of moving his team into the country's second-largest market.

The 80,000-seat stadium would be designed to house multiple teams and would be covered but open from the sides and be able tonot only hold football and soccer games but also be in the running to bid on events such as the Final Four and major prizefights. It would also conceivably be part of Los Angeles' bid to host the 2024 Olympics and possible future bids for the World Cup.

"We're going to have the most important, good-looking, best, state-of-the-art sports venue in the western United States, if not the world, and we'll be ready when people want to use it," Meany said. "We hope to attract more than our fair [share] of large-scale events here. I can't speak for what the NCAA would do, but we have designed a building that would be perfect to house the Final Four. ... We have not had any talk with the Olympic organizing committee, but we think we'll have a venue that will enhance Los Angeles' opportunities."

Meany and Butts were careful not to call the stadium an "NFL stadium" or claim that it was being built to house an NFL team, but it was clear that was the underlying expectation as a handful of Rams fans cheered from a distance during both news conferences.

"When the Lakers and Kings left [Inglewood], they left for what was a better offer," Butts said. "We're not trying to take anybody's team. These are businesspeople. They make business decisions. But if the best, newest stadium in the world is in Inglewood, I'd imagine that someone would be interested."

The Rams are expected to convert their lease at St. Louis' Edward Jones Dome to a year-to-year agreement later this month, and if the team and the city fail to come to an agreement to build a new stadium, the Rams could move back to the area they called home from 1946 to 1994.

On Monday, a representative of the two-man task force working on a St. Louis stadium proposal released a statement on behalf of former Anheuser-Busch president Dave Peacock and local attorney Bob Blitz.

"The news today is another reminder of how much competition there can be for National Football League franchises and projects that include NFL stadiums, but it does not change our timeline or approach," the statement read. "It is important to remember this will be a long-term process, but one that the State of Missouri and the St. Louis region are fully pledged to seeing through. We are ready to demonstrate our commitment to keeping the NFL here, and to continue to illustrate why St. Louis has been and will always be a strong NFL market. We will present a plan to Governor [Jay] Nixon this Friday as scheduled, and we expect that it will meet his criteria, thereby allowing us to share our vision with the public shortly thereafter. In the meantime, we will continue to have discussions with the NFL, as well as Rams leadership."

Developers of the Hollywood Park project said that no tax dollars would be used for the construction project -- including the stadium and more than 4 million square feet of retail, office, hotel and residential space -- which could be completed by 2018. Before construction can begin, however, the project must pass several political and environmental hurdles and the Rams must, of course, commit to moving back to Los Angeles after the 2015 season.

Any NFL franchise interested in relocating for the next season would have to apply between Jan. 1 and Feb. 15 of that year, according to league bylaws, and prove it has exhausted all attempts to remain in its current location. The earliest a team could relocate to Los Angeles would be January 2016, and that team would likely play in either the L.A. Coliseum or the Rose Bowl until a new stadium is completed.

NFL commissioner Roger Goodell said last month that no teams would be moving to Los Angeles for the 2015 season. The two teams that have always made the most sense to relocate to Los Angeles are the last two NFL teams to leave Los Angeles 20 years ago: the Oakland Raiders and the Rams.

The Raiders' lease to play at O.co Coliseum, formerly known as the Oakland-Alameda County Coliseum, has expired, and the team is now on a year-to-year agreement. Meanwhile, the Rams can get out of their lease agreement with the St. Louis Convention and Visitors Commission to play at the Edward Jones Dome, as well. The third team in play for L.A., the San Diego Chargers, can announce its intention to leave San Diego between Feb. 1 and May 1 of each year through 2020 if it pays an early-termination fee tied to the bonds used to expand Qualcomm Stadium in 1997.