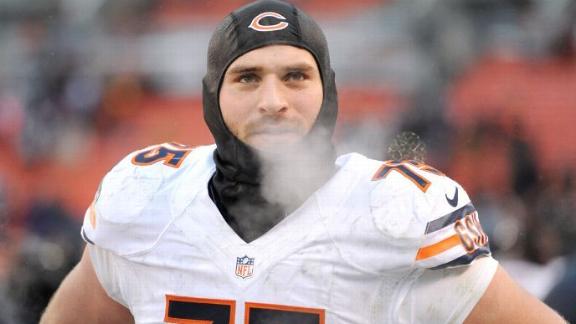 CHICAGO -- Bears Pro Bowl guard Kyle Long spent part of the weekend making good on a pledge he made to support 9-year-old Huntley, Illinois, resident Andrew Oyston, who has had to endure taunts from elementary school kids on the bus and in the classroom because of his weight for close to three years, according to his father.

"Apart from the fact that they are really big Bears fans, they just seem like really good people," Long told ESPNChicago.com on Monday. "You can only do and say so much to try and help your kid, but at a certain point you turn your child over to the school, and for most of the day, you just hope things go smoothly.

"Andrew is a really nice, smart and energetic kid. With any place, there is always going to be some bad apples that make things not go as well as you would like."

The bullying got so bad, said Andrew's father, Frank, that Andrew had to change schools.

Frank Oyston, who continues to search for ways to help his despondent son, has addressed the issue with the principal at Andrew's new school.

"It had reached the point where Andrew couldn't handle it anymore," Oyston told ESPNChicago.com on Monday. "He didn't know what to do. He didn't want to talk to anybody. The principal got involved and he obviously wasn't happy with it, but something had to happen because this wasn't stopping.

"As a parent, you want to do so much more in these situations, but you really can't. So I thought maybe I could get somebody else involved."

That somebody turned out to be Long, the Bears' 2013 first-round draft choice.

Oyston reached out to Long, an active participant on social media, on Twitter to see if he would help restore his son's confidence.

Long's response was immediate: "I'll ride the bus w him."

"I was shocked he got back to me so quick," Oyston said. "I sent the first tweet that said, 'I have a favor to ask of you because my son is being bullied on the bus,' and right after I sent that I started typing another tweet asking Kyle if he could just talk to Andrew, and before I could hit send, Kyle had already gotten back to me saying he would ride the bus. That's how fast it was. It was amazing."

It proved to be impractical for Long to show up at the fourth-grader's school or ride the bus with him, and the sides spent several weeks trying to pin down a time when Andrew and Long could speak face to face, once the 6-foot-6, 313-pound offensive lineman returned to the Chicago area from his offseason home in California.

"Initially I just saw a dad that was in a tough spot with a kid that was obviously going through some things," Long said Monday. "As somebody that didn't have the best elementary and middle school experience, I can relate a lot to what Andrew is going through. I didn't know his specific situation, but the riding of the bus deal was kind of tough for me as well [as a child].

"I wanted to jump on this as soon as I could. We took about a couple months for everything to come to fruition and for me to meet the kid. But it was worth it. It was good for both of us."

The long-awaited meeting occurred Saturday at a Chuck E. Cheese in Crystal Lake, Illinois, where the Oystons were celebrating their daughter Riley's 8th birthday.

"Thanks for letting me come hang, great kid!" tweeted Long, who included a Twitpic.

- Kyle Long (@Ky1eLong) May 4, 2014"He wanted to spend a day with the family and asked about Saturday," Oyston said. "We told him it was our daughter's birthday party at Chuck E. Cheese, and he was more than welcome to come. He told us it was fine, and he was totally down for some Chuck E. Cheese.

"Andrew didn't know too much about Kyle Long at first, obviously, and we told him and he didn't believe us. It took a couple of days for it to sink in that somebody from the Bears was coming to talk to him, so he started reading up on Kyle and his background. He was very excited to learn about Kyle. But on Saturday, he was nervous."

Long did not disappoint at the party.

"Kyle was amazing with the kids," Oyston said. "He was playing games with all of them and following them around. He took pictures with my daughter. Andrew and he even held our 16-month-old son. It was really amazing.

"He came back to the house for a little bit after the party and signed some pictures. He even asked the kids if they wanted to go outside in the backyard and throw the football around. That was the kids' favorite part: playing catch with Kyle. Running around and throwing the football with him, the kids thought that was just amazing. All day yesterday my kids were outside playing catch and pretending they were Kyle Long."

"I'm surprised she doesn't stand up and beat up all the bullies. She's a tough little girl," he said.

"There was no point and time when we sat down and had a serious conversation," Long said of Andrew. "He just needed somebody to hang out with and have a strong male presence, like an older brother-type deal. If that's the role that needs to be played, I have no problem with that. He's a really great kid.

"It's always fun to have a little brother," Long said, adding that he "absolutely" will stay in touch with the family.