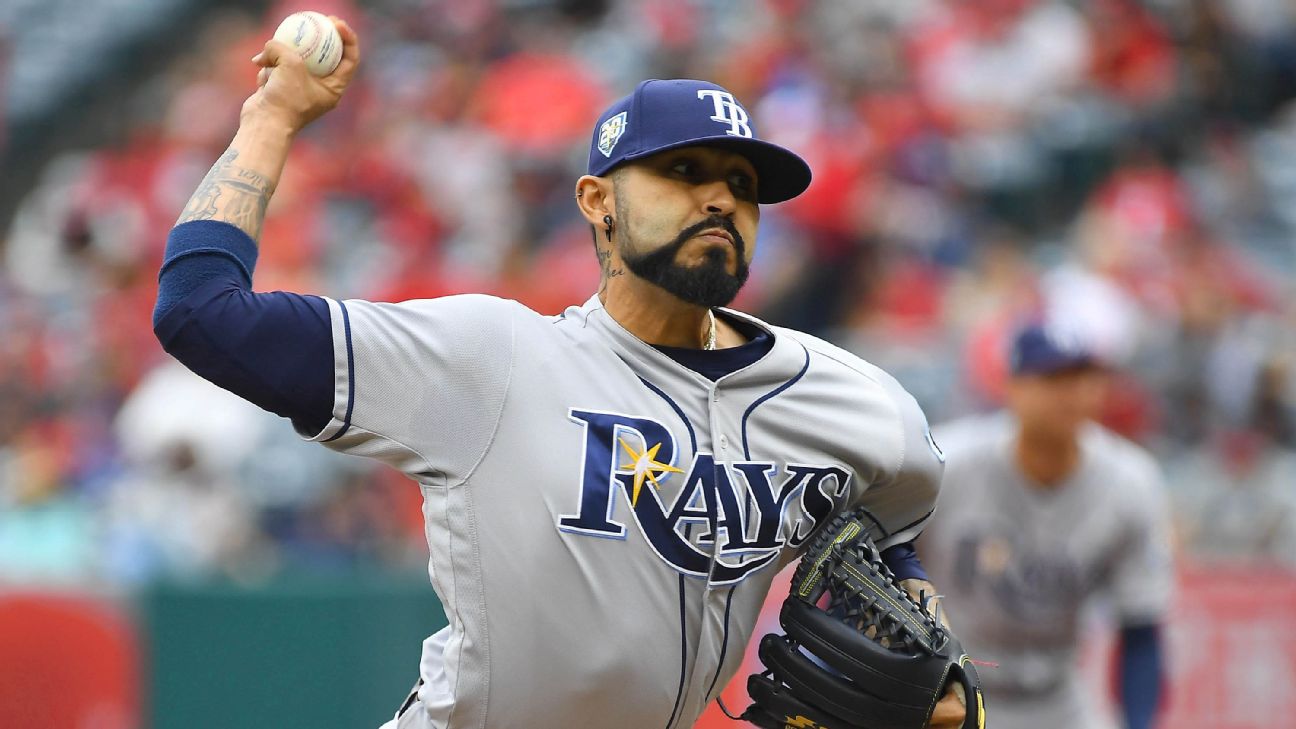 The most interesting news from the weekend was Sergio Romo's starting consecutive games for the Tampa Bay Rays. It was pretty unusual for two reasons: (1) Romo's previous 588 career appearances in the majors all came in relief, and (2) he became the first pitchersince Steve McCatty of the A's in 1980 to start on consecutive days after pitching at least one inning the first day.

Of course, Romo wasn't used like a regular starting pitcher. He pitched one inning on Saturday, striking out all three batters he faced. He got four outs on Sunday, walking two and striking out three and surviving with no runs allowed. The Rays beat the Angels 5-3 on Saturday before losing 5-2 on Sunday.

The Rays have been doing intriguing things with their rotation all season, at least at the back end of it. They've skipped the fifth starter a couple of times to keep the main starters -- Chris Archer, Blake Snell andJacob Faria-- on their regular four days of rest. The most curious aspect has been using the fifth-starter slot as a de facto bullpen game, with the "starter" going just two or three innings several times, even when pitching well enough to remain in the game.

None of that compares to the unique deployment of a career reliever, however, an event strange enough that it requires a deeper dig.

Why did the Rays do this?

It was a strategic decision made possible in part because of the Angels' right-handed-heavy lineup. With Shohei Ohtani not hitting either day, the only lefty in the lineup on Saturday was Kole Calhoun, and the starting nine on Sunday were all right-handed. Romo, with his sub-90s fastball and big, sweeping slider, has always been much better against righties, and his platoon splits have been even wider in recent seasons.

Some of that was avoiding the lefty-righty matchups against the Angels' best hitters, which gets into the third-time-through-the-order penalty. To jog your memory, in general, starters fare worse the third time through the order. Here are the numbers for this season:

As pitch counts go down and the percentage of innings to relievers goes up, starters -- especially the back-of-the-rotation ones -- often don't make it through 27 batters. The average stint in 2018 is just a shade over 23 batters. That means going through the lineup twice and then facing the first five batters a third time. The most batters Yarbrough had faced this season was 22. Well, if you're going to face only a few batters a third time as you're tiring, it makes more sense that those are the 5-6-7-8-9 hitters in the lineup rather than 1-2-3-4-5.

As Rays manager Kevin Cash said before Romo's first start, "It allows us, in theory, to let Sergio come in there and play the matchup game in the first, which is somewhat unheard of -- up until Saturday, anyway."

On Saturday, Yarbrough came on in relief, pitched well and allowed one run in 6 innings, facing a season-high 23 batters. The plan looks like gold when the pitchers execute.

On Sunday, Matt Andriese followed Romo and came on for two innings, allowing two unearned runs, and two other relievers finished it off. Anthony Banda, another lefty who might have otherwise started, pitched the final 3 innings.

Another benefit to using a reliever like this is that it guarantees that a good reliever appears when the game is close. A tie game at any point is at least a medium-leverage situation. Obviously, a tie game in the first inning isn't the same leverage as a tie game in the ninth, but it's an important inning -- maybe the most important. Because it's the only inning in which you can guarantee who comes up; it's also the highest-scoring inning. The rate of runs in the first inning in 2018 is 5.27 over nine innings; the second-highest-scoring inning has been the sixth, at 4.91 per nine innings. The second inning is the lowest, at 3.70 runs per nine innings.

The question, though: Which reliever? Romo was a perfect guy to use because he's good against righties, but he's not your closer, and he's not your primary setup guy. Would it be worthwhile to use your best reliever like this? To answer that, we have to understand leverage indexes. FanGraphs has an in-depth explanation, and another look can be found at Tom Tango's complete leverage index table.

Of course, when a game starts, you don't know what the score is going to be in the ninth inning. Using bullpens is complicated! It's safe to say managers want to keep their security blankets for later in the game and those potential highest-leverage moments. So maybe the Romo strategy is best used with your third- or fourth-best reliever.

Is this a wave of the future?

I have no idea. You're not going to see it with Max Scherzer or Corey Kluber or even Archer, Snell or Faria, but I think it does make sense for the Ryan Yarbrough types, who are unlikely to give you seven or eight innings and are going to be more vulnerable that third time through the order.

If anything, I think the future of rotations is something like three starters used in regular turns, guys you're hoping to get seven innings from. The other two rotation slots become more of a grab bag -- shorter stints like what the Rays have done or now with a Romo-type starter for the first inning or two.

The catch there, even with eight-man bullpens, is you need those hybrid starter/relievers who can throw multiple innings. You can't have eight one-inning guys in the bullpen, otherwise they're going to lose effectiveness from overuse (and extra-inning games present a whole other problem). Lefty specialists probably will become a dying breed for the most part because you can't carry a guy who gets five outs a week when you require so many relief innings.

Bottom line: My gut says there's something here, while acknowledging the Angels are particularly susceptible to this strategy. But maybe it's just a different way of using a bullpen instead of a better way. Either way, give credit to the Rays for thinking outside the box.

Of course, the best option is probably just to have a rotation with Justin Verlander, Gerrit Cole, Lance McCullers Jr., Charlie Morton and Dallas Keuchel.