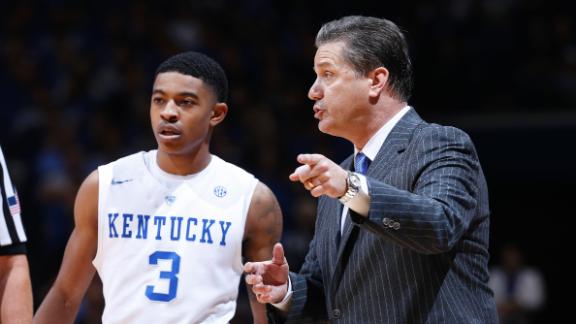 The nation's two unbeatens retained their spots atop The Associated Press Top 25.

For the second straight week, the Kentucky Wildcats were No. 1 in 63 of 65 votes cast Monday, while Virginia stayed at No. 2.

The Wildcats (17-0) have been No. 1 in every poll and were the unanimous choice for five straight weeks before two voters switched to the Cavaliers (17-0) last week.

Both teams had a pair of double-digit conference wins last week.

"They're obviously the No. 1 team in the country for a reason," Alabama coach Anthony Grant said after a 70-48 loss to the Wildcats on Saturday. "You look at the size, the length, their ability to defend. It was difficult to find quality shots against them."

Gonzaga remained in third, while Villanova swapped places with Duke. The Blue Devils fell from fourth to fifth after a loss to Miami, which ended a 41-game home winning streak, and a win at Louisville.

Only five matchups between Top 25 teams are scheduled this week, with No. 11 Kansas hosting No. 19 Oklahoma on Monday. The Jayhawks also visit No. 17 Texas while the Sooners visit No. 21 Baylor on Saturday.

The No. 6 Badgers are the only top-10 team with such a matchup, hosting No. 25 Iowa on Tuesday. Also in the Big Ten, Indiana faces No. 13 Maryland on Thursday.

Kentucky Continues Unbeaten March
Dino Gaudio examines Kentucky's upcoming schedule and points out two guards who could be the key to an undefeated season.