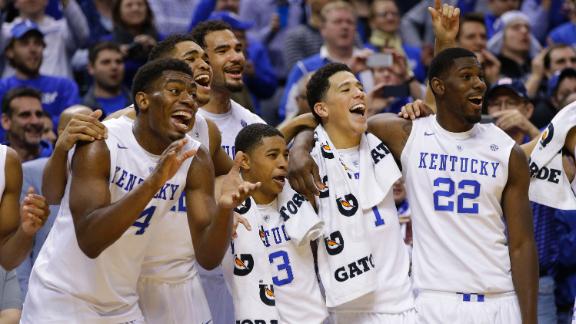 The Kentucky Wildcats are the unanimous No. 1 in The Associated Press Top 25 for the second straight week.

The Wildcats (23-0) were the unanimous pick last week after Virginia lost, and the nation's only unbeaten team again received all 65 votes from a media panel Monday.

Virginia reclaimed the No. 2 spot this week, leapfrogging new No. 3 Gonzaga, after beating No. 12 North Carolina and No. 9 Louisville.

Not all was good for the Cavaliers (21-1), however, as they lost leading scorer Justin Anderson to a fractured finger on his left (shooting) hand. He had surgery Monday and may miss four to six weeks for Virginia, which has held opponents scoreless for at least five minutes 20 times this season.

Villanova moved up to No. 6 after No. 7 Arizona lost to rival Arizona State for the only other change in the top 10.

Kentucky, which trailed by as many as nine points in Saturday's 68-61 victory against Florida, has played in five games this season that have been decided by 10 points or less.

The No. 1 Wildcats play at LSU on Tuesday night.

Texas and Georgetown dropped out of this week's poll.

Don't Overlook Gonzaga
CBB Live Extra: Adrian Branch explains why Gonzaga is still the most underappreciated team in the country, even though the Zags are ranked in the top five.

Cauley-Stein Leading Kentucky
Andy Katz examines Willie Cauley-Stein's freakish athletic ability from the football field to the basketball court. After missing Kentucky's run to the NCAA title game last season with a broken ankle, he's back in hopes of taking Kentucky all the way.